It has been two-and-a-half decades since the Central Zoo Authority was set up to improve the lot of zoo inhabitants. Then why are animals still languishing and dying? 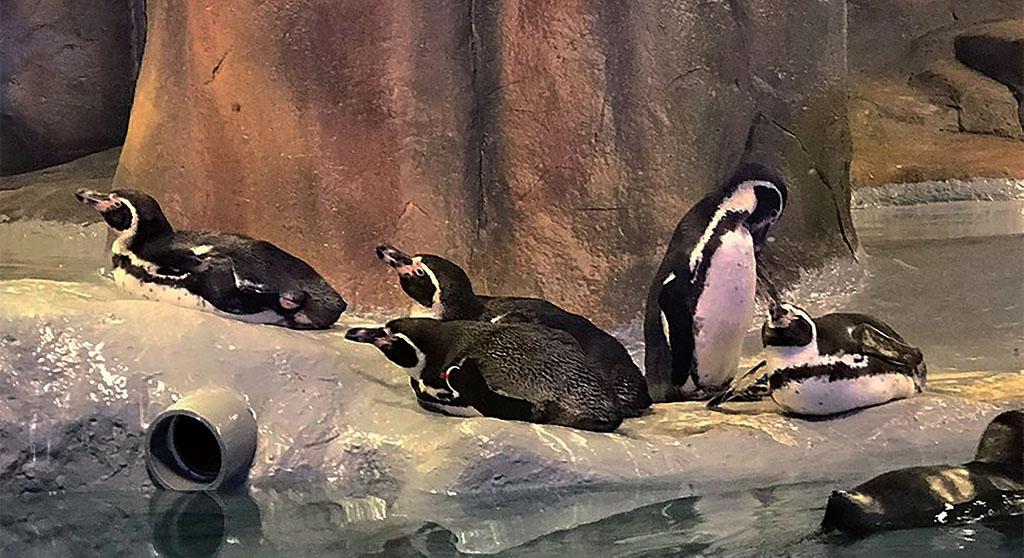 For years, Lakshmi, 64, and Anarkali, 56, have been standing there almost like a figurine, bound by chains and isolated in individual cramped, concrete enclosures. The pool nearby keeps leaking and holds barely enough water for the giant Asiatic elephants to wallow and keep themselves cool. In a nearby cage, a rhesus macaque with contagious mange is freely mingling with other monkeys, at times scratching its rear vehemently against the rusted enclosure, oblivious of the fact that it can lead to severe tetanus infection. At one corner, over two dozen deer huddle in fear with barely anything to graze on. The picket gate that takes visitors dangerously close to striped hyenas remains tied with an old rag cloth. Welcome to the Veermata Jijabai Bhosale Udyan and Zoo of Mumbai. Located in the city’s southern neighbourhood of Byculla, it is one of the country’s oldest zoos, dating back to the 1860s. While the authorities have managed to retain the grandness of its entrance, the zoo is being increasingly described as a “killer zone” with mammals, birds and reptiles dying in care. Media reports show over 480 inmates have died at Byculla zoo since 2010. The list includes exotic and protected species like emu, finches, hippopotamus, penguin, African grey parrot, a lioness and crocodiles. In 2016-17, it was left with 388 animals. While officials at the zoo claim that a majority of deaths are owing to old age, what could be the possible explanation for the high number of deaths at Delhi’s National Zoological Park, set up only in 1959!

Sprawling over 75 hectares (ha) against the majestic backdrop of the Purana Quila, the National Zoological Park appears to fulfil both the objectives with which a zoo is set up—education and conservation. “Initially, it was thought that recreation is the only aim of zoos, but now education is our motto,” reads the website maintained by the zoo authority. While its lone African elephant, white tigers, birds of foreign feathers and several other rare species attract visitors from all over the country and abroad, sensitising them about species in the wild and their needs, the zoo provides training to veterinary and wildlife management students and Indian Forest Service probationers. From time to time, successful captive breeding of endangered brow-antlered deer and white tiger also brings the zoo to limelight. But despite the success, the living condition of its exhibits is no better than those at Byculla zoo, or, for that matter, in any other zoo (see ‘Care denied?’). In 2016-17, as many as 325 exhibits at Delhi zoo died due to reasons like tuberculosis, shock and senility. Only 1,202 are remaining now. Its security measures were heavily criticised in 2014 when a man fell into the enclosure of the white tiger named Vijay and died after being mauled by it.

“The condition of zoos is pathetic in the country,” admits a highly-placed official with the Central Zoo Authority (CZA), an autonomous body constituted under the Wild Life (Protection) (Amendment) Act, 1991. “I am definitely going to join the anti-zoo movement post-retirement and lobby for closure of zoos,” he tells Down To Earth. But wasn’t CZA set up to ensure better upkeep and care of captive animals? 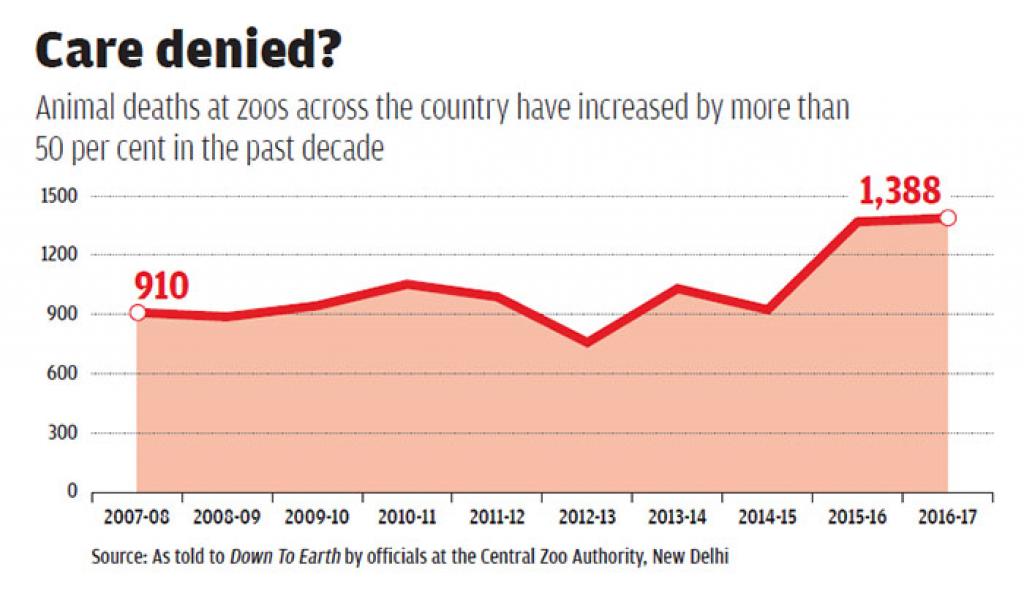 Ambitious but toothless
Hopes were high when CZA came into being in 1992. To give it proper direction, the Union government in 1998 introduced the National Zoo Policy. Living up to its mandate, CZA in the past three decades has derecognised and shut down some 350 zoos that failed to improve or did not adhere to the prescribed standards. To ensure that the 167 recognised zoos are up to the mark,  CZA’s scientists conduct regular assessment of their functioning. Then, why has nothing much changed on the ground?

Animal rights activists list out a few reasons, and one of the primary issues they cite is the poor health of their exhibits—not just physical but also sexual and psychological. “Risk factors such as overcrowding, lack of space, filthy cages, unnatural environment, no enrichment and the prevalence of infections and diseases are inherent to a zoo scenario,” says Manilal Valliyate, who heads animals rights organisation peta-India. Because of loneliness and lack of access to their own kind, some also exhibit zoochosis—a stereotypical behaviour of chewing their own body parts, rocking, swaying or birds plucking their own feathers. But the problem stems from the fact that zoos in India do not even provide basic veterinarian care to their inmates. For instance, adds Valliyate, several zoos do not have permanent vets, let alone round-the-clock veterinary facility. Though dosage of a medicine has to be carefully calculated based on body weight, many zoos do not follow the protocol. More often than not drugs available with them are past their expiry date. Sterilisation of instruments used in operation can only be anyone’s guess. All these contribute to the high mortality of animals in zoos, he adds.

Gauri Maulekhi, animal rights activist in Delhi, offers another insight into the way zoos function. “In the absence of full time veterinarians, zoo authorities tie up with the animal husbandry department for treatment of their inmates. Since they are not trained in wildlife care, this leads to dangerous consequences,” she says. In 2006, at least 14 sloth bears at a bear centre near Agra died of rabies despite being vaccinated against the disease. A rhinoceros had died at Lucknow’s Nawab Wajid Ali Shah Prani Udyan of the same reason.

B M Arora, retired veterinarian who has served at various zoos, agrees with Maulekhi. “Zoos often use vaccines meant for domestic livestock to treat wild animals. Anti-rabies vaccine used for dogs is used for a tiger,” he says. Since infections like rabies and tuberculosis are rampant among zoo inmates, Arora wonders why the government does not develop vaccines for wild animals. But these are just wishful thinking in a country where only two of the 50-odd veterinary colleges offer courses on wildlife.

India also lacks in people skilled in zoo welfare or zoo science, says Vivek Menon, who heads conservation organisation the Wildlife Trust of India (wti). “While I was with CZA, a proposal to set up a centre for teaching zoo science was mooted and we all supported that. But it never saw the light of day. It is important to create a cadre of people trained in zoo science. Those in forest service do not necessarily know about captive animals. Biologists or zoologists know about wild animal conservation but may not know about captive animal behaviour. In India, less than a dozen people have expertise on zoo science. As a result, you find the same people in every committee, every inspection and every work of expertise. And this leads to a dearth of ideas,º says Menon. He also lays emphasis on training the junior staff. “We do not care for them, don’t give them the credit they require, nor the pay, the skills or the training. In Europe, people with Master’s degree work as zoo keepers. Here, our keepers are basically untrained labour,” he adds.

A well-trained staff can not only take care of the inmates’ health but also ensure that zoos do not get overcrowded due to unchecked breeding. Since sterilisation of wild animals is a complicated procedure, the only solution CZA offers is exchange animals between zoos.

Jon Coe, a zoo designer in Australia with 50 years of international experience,  says the challenges faced by Indian zoos are not limited to the country. However, the problems are more pronounced in developing countries due to a shortage of well-trained professionals and workers, he says.

Finance and empower
So is there a way to improve the condition of zoos in India or should they be closed, as demanded by several conservation groups? While conservationists are still divided over it (see ‘Point-counterpoint’ below), they say giving more teeth to CZA can at least provide immediate relief to the exhibits.

“CZA has little money to have any sort of clout among zoos. Zoos provide lack of finance as an excuse for not complying with the standards. If CZA is to become more than a paper authority, it should have some ability to fund them,” says Menon who has been on the board of the National Tiger Conservation Authority and the Project Elephant. “When there is money, the states listen to you,” he adds. When asked why CZA is under-funded, Menon has a ready answer: “The Union environment ministry is allocated a very small budget when compared to other ministries. Its wildlife wing receives a small percentage of this budget. CZA is thus a neglected child.”

Maulekhi says CZA does not have sufficient humanpower to oversee the functioning of all the 167 zoos and 16 wildlife rescue centres spread across the country. Ideally, there should be state-level regional centres of CZA who can closely monitor zoos and wildlife centres under them.

CZA should also strive to bring about a change in the attitude of people as well as policy-makers towards zoos. For instance, the Brihanmumbai Municipal Corpora-
tion (bmc)-run Byculla zoo bought eight Humboldt penguins from Seoul in 2016 despite the fact that the city’s hot and humid weather is not suitable for the birds. Animal rights activists allege that the penguins were brought as Uddhav Thackeray, president of Shiv Sena which rules bmc, had promised those in his party manifesto. One of the penguins, Dory, died within three months of reaching in the alien climate. Byculla zoo authority now spends tens of crores of rupees to provide controlled environment to the South American birds.

Zoos are not entertainment places. These are not parks where one takes a child to watch something funny. These are places where you get scientific education. But that attitude is lacking in India, says Maulekhi. Not a single zoo in India runs as an educational centre, and very few disseminate facts and figures about wild animals. To make this possible, CZA should conduct national level workshops for directors and other officials who run the zoo, she adds.

Menon says CZA has got almost quasi-judicial powers. If it can be made stronger and the number of zoos is reduced to a manageable number, and any shortcoming punished, the condition of Indian zoos can improve phenomenally.

It is a combination of beautiful landscaping and surrounding vegetation, scientifically documented plants and animals, wrote British statesman Sir Thomas Stamford Raffles in the early 1800s in the praise of India’s first zoo Barrackpore Park near Kolkata. Inspired by Barrackpore Park, he went on to establish the London Zoo in Regent’s Park, dubbed the world’s first modern zoo. One only hopes that Indian zoos can resurrect this lost glory.