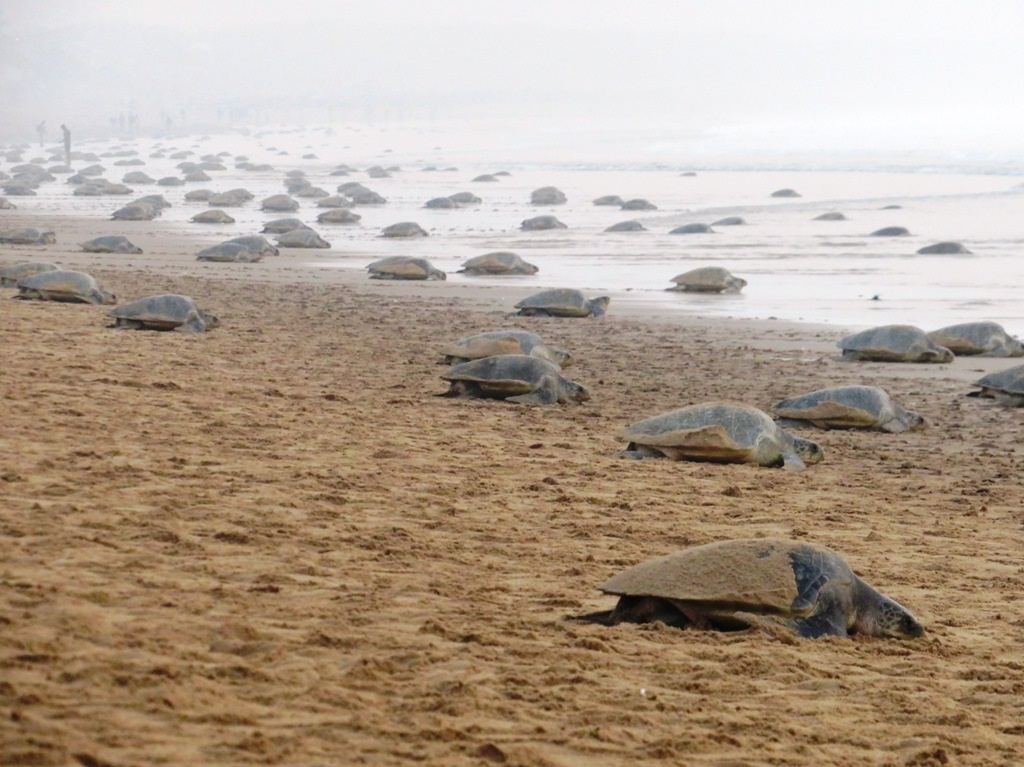 Olive Ridley (Lepidochelys olivacea), one of the smallest sea-turtles on the earth, may be fighting a losing battle against climate change. Global warming and extreme weather events may lead to a decline in their population over time, according to conservation experts.

On Odisha’s Rushikulya beach, one of the biggest nesting sites of the turtles in the world, more frequent and intense flooding and cyclones have been posing a great danger to these already vulnerable marine reptiles.

“Around 25 per cent of the eggs got washed away during the tidal surges of Asani earlier this month,” said Sumanth Bindumadhav, acting country director, Humane Society International / India, to Down to Earth.

Around 100,000 nests per year are found in these three beaches of Odisha every year. They are also found in Costa Rica and Mexico.

After extreme weather events, a lot of sand gets deposited on the nesting beaches, burying the remaining eggs deeper than where the mother had laid them, according to Bindumadhav. “The hatchlings are unable to dig their way up from such thick layers of sand and die.”

Only one in a thousand hatchlings make it to adulthood because the hatchlings face several other threats in the ocean, according to World Wildlife Fund for Nature. This ratio may worsen if the frequency of extreme weather events continues.

Studies estimating the impacts of climate change on Olive Ridley population are going on across the world, and it is feared that the increase in tidal surges and cyclones, especially near nesting beaches may lead to a decline in population, said said Suresh Kumar, senior scientist at Wildlife Institute of India.

We have sufficient evidence to conclude that we lose hundreds of eggs at a time when they get washed off by the tides or get buried deep in the sand, however we do not have conclusive results of these studies yet.

Apart from eggs getting destroyed, the rising global temperatures and climate anomaly may throw the gender ratio of hatchlings off balance, thereby posing yet another threat to their population.

The sex of the Olive Ridley turtles is determined by the temperature at which they are hatched. A male turtle is born if the egg hatches at a temperature below 29 degrees Celsius. Above that, the hatchling is a female.

The turtles lay eggs in layers to ensure temperature difference among eggs, so that the gender ratio is healthy, said Bindumadhav.

There is some evidence that the climate crisis has had an impact on the ridley eggs but how it is altering the gender ratio is being studied. A warming planet may not simply mean more female hatchlings, according to studies.

Though studies are going on around the world results to understand if the sex ratio of Olive Ridley turtles is being skewed because of global warming, results have thus far been inconclusive so far. The turtles sometimes nest twice a year, probably to maintain a healthy sex-ratio. More research needs to be done on this.

There was a 7 per cent per decade decline in the Costa Rica nesting population over the 21st century, according to a 2012 study published in Nature Climate Change journal. But the sex ratio of the hatchlings didn’t change substantially in the study period, it said.

Another study published in the Endangered Species Research journal in 2018 found that nests didn’t produce hatchlings when incubated at or above 35 degrees Celsius temperature.

Solitary nesting of olive ridleys have declined in Bangladesh, Myanmar, Malaysia and Pakistan, according to estimates of NOAA Fisheries. The number of nests in Terengganu, Malaysia, has declined from thousands to just a few dozen per year in a 5-year review published in 2014.

Due to a lack of reliable estimates, it is however difficult to predict how much the decline can be at a global level.

“Since we only see the ones that nest, it's nearly impossible to estimate how many are in the ocean. The nesting population size data is used to deduce the health of the species overall. But I can tell you that the rough population estimates are upwards of 10 million globally,” said Bindumadhav

They're called Olive Ridleys get their name from the olive green colour of their shell.  They can grow up to two-and-a-half feet in length and weigh 30-45 kilograms. They feed mainly on shrimp, crab, molluscs, fish and crabs.

In India, they congregate on the beaches of Odisha and Maharashtra to lay eggs — a phenomenon called ‘arribada’, which means ‘arrival by the sea’ in Spanish.

Experts say that turtles form a bridge between the terrestrial and marine eco-systems, allowing us to learn more about oceans. This is one of the many reasons their conservation is of utmost importance.