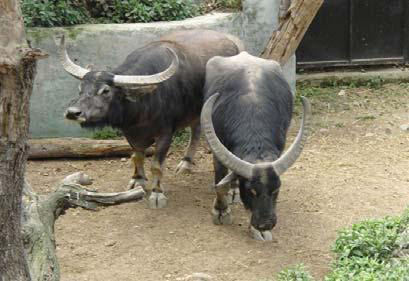 Recent pictures of a herd of wild water buffalo in a Maharashtra forest, published by a news daily, have raised hopes about revival of the near-extinct species. The animal that was found in Kolamarka area of Gadchiroli district this month has been listed as “endangered” by the international non-profit International Union for Conservation of Nature and Natural Resources, since 1996.

The buffalo is mainly found in Assam, Chhattisgarh, Maharashtra, Meghalaya, Madhya Pradesh and Arunachal Pradesh. Recent reports have suggested the presence of only one female Asiatic wild water buffalo or the wild water buffalo in Chhattisgarh, where it is known as the state animal. Years of neglect and shortage of funds have been blamed for near-extinction of the species. Domestication and unceasing interbreeding with domestic buffalo have been cited as other reasons by the experts.

“Our photographs, taken between January and May, have shown presence of three to five females,” said Prabhunath Shukla, deputy conservator of forests, as quoted by Indian Express. The herd was accidentally captured by forest staffers while monitoring another animal, the news daily reported.

Not long ago, in response to the alarming diminution in its population, the environment and forest ministry had asked Chhattisgarh government to submit a conservation plan to protect the endangered buffalo. Meanwhile, environment minister Prakash Javadekar had recently mentioned about the feat achieved in the form of artificial birth of a wild water calf in Punjab Agricultural University, Ludhiana. This was made possible by cloning that was carried out by the scientists of
National Dairy Research Institute (NDRI), Karnal.