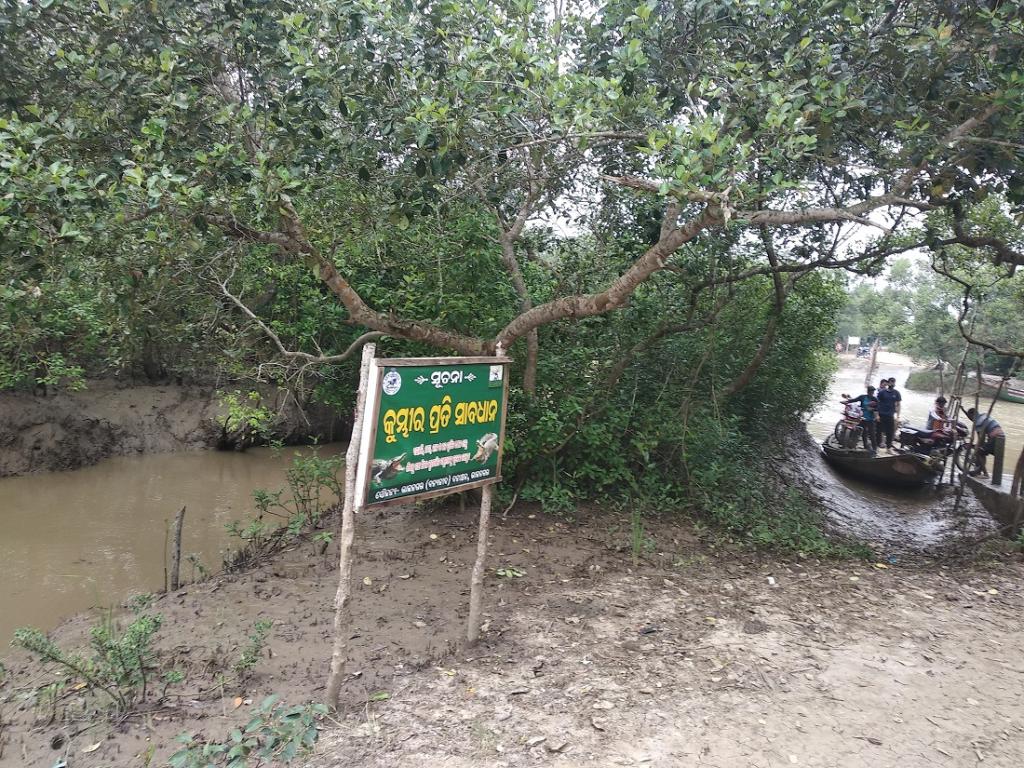 A sign board of the Odisha forest department in Bhitarkanika stating ‘Beware of Crocodiles’. Photo: Ashis Senapati

Odisha’s Bhitarkanika National Park, the second-largest mangrove forest in India after the Sundarbans, is known for a successful saltwater crocodile conservation programme. The park had 1,784 salties as of January 2022. Now, experts on the species say the park has reached a saturation point, which could prove to be a big headache if not addressed soon.

Figures and statistics seem to agree with their view. As many as 50 people have been killed by crocodiles since 2012 in and around the park, while 25 crocodiles died during the same time after entering human settlements or getting caught in fishing nets.

“The crocodile is a territorial aquatic reptile. If you pack too many into a small space, there will be increased competition for food, mating partners, basking sites and for all other things that are important for crocodiles to survive,” BC Choudhury, a former wildlife scientist from the Wildlife Institute of India, Dehradun, told this reporter.

He noted that this was the reason why there was a ‘crocodile carrying capacity’, which was defined and decided by space as well as the availability of fish and other prey.

“The crocodile population has reached a saturation point in Bhitarkanika since a long time. The then-Union Ministry of Forest and Environment in 1991 had directed the state forest department to stop the crocodile rearing programme in Bhitarkanika. A high population density means higher incidents of conflict with humans. Many crocodiles venture out from the water, particularly during the rains,” he said.

The focus should now be to check human-crocodile conflict. An increased crocodile population brings new challenges for fishing and human-animal conflict is key, added Choudhury.

“The crocodile conservation project in Bhitarkanika was started in 1975. Its main objective was to protect the reptiles’ natural habitats and to rebuild the population quickly through captive breeding as the survival rate of crocodile hatchlings in nature is low because of predation,” Sudhakar Kar, a noted herpetologist and researcher of forests and wildlife with the Odisha forest department, said.

“But the forest department annually collects eggs from nests to breed them in the crocodile breeding complex at Dangamala within the park for tourists, researchers and herpetologists,” Kar added.

JD Pati, the divisional forest officer of Bhitarkanika National Park, also noted that the crocodile rearing programme had been stopped over two decades ago.

Human-crocodile conflict continues to rise in Bhitarkanika. Four people were killed in separate attacks by estuarine crocodiles around the park between May and July 2022.

Crocodiles were often seen invading the riverside villages across the rivers in Aul, Rajkanika, Pattamundai, Mahakalapada and Rajnagar blocks of Kendrapara district around Bhitarkanka as well as Chandabali and Tihidi block in Bhadrak district far away from the park’s water bodies, he added.

This could be a ticking time bomb, if the experts are to be believed.