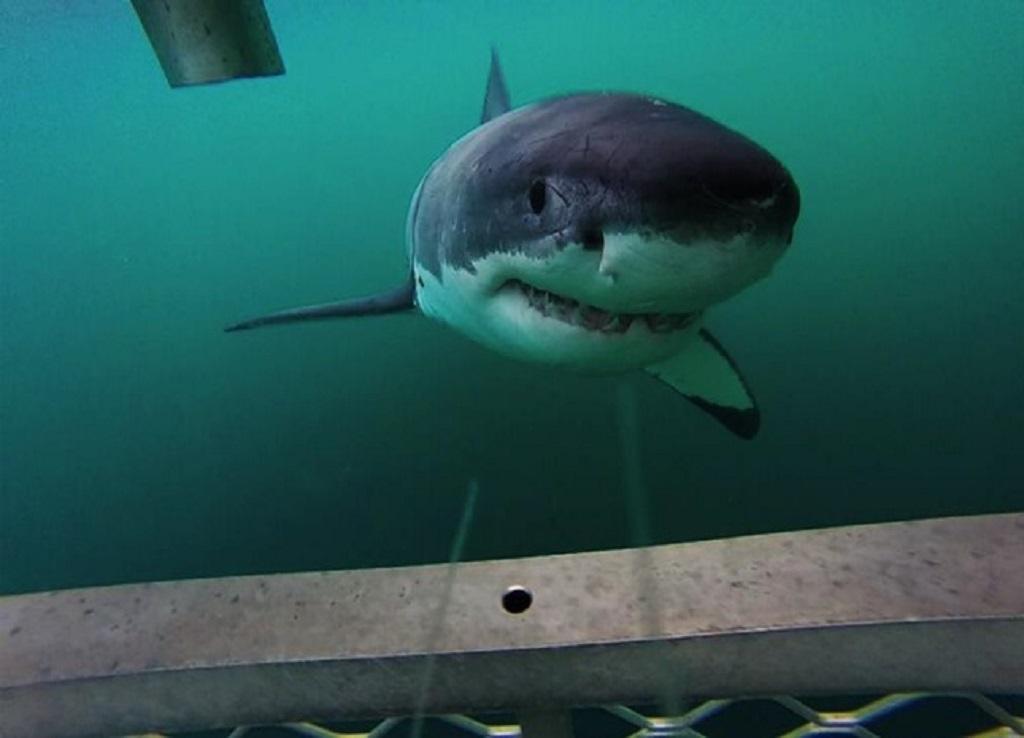 There is a personality of white sharks beyond the ‘antagonist’ beast they're portrayed as in films, and that is what marine anthropologist and researcher of applied psychology attempts to establish in his book Iridescent Skin. The socially intelligent marine animals have been traversing the seas of the planet for about 400 million years but are currently a ‘vulnerable’ species with need of conservation. This intimate account looks at the human-white shark relationship through cage-diving in New Zealand, and brings out traits of the fish that are rarely associated with it. The author’s perception survey of tourists before and after their interaction with the sharks sheds light on how cage-diving can help in conservation efforts. Excerpts from the book:

Cage diving can play a significant part in the demystification of the sharks, by potentially positively effecting tourist attitude towards the sharks, through providing an opportunity for them to see sharks alive in their natural environment (even if the paradigms of the encounter are created). To address this question, I used interviews and surveys.

First, statistically I evaluated if there was any significant difference in tourist attitude towards white sharks before and after the encounter (among 300 participants: 150 tourists and 150 from general population). Some researchers found, direct encounters gave the participants a new perspective towards the animal, was significant in altering the negative attitude, and increased their show of interest in the conservation efforts.

And even if participants already had a somewhat strong positive attitude towards marine environment and it’s inhabitants before the shark encounter, they seemed more interested in sharks and their conservation after cage diving tours, which increased the chance of a future call for action for shark- conservation (Apps, Dimmock, Lloyd, and Huveneers, 2016; Apps, Dimmock, and Huveneers, 2018; Cerullo and Rotman, 2000; Dobson, 2007; O’Bryhim, 2011). My findings are in similar lines with these previous findings.

I found that there were more of male cage diving participants as compared to females. There was a significant correlation between dive certification and a positive attitude towards white sharks; however, it was not the same with neutral and negative attitude. Interestingly, in this research group, there was no significant correlation found between one’s level of education and their attitude towards white sharks, which may be indicative that education by itself does not help demystify any animal like sharks, or build stronger positive attitude towards their natural environment; rather, it might be more related to experience and the individual. Hence, maybe it is important to rethink the mode of education and focus on more practical experience for students to inculcate a more positive attitude towards the animals, instead of basing merely on given information to try to bring about positive change in the conservation of nature.

There was the contrasting idea of how the shark will behave, often as opposed to the media presentation of them as hyper aggressive. People found them to be more curious than aggressive, ‘I thought they would be biting at everything, aggressive, because you see that in all the discovery shows. But I actually found them to be somewhat timid, and curious.’ Often the conflict resolution brought self-realization,’ said Emma, an American woman, ‘I felt free and calm. It was completely opposite to what I would have imagined. I think, I had built up this irrational, illogical understanding, or fear of what they are, and what they will do to you, and this was a great end to it.’

For some though, the experience had somewhat of a mixed effect on their attitude towards white sharks, ‘I’m still intimidated by them. They’ve had so many scratches on them, so many battle scars. I don’t think I’ll feel any better in the water after seeing them, and their size. They were not aggressive, but you won’t catch me jumping in these waters now.’ And for a couple of people I interviewed, they seemed to be more scared about the sharks after the experience than before. ‘If I wasn’t scared before, I am now, because I know how big they are…shit no!’ There is one more notable factor, I was able to talk to 2–3 tourists who came to the boat as observers from the surface, and they did not have an altered perspective of the animal; could it be that it is imperative to actually get in the water with the sharks to appreciate them, and just watching them from the surface is not enough? It is something that can be explored in future research.

While for some tourists, seeing the shark was an adrenaline-filled experience, for others, it was more of a spiritual experience. Sonny, the only Indian cage diver I met on the boat, said, ‘When it moves in front of you, it’s almost like a spirit moving, and not an animal. It was like an aura, and energy moving in front of you, and you don’t see the shark as the shark. That’s pure strength, it gave me goose bumps, when you think of people meditating—not to think, you’re not feeling anything, and trying to grasp that energy in front of you.’ There was a Canadian ex-fighter pilot who said, ‘I wanted to see if there was any connection, and yes, there certainly was. I did not feel any aggression, it was a recognition, that we are all equals, I was in human form, and he was in marine form, but we are all equals.’ On a personal level, I think I fell in love with this man; after his career as a fighter pilot, he spent the rest of his career as a commercial pilot. I asked him, ‘Sir, you flew all your life, you were in New York in the morning and Tokyo in the evening—what is the thing, if any, you found similar in all the places?’ ‘The smiles… When I came out of the cockpit, the smiles were same everywhere.’

So, it does seem that cage diving is beneficial to the divers, often providing an opportunity of self-realization, and also taking photographic images for themselves and to share with friends and family. Notably, for most of the people, the experience of cage diving and the white shark encounter facilitated through it create a positive attitude towards the sharks (significant for their conservation efforts), and there is a substantial difference in attitude towards them before and after the encounter. Most found it to be a ‘peaceful encounter’, and the shark to be ‘calm’ and non-aggressive, unlike as promoted in media. However, we still need to ask about the perceived ‘naturalness’ of the encounter. When people are indeed talking of a peaceful encounter with a white shark underwater, I am not personally convinced that the paradigms of how these encounters are produced are truly ‘natural’.

Yes, meeting white sharks underwater is extremely rare, and some people do have encounters with them when the sharks are ‘peaceful’, and the reality may stand that most of the time, pointers may pass by us undetected, because they are not interested in us or not willing to engage with us. But if a white shark is willing and interested to engage with us underwater without the incentive of any other olfactory or visual stimulus, will they not come up to have a close look at us? Even if the shark is calm, and goes for let’s say an inquiry bite at us, can an untrained human handle such enquiry, and reciprocate with equal calmness? I am not convinced!

What is significant to note is that these findings are highly indicative that the diving experiences have a significant effect on positive alteration of human attitude towards the white sharks, which is essential in supporting white shark conservation efforts.