Is India headed towards a locust plague

Exceptional summer breeding may prompt swarms to remain in the country through end of year, move east & south

The Food and Agriculture Organization says a locust plague can be declared only when widespread and heavy infestations occur in one or more years. Photo: Vikas Choudhary / CSE

The global upsurge of locusts is on the brink of becoming a plague, aided by unusually favourable weather for three years and the international community’s failure to curb their growth.

Swarms of locusts took Delhi and the National Capital Region by suprise on June 27, 2020, the first time since the locust plague of 1926-31, according to some estimates.

After spreading to Bihar, the insects have started mayhem in Nepal. By July 2, locusts spread to almost a dozen districts in the Himalayan country where the kharif crop cycle is underway.

Locusts have damaged transplanted paddy, maize, fodder grass and vegetables, according to Plant Quarantine and Pesticide Management Center in Nepal’s Lalitpur. Severe damage has been reported from Dang and Pyuthan districts.

While some swarms have stayed in the Kathmandu valley, some have headed further north towards Ramechaap.

In the past, locusts have invaded Nepal on rare occasions and only during plagues.

The Food and Agriculture Organization (FAO closely monitors the spread of locusts and plays a crucial role in its control operations. It said in a 2014 document that in Southwest Asia, locusts are normally present in southeast Iran and southwest Pakistan during the spring and along the Indo-Pakistan border during the summer.

“During plagues, locust swarms often migrate further north and east than usual ... and occasionally invade countries on the southern edge of the former Soviet Union as well as Nepal and Bangladesh,” the document, The FAO Commission for Controlling the Desert Locust in South-West Asia, said.

“This [latest] spread is due to the southwesterly monsoon winds as well as the two days of strong southerly winds over Uttar Pradesh that carried desert locust groups to the northern districts and a few crossed into Nepal lowlands and scattered,” Keith Cressman, senior locust forecasting officer of FAO, said.

Earlier, between the last week of May and early June, when swarms of locusts unusually spread to states as far as Chhattisgarh in the east and Maharashtra in the south, FAO had linked it to the strong northwesterly winds established in the aftermath of the super cyclone Amphan.

Locust officers of India, who are working overtime to chase and destroy the insects, say the widespread invasion this year is also because of the sheer number of the swarms crossing over to India.

Despite control operations in spring-breeding areas, Cressman admitted that the swarms were the result of higher than normal levels of breeding this past spring in Pakistan and Iran. “They will breed in the summer until about October / November in Rajasthan,” he added.

But most locusts have already matured since their arrival as hopper bands or immature adults in India in April. Till mid-June, breeding was underway in Bikaner, Nagaur, Barmer and Jodhpur districts. They are now being joined by spring-bred swarms from Iran and southwest Pakistan.

Over the next four weeks, India should remain on high alert as swarms developed in Somalia will cross the Arabian Sea. They will reach Gujarat and Rajasthan from early July onwards, according to FAO’s June 27 update on desert locusts. These are second-generation swarms that have developed in the Horn of Africa, despite aggressive control operations.

In the past, such spectacular migrations have occurred during upsurge and plague periods. For example, immature swarms crossed the Atlantic Ocean from West Africa to the Caribbean in October 1988, covering a distance 5,000 kilometres in 10 days.

Swarms migrated from West Africa to the British Isles in 1955. From time to time, they have crossed: 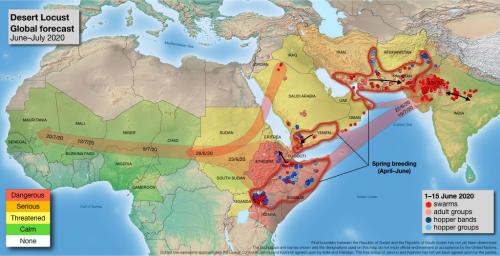 FAO describes the current spread of infestation as an “upsurge” and says a plague is declared only when widespread and heavy infestations occur in one or more years. But this too does not seem far off.

Usually, the summer-bred swarms or the monsoon swarms start returning to their spring breeding areas in Iran and southwest Pakistan by September and October. But this year, their migration may not be unidirectional.

In years of exceptional breedings, according to the 2014 FAO document, monsoon swarms may move from the source areas eastwards over northern India from September onwards.

Between 1950 and 1961, monsoon swarms on several occasions moved east to reach western Uttar Pradesh and Madhya Pradesh and south to reach Gujarat, Mumbai in Maharashtra and Kerala in the months of October, November and December. These years coincide with the plague years of 1949-1955 and 1959-1962.

Some entemologists fear that this year, locusts might breed in areas outside their traditional territory of the Scheduled Desert Area. Locusts prefer sandy and sandy-loam soil for laying eggs and thrive in areas that are warm, roughly 25-40°C, have ample rainfall and green vegetation.

With the monsoon rains sweeping across all the five states — Rajasthan, Haryana, Madhya Pradesh, Uttar Pradesh and Bihar — that currently have locust presence according to FAO, they might breed in pockets where the soil is just right and undisturbed. For example, agriculture officers acknowledge that the Delhi Ridge area and the banks of the Ganga have soil that is suitable for locusts to lay eggs.

When conditions are less favourable, locusts take up to six months to mature. But given the right conditions, they can breed every three months and increase 20-fold in a single generation and about 400 times in six months after two generations of breeding. 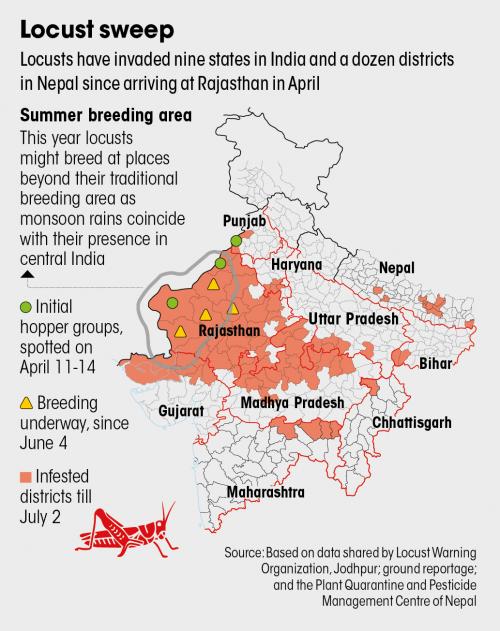 This will have a disastrous impact at a time when farmers are about to begin sowing of kharif crops. While locusts only nibble away the leaves of mature trees, they can gobble up entire saplings in a single morning, leaving no trace of vegetation.

The alarming situation has prompted the Indian government for the first time to deploy a dozen drones and a helicopter for locust control in the districts of Jaisalmer, Barmer, Jodhpur, Bikaner and Nagaur in Rajasthan.

It has also sanctioned Rs 14 crore to Rajasthan and Rs 180 crore to Gujarat for the preparation. Officials at the Locust Control Office, Palanpur, in Gujarat say they have stocked up sufficient insecticides and are prepared with vehicle-mounted spraying machines for all evntualities.