The Special Task Force (STF), a specialised wing of the Odisha Police, seized a leopard skin and two elephant tusks from two persons at Gania-Chamundi Road on the banks of the Mahanadi river in Nayagarh district April 24, 2021.

Ramesh Pratihari of Chakragada in Cuttack and Bimbadhar Tarei of Bethia Sahi in Nayagarh districts were arrested under Sections 379, 411 and 120 (B) of the Indian Penal Code and 51 of Wildlife (Protection) Act, 1972.

They were planning to strike a deal with another smuggler when the STF team caught them, he added.

The leopard skin was five feet four inches long and two feet seven inches wide at the centre. Similarly, the elephant tusks were two feet two inches long, 6.5 inches wide and 1,310 kg and 1,305 kg in weight respectively. The parts will be sent to the Wildlife Institute of India, Dehradun, for chemical tests, Pankaj said.

Investigation was on to unearth details about the poaching of the animals and the destination of the parts. The STF team will also find out if any other persons were involved in the poaching as well as trafficking, Pankaj added. 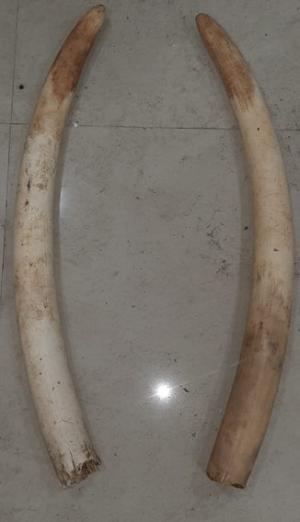 The leopard skin was the second such seizure by the STF in the month of April this year. The STF had April 2 arrested two poachers from Bolagada in Khurda district. A leopard skin had been seized from them.

Down to Earth had April 5 reported the seizure of 20 leopard skins by the Odisha forest department and the STF from 10 districts in one year. The STF seized 12 leopard skins and forest personnel seized eight between May 20, 2020 and April 2, 2021.

The STF has seized as many as 13 leopard skins, nine elephant tusks, two deer skins, three live pangolins and around five kilo of pangolin scales in the last one year from different districts as part of a special drive against poaching and trafficking. As many as 15 cases have been registered during the period and 27 persons, allegedly involved in the cases, have been arrested, Pankaj said.