Wild animals are increasingly moving out of protected areas. What should the government do to ensure their safety? 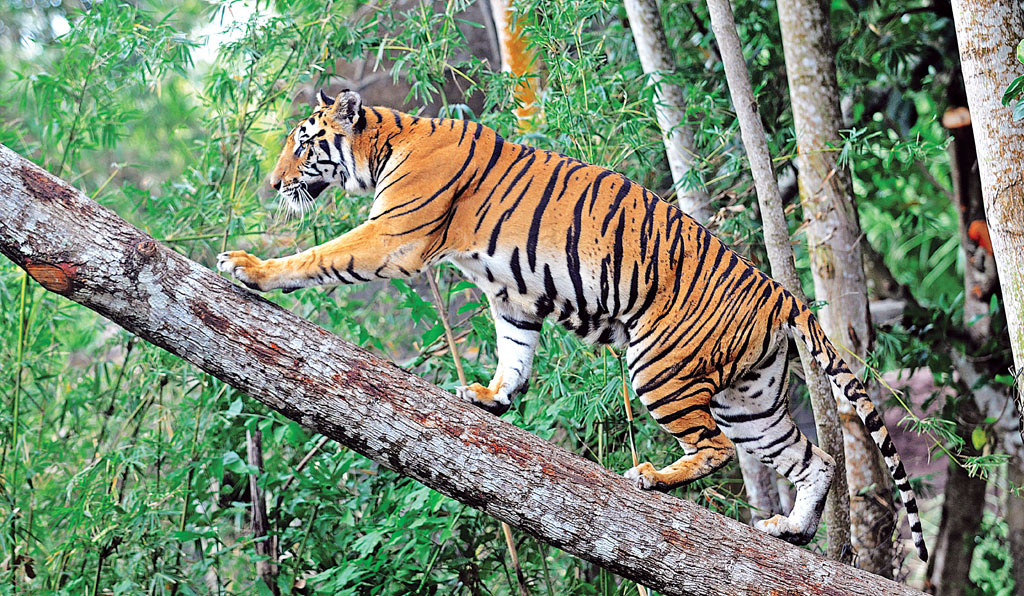 Despite being accorded the highest level of protection under the Wildlife Protection Act, 1972, wild animals, such as the tiger, are under threat if they venture out of the protected areas (Photo: Thinkstockphotos)

Kamal and Mohan Singh Rawat lost Rs 30,000 in one night. A herd of wild elephants entered their farms in Rampur village in Uttarakhand and ravaged the paddy crop that was ready for harvest. This is not the first time they have lost their crops to wild elephants. “I had no income last year too as elephants had damaged my crops,” rues Kamal Singh. Rampur falls in the Lansdowne Forest Division and is part of the elephant corridor between Rajaji and Corbett tiger reserves.

Residents of Teda village in neighbouring Nainital district are agitating against the tigers entering their village. The animal has not only killed livestock but also mauled to death two women in October. 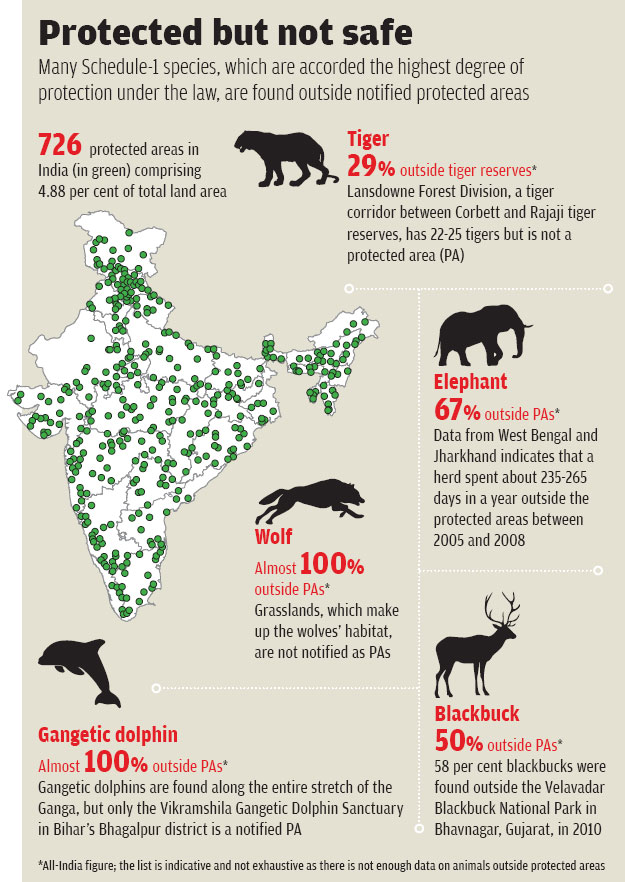 The statistics are grim for other species too. According to a 2010 census of the Velavadar Blackbuck National Park (BNP) in Bhavnagar, Gujarat, 58 per cent of the blackbucks were reportedly found outside the national park. Forest departments in various states do not count the nilgais, wild boars and macaques outside the protected areas.

Marine turtles, on the other hand, do not even have a protected area where it is most needed. “The Olive Ridley sea turtle is accorded protection under Schedule-I of the Wildlife (Protection) Act. But one of its largest mass nesting sites on the banks of the Rushikulya river in Odisha is not a notified protected area. We are talking of about 200,000 turtles nesting here every year,” says Bivash Pandav, a scientist who specialises in marine turtle conservation.

This does not mean India lacks in protected areas. As of October 2015, the country has 726 protected zones, including 103 national parks, 531 animal reserves, 26 community reserves and 66 conservation reserves, covering 4.88 per cent of the total area of the country. But is this enough to protect the vast wildlife population in our country? Does declaring an area “protected” guarantee the protection of all the species residing within or does it only save a few keynote species listed under Schedule-I.

Too small a habitat

In India, the very idea of a protected area appears skewed. “The protected areas were historically meant to be the breeding grounds for animals raised in the wild for the purpose of hunting,” says S S Bist, emeritus scientist at WII. This space is not enough to have a full-fledged habitat for wild animals, he adds.

In most cases, protected areas are marked in a haphazard manner, leaving out routes that animals use regularly for movement. A case in point is the Landsdowne Forest Division. It is the tiger corridor between Corbett and Rajaji tiger reserves and is touted to have more than twice the number of tigers at the Rajaji National Park. However, it is not classified as a wildlife division but a territorial division, which leaves it strapped for funds. While NTCA allocated Rs 5.8 crore to Corbett for 2015-16, it allotted only Rs 2 crore annually to the Lansdowne Forest Division. “A wildlife division is less prone to human-animal conflict as it has fewer human settlements, but it is not the case with a territorial division. While the tiger reserves have as many as three to four guards per beat, which can range from five to 20 km, we have only one guard per beat,” says N M Tripathi, Lansdowne divisional forest officer.

Aquatic species are not safe either. The Gangetic dolphin is the national aquatic animal of India and is found throughout the course of the Ganga. But only a 50-km stretch of the river, from Sultanganj to Kahalgaon in Bihar, is designated as a protected area, called the Vikramshila Gangetic Dolphin Sanctuary. “This means the Gangetic dolphin can be poached anywhere else along the banks. While we do not have a proper survey yet, going by estimates, this species is fewer in number than the tigers,” points out Qamar Qureshi who specialises in conservation biology and plans to conduct a dolphin census with a scientific approach.

Once an animal is out of its “safe” habitat, it becomes vulnerable to poaching. “Of the 4,000-odd blackbucks, over 3,000 are found in the 100 sq km area outside the park. We have had many cases in the past where blackbucks were captured by poachers hiding in villages, who sometimes set bait,” says a senior official at BNP, requesting anonymity.

Many animals are also overlooked while demarcating protected areas. The wolf is increasingly losing its habitat as it does not find a place in the protected areas. “Wolves thrive on grasslands, which are either human-dominated or considered wasteland and often diverted for commercial use,” points out Bilal Habib, a scientist who is conducting the first-of-its-kind wolf census in Maharashtra.

Lack of food in protected areas

The condition of the existing protected areas is not very good, either. Wildlife experts claim that territorial animals do not have enough space within reserves and their prey do not have enough fodder to thrive on. This is forcing the wild animals to move out and venture close to human habitation in search of food. Many of these animals are accorded high protection under the Wildlife (Protection) Act, 1972. According to the National Institute of Disaster Management, the annual loss of farm produce due to intrusion of wild animals in Himachal Pradesh alone is worth Rs 500 crore.

Krithi K Karanth, associate conservation scientist at the Wildlife Conservation Society, Bengaluru, surveyed 1,972 house-holds in Karnataka in 2013. The survey shows that 91 per cent of the total crop damage in the state was due to wild animals. This, experts note, is because of deficient fodder in protected areas.

“Increasing levels of non-palatable plants in forests lure herbivores to the villages on the fringe. It is but natural that animals ravage crops for food,” says P Aravindan, a wildlife biologist in Coimbatore. “We cannot say that elephants are destroying crops if we infringe on their territory. If we do so, we must be prepared to face the consequences,” he adds.

What needs to be considered by the wildlife authorities while taking steps to protect an animal is the fact that one cannot restrict the movement of animals and birds to stipulated areas. Moreover, a protected area, say for tigers or elephants, will have other wildlife too which need to be equally protected.

His concern is echoed by Bist. “The animals have corridors and we cannot control their movement. They cannot be confined to ‘notified’ areas as they need to be constantly on the move. The protection needs to extend beyond the notified protected areas,” he says.

According to Karanth, safeguarding wild animals will require an understanding of their movement and species distribution beyond human-made boundaries, along with suitable conservation measures.

Conservationists, therefore, call for an inclusive approach to save the country’s wildlife. “We need to understand that all animals, fish, birds and reptiles need an equal degree of protection, especially outside the protected areas. The focus must be evenly distributed irrespective of whether a forest is a tiger reserve or not,” Bist says.