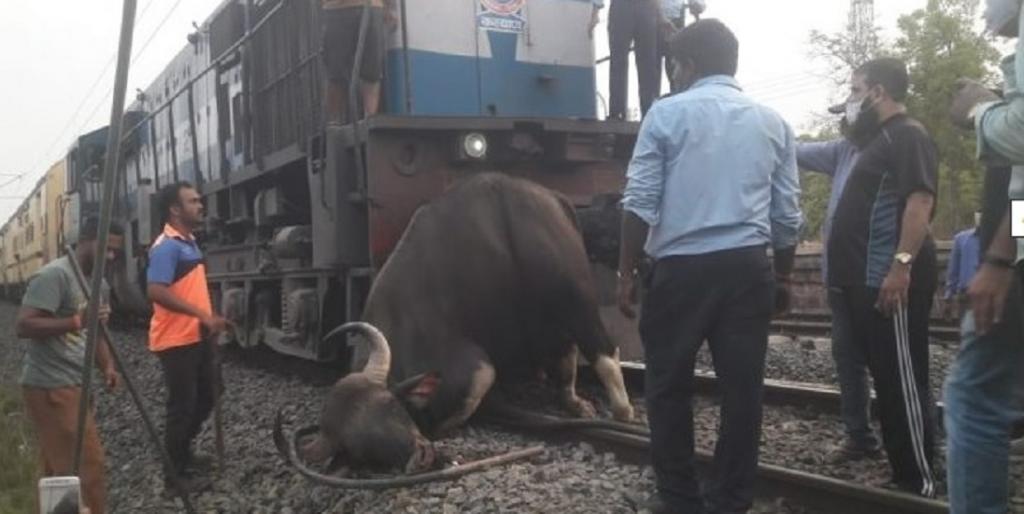 On April 11, 2021, a male Gaur died after being hit by the CSMT-Mangalore Express in Sindhudurg, in the Maharashtra section of the Western Ghats. The MoEF&CC has now cleared a similar rail project in the Ghats spread across Goa and Karnataka, imperilling its wildlife. Photo: Akshay Mandavkar @akshay_journo / Twitter

A project to double a railway track in the Western Ghats was cleared by the Standing Committee of the National Board for Wildlife (NBWL) on January 5, 2021, despite warnings against it by government-appointed experts.

A committee appointed by the Union Ministry of Environment, Forest and Climate Change (MoEF&CC) raised concerns about clearing the project in one of ‘the last remaining wildernesses’ in the Western Ghats. The Ghats are one of the world’s eight ‘hottest hotspots’ of biological diversity.

The committee was appointed to clear the projects in Protected Areas (PAs) of Goa and Karnataka. PAs include national parks, wildlife sanctuaries, conservation and community reserves.

Documents assessed by Down to Earth (DTE) have revealed the desperation of for clearing projects in PAs including this one.

DTE tried to speak to the officials concerned on the reasons the project was approved but did not get a response.

The project in question is the doubling of the track of the the Hospet-Hubballi-Londa-Vasco Da Gama railway line by the Rail Vikas Nigam Ltd (RVNL). The project, sanctioned by the Union Ministry of Railways in 2010-11, involves doubling of the 353-kilometre-long railway track in Karnataka and Goa passing through the Western Ghats.

The project is divided into two phases with Phase I covering 252 km between Hospet and Tinaighat and Phase II covering the Tinaighat-Vasco stretch.

Phase I of the project is being funded by the Asian Development Bank (ADB) with Rs 2,127 crore. There is no forest diversion for this part of the project.

The Phase II stretch is divided into two parts by the RVNL as separate forest land diversion proposals:

According to the ADB’s Technical Assistance Consultant’s Report from March 2009, the doubling is being done to improve the handling capacity of the track for carrying iron, iron ore and steel to Mormugao Port for export and carrying back imported coal.

“The present section provides an important link between the Ballary-Hospet areas which is one of the largest iron ore producing belts in the country to Mormugao port. Further, the doubling will ease the traffic congestion at Hubbali junction due to goods traffic,” ADB’s initial environmental examination report of the project dated March 2011, says.

The project was recommended by the Karnataka State Board for Wildlife on September 26, 2019 to the NBWL — the central regulator for the diversion of forest land inside PAs.

The recommendation was conditioned on the adoption of mitigation measures to reduce the impact of the project on the biodiversity.

Under the Wildlife (Protection) Act, 1972, any diversion of forest land inside a tiger reserve or areas linking one PA to another, requires the approval of the NBWL based on the advice of the National Tiger Conservation Authority (NTCA).

So, when the NBWL considered the project July 3, 2020, it asked the NTCA to do the site appraisal and submit its report within 15 days.

On the same day, through an office memorandum, Nishant Verma, deputy inspector general of forests (NTCA), formed a committee constituting:

The committee visited the area July 10 and submitted its report July 21. The report was signed by Garawad.

The forest area of Castlerock range of the Kali Tiger Reserve holds a sizeable population of tigers. It is an important tiger corridor in the central Western Ghats, connecting the tiger habitats in Karnataka, Goa and southern Maharashtra… the minimum number of tigers recorded during the tiger monitoring exercise conducted in May 2020 in areas adjoining the Tinaighat-Castlerock-Caranzol line is eight.

Given the ecological importance of the area and the fact that the presence of the NH-4A widening project being undertaken by the National Highway Authority of India (NHAI) was just 5-6 km away from the railway line, the report said the project had a potential to “damage the integrity of the last remaining wilderness of the Western Ghats.”

Based on these factors, the report gave a set of four recommendations:

The Garawad report was sent to the ministry by Nishant Verma July 22. The office memorandum between NTCA and MoEF&CC regarding this, along with the file notations on the memorandum were accessed by DTE.

Interestingly, the memorandum included only one recommendation — prescribe structural and non-structural mitigation measures by WII. The three other recommendations were left out.

The NBWL was also informed of this single recommendation, as is evident from the board’s minutes of meeting held October 5, 2020.

“The NTCA… while recommending the proposal, has desired that a detailed study for prescribing mitigation measures in the terrain might be conducted by the Wildlife Institute of India,” the minutes noted.

When contacted, Verma said he was not with the NTCA anymore and would respond later. (This story will be updated as and when that happens). Dasgupta did not respond to DTE.

A source in the ministry said:

There is no proper justification for the project, especially given the ecological importance of the area. For example, the railway project says that the track doubling is needed because a lot of development has happened in the area and the traffic is increasing, but NHAI, which was a project barely 5-6 kilometres from the railway line, says that the widening of NH-4A is needed because no development has happened in the region in the absence of a road.

Concerns have also been raised on the Goa portion of the project and the way it got clearances.

The project’s proposal for forest diversion of the part within Goa was divided into two parts — Castlerock to Kullem and Kullem to Madgaon. The project was recommended by the NBWL December 17, 2019. But this was done without consulting the NTCA as mandated under the Wildlife (Protection) Act, 1972.

“It is important to note that although the proposed railway alignment passes through the Bhagwan Mahaveer Sanctuary and Goa falls in Western Ghats Tiger Landscape, the NBWL did not refer the project to NTCA for its advice, which is in the clear violation of Section 38 (O) (1) (g) of the Wildlife (Protection) Act, 1972,” Giridhar Kulkarni, a Karnataka-based wildlife conservationist, said.

Interestingly, MoEF&CC’s own regional office in Bengaluru, while considering the proposals for forest diversion outside PAs (not wildlife clearance), made the observation that these separate projects should be processed in entirety for a comprehensive assessment of the forest land diversion and its consequences.

The Goa-based environmental non-profit, the Goa Foundation had approached the Bombay High Court in July 2020, challenging the clearances given to the projects inside the wildlife sanctuary.