Monarch butterflies face risk of extinction due to habitat loss

The number of monarch butterflies in hibernation colonies of Mexico has reached a 20-year low, says report 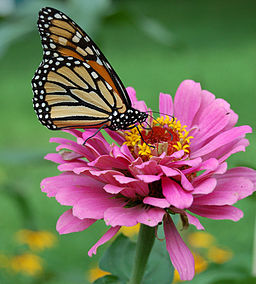 According to the latest survey of the core area of the Monarch Butterfly Biosphere Reserve in Mexico for 2014-15, Monarch Butterflies are facing a phase of habitat and food loss which is likely to lead to their extinction.

The survey, undertaken by the Institute of Biology of the National Autonomous University of Mexico and the World Wildlife Fund-Telcel Alliance, states that over 21 hectares of the butterflies’ hibernation site has been degraded by deforestation and drought.

The report states, "There are three primary threats to the monarch butterfly in its range in North America: deforestation and degradation of forest by illegal logging of overwintering sites in México; widespread reduction of breading habitat in the United States due to land-use changes and the decrease of this butterfly's main larval food plant (common milkweed) associated with the use of glyphosate herbicide to kill weeds growing in genetically engineered, herbicide-resistant crops; and periodic extreme weather conditions throughout its range during the year, such as severe cold or cold summer or winter temperatures."

The report adds, "These threats combined are responsible for the dramatic decline over the last decade in the number of monarch butterflies in the hibernation colonies in México, which reached a 20-year low."

In December 2013, research by the same team had shown that there had been a 43.7 per cent decrease in the total amount of forestland which is the hibernation site for these butterflies in and around Mexico’s Monarch Butterfly Biosphere Reserve.

According to the US Fish and Wildlife Service statistic in February, nearly a billion butterflies have vanished since 1990 as farmers and homeowners sprayed herbicides on milkweed.

Experts say that the reason is non-participation of locals in conservation activities. "For years most of the local communities in the core zone of the Monarch Butterfly Biosphere Reserve have shown their commitment to conserve their forests by participating in the Monarch Fund, reducing deforestation to almost zero in 2011. Unfortunately over the last three years, illegal logging has been documented in the same community of San Felipe of Los Alzati," said Omar Vidal, director general of the World Wildlife Fund in Mexico.

Every year, as many as 60 million to one billion Monarch Butterflies travel more than 2,500 miles from eastern Canada to the forests of western central Mexico. The butterflies spend the winter hibernation clustered in small areas of the Reserva de la Biosfera Mariposa Monarca (Monarch Butterfly Biosphere Reserve), a national protected area and nature preserve.