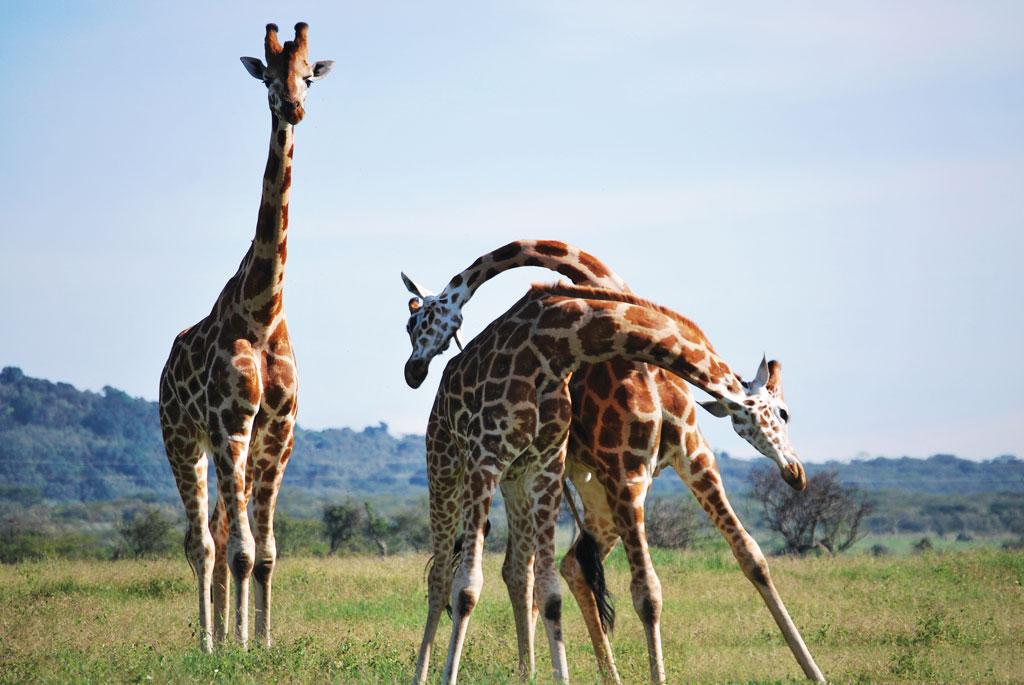 Less than 1,000 Rothschild giraffes are left in the wild (Photo: Zoe Muller)

When conservation scientist Zoe Muller embarked on her research on giraffes in east Africa’s savannah bushlands, one of her objectives was to gain deeper understanding of the social behaviour of the iconic animals that once roamed Africa in hundreds of thousands. But one day as she tracked the animals deep inside Kenya’s Soysambu conservancy, she stumbled upon a dead Rothschild giraffe calf (Giraffa camelopardalis rothschildi) surrounded by besides her mother, a group of obviously distressed adult females, circling around apparently inspecting the unfortunate creature.

While Zoe may never know what might have killed the calf, over the next five days, she witnessed what she thought was the first- ever observation of never-before documented giraffe behaviour. “The mother stayed with the dead calf’s body for five days, and in that time I never saw her eat or drink. She was watching over her calf, even though it had died,” says Zoe, who is a doctoral fellow and researcher with the Giraffe Research & Conservation Trust (GRCT), a Rothschild giraffe conservation project. Months of study later led Zoe to conclude that unlike previously believed, giraffes could be living in structured, complex and organised family units, very much like elephants and other African mammals.

She hopes that this knowledge and the more information she has gathered over time will be critical in devising strategies to save the tallest mammal species on the planet. Their numbers have taken a dangerous plunge over the years without attracting as much attention as other equally threatened African mammals such as lions, rhinos and elephants.

If numbers are anything to go by, less than 1,000 individuals are left in the wild scattered across the acacia woodlands of Kenya’s central rift valley and in Uganda’s Murchison Falls National Park, where another conservation group, the Giraffe Conservation Foundation, is studying the animals. The Rothschild features in the International Union for Conservation of Nature’s (IUCN) red list.

Overall, giraffe numbers have been tumbling dangerously over the past 15 years. Various studies in 2014 indicated giraffe population to have plummeted by up to 40 per cent in the last 15 years in Africa— from a healthy population of 140,000 in 1999 to less than 80,000 in 2014. 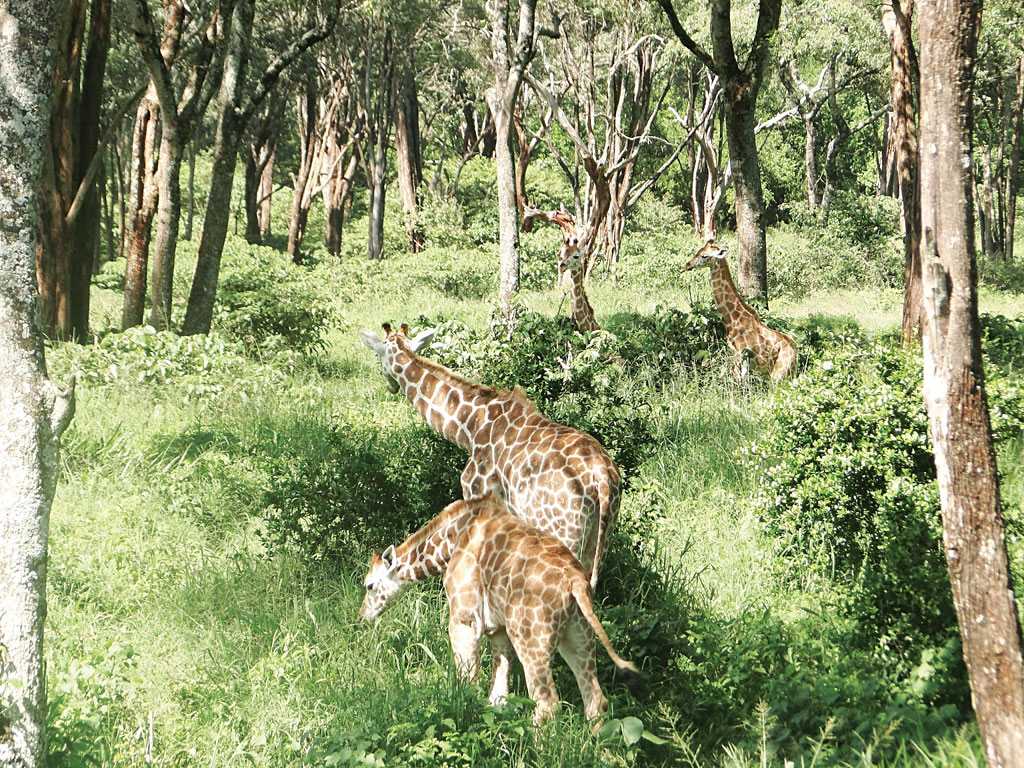 “To effectively conserve a species in the wild we need to know about its behaviour and social organisation. Studies on other species like elephants have shown moving family units are more successful for translocation than moving individuals randomly,” Zoe says. “It is this knowledge of a species’ social behaviour that allows us to create successful conservation interventions. In-depth knowledge of social behaviour is incredibly important to develop targeted, specific and effective conservation plans,” she adds.

Of the nine giraffe species documented in Africa, the West African Giraffe (Giraffa camelopardalis ssp G C peralta) is nearly extinct, with only 200 individuals left. The beautiful light brown and white Rothschild, distinguished from her cousins by lack of spots on her lower knees, is so endangered that if no action is taken it could as well follow the path of the West African Giraffe, which is very close to extinction.

The biggest threat to the species, scientists agree, is loss of habitat, poaching and a growing human population. Moreover, outbreaks of diseases, such as the anthrax epidemic in Kenya in 2011, have also taken a toll on the iconic herbivores. “In Kenya, all known wild populations of the Rothschild giraffe are threatened by agricultural development, and remaining populations are confined to national parks, private properties, and other protected areas,” says Titus Kaitho, a veterinary specialist with the Kenya Wildlife Service (KWS). “The remaining populations are physically isolated from one another, making it impossible for them to interbreed. Their population has been further affected as a result of the closure of conservation areas, which have reached or exceeded their carrying capacities,” he adds.

So why is the Rothschild particularly hard hit? According to Sam Weru, a wildlife and conservation consultant, the species prefer living in habitats that are also suitable for agriculture. “In Kenya for example, 70 per cent of wildlife lives outside protected areas. When ranches (a type of farm) are subdivided, the Rothschild loses its habitat, unlike their relatives such as the Masai giraffe, which has a relatively wider range. The Rothschild is more choosy and survives mainly on juicy cactus leaves. “Naturally, when animals feel they are threatened, they automatically suppress their breeding capacity—it is like they ask themselves why should we breed when you do not want us to live? It’s an instinctive behaviour,” adds Weru, who is also an environmental law doctoral student at the University of Nairobi.

Shrinking habitat aside, Weru concedes that not all giraffes live in families reducing the chances of a male meeting a female during the oestrous period (a regularly occurring period of sexual receptivity among most female mammals) reducing their chances of reproduction. “The 15-month gestation period for the animals is a factor as well,” he points out.

Though the Rothschild is in dire straits, with even scientists predicting a gloomy picture, the question remains as to why there is so little awareness on their plight internationally, when compared to equally threatened mammals such as rhinos or elephants. Weru’s guess is that giraffes are not seen as a “sexy” species among scientific circles, thus there is a lack of widespread awareness or campaigns to save them.

On the other hand, KWS, the body responsible to protect Kenya’s wildlife, does not have a specific policy dedicated to giraffes, but rather a common one that takes care of species conservation and protection.

Some initiatives though are providing a ray of hope to save the tallest mammal. Near the Nairobi National Park, Jock, a two-yearold male, is feeding on greenish-coloured pellets placed on a gazebo-like raised platform at the African Fund for Endangered Wildlife’s Giraffe Centre, a breeding and education awareness facility. Jock is one of the eight Rothschild residents on this 48-hectare sanctuary. He will soon be introduced into the wild. Sanctuary manager Christine Nyang’aya laments that while a lot of studies have gone into distribution of animals, not much research has gone into areas such as reproduction, breeding, genetics of the species and loss of habitat.

The author is a science journalist based in Nairobi