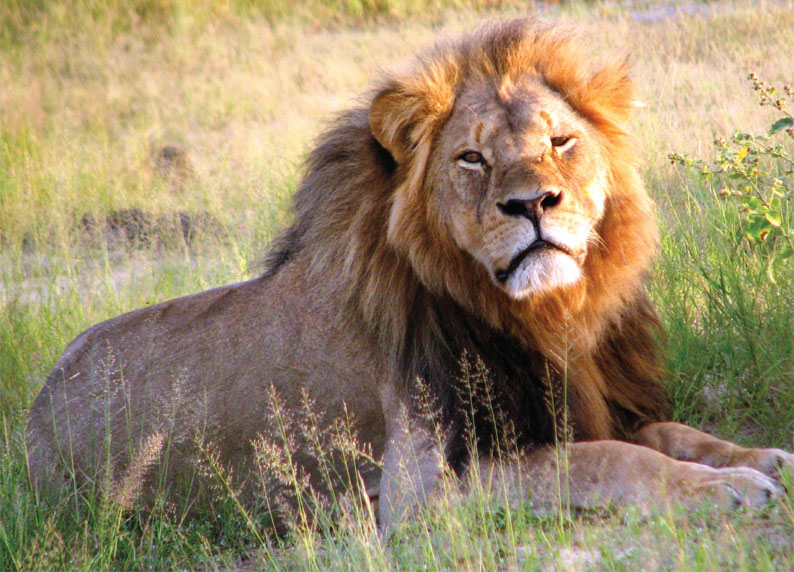 Africa is a heaven for wildlife. And hunters too. The death of Cecil the lion (pictured above) in Zimbabwe in July 2015 reignited the global debate on the trade of wildlife trophies. Cecil lived in Hwange National Park before he was killed by Walter Palmer, an American dentist who paid US$55,000 for the hunt. A global outcry against the incident and the practice ensued. Many airlines prohibited carrying animal trophies in flights. Conservationists urged the US government to ban the import of hunting trophies.

It is notable that the population of African lions has declined across the continent, mostly because of habitat loss and conflict with humans. The continent has less than 30,000 lions— a decline of more than 50 per cent since 1980. Much of this decline is due to poaching, though trophy hunting too has had a significant role.

Globally, illegal trade of wildlife is estimated to be worth $19 billion per year, and is rising at an alarming rate. The legal trade too is a humungous $300 billion a year. The US and Europe have about 18 million “big game” hunters (people who indulge in hunting big fauna).

According to the Convention on International Trade in Endangered Species of Wild Fauna and Flora (CITES), between 1981 and 2012, three-quarters of all lion trophy exports were sent to only five countries—France, Germany, South Africa, Spain and the US. In the past five years, 21 million wildlife specimens legally entered the US along with an additional 13 million kilogramme of specimens such as caviar. In the past five years, the US government approved import of nearly 60,000 trophies of species that face the risk of extinction.

Recreational trophy hunting drives a multi-million dollar industry. The money is used for conservation and to provide livelihood to local communities. Hunting advocates insist that trophy hunting can create incentives for conservation. However, given the widespread illegal hunting across the globe, the activity has received criticism. Changes in reproductive pattern of species, reduction in genetic diversity and adverse impact on ecosystem are some of the negative aspects associated with hunting. In fact, many countries such as Kenya, Botswana and Zambia have already banned trophy hunting. The industry is expanding in southern Africa and Tanzania but is static or declining in Central and West Africa. According to Transparency International, money from hunting fuels corruption in countries such as Zimbabwe, Zambia and Tanzania, which allow hunting in dangerously high numbers. 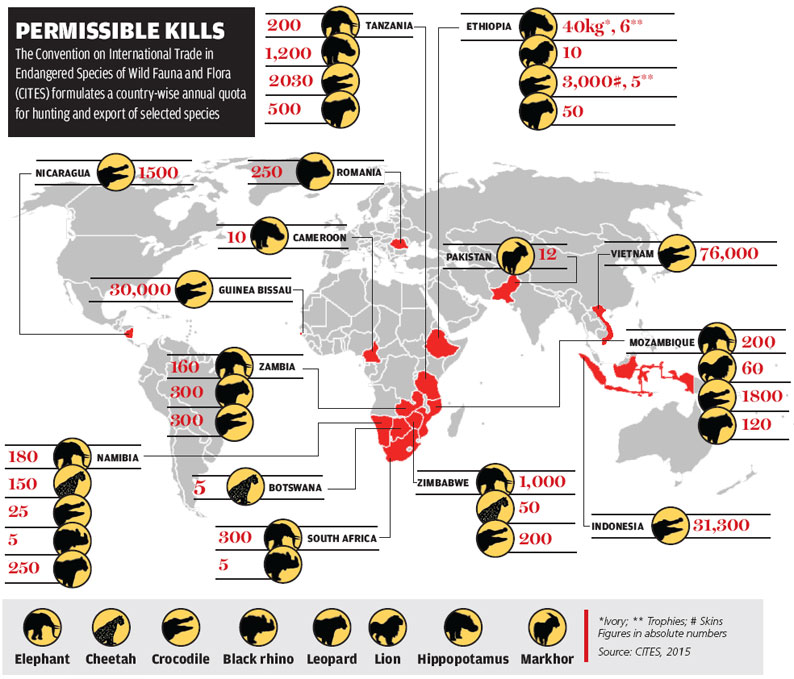 CITES recommends that trade in hunting trophies be allowed only with permits and all the concerned parties must ensure that the practice is not detrimental to the survival of species. CITES also publishes hunting quotas for some selected species. CITES, Food and Agriculture Organization (FAO) and World Trade Organization (WTO) say that hunting, if done scientifically and sustainably, can actually support conservation. The success of initiatives such as Markhor (Capra falconeri) hunting in Pakistan and Tajikistan supports this argument.

Hunting has a legacy in India and we have a richly documented hunting tradition. But this legacy has come at a very heavy price. The activity has caused large-scale destruction of wildlife resources, including extinction of many species. Post-Independence, hunting was banned by the government under the Wildlife (Protection) Act, 1972, except for specified purposes such as for self-defence, to prevent crop damage, to counter vermin species and for scientific or educational reasons.

Hunting for sport is prohibited in India. However, international trade in exotic species has been allowed as per the provisions of Foreign trade (Development and Regulation) Act, 1992, and the EXIM (export-import) policy of India. One might wonder what’s wrong with Indians going abroad, hunting exotic animals and bringing trophies? The answer to this question is intriguing. While it provides a few benefits to African countries, it also opens up a channel for illegal trade in Indian wildlife, especially in cases wherein lookalike Indian species are exported under the garb of African species (see ‘Indian and African species that look alike’). 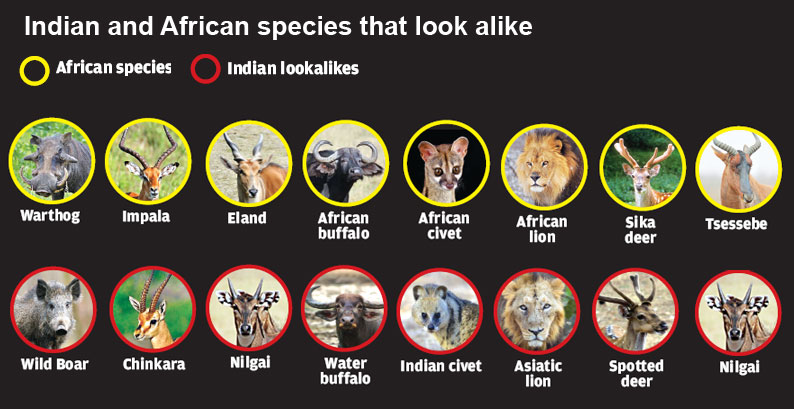 Being ecological brothers separated in the Triassic age (250-200 million years ago) from the Gondwana supercontinent, India and Africa have huge similarities in their fauna and flora. Many species, such as leopards, lions and elephants look similar. These similarities are much more if we look at the body parts of these animals (for instance, the skull or the skin) and not the entire animal. A flourishing legal trade in trophies may actually end up promoting illegal trade. India is already facing huge pressure on its wildlife, with species such as tigers, lions, elephants, rhinoceros, leopards and snakes being in high demand in the international market.

In fact, the Ministry of Environment, Forest and Climate Change (MoEF&CC) has been receiving applications from the public for granting permits to import trophies from the African countries such as South Africa, Cameroon, Namibia and Zimbabwe. MoEF&CC sources say that before 2010, the ministry was receiving only a few applications, but the numbers have increased. Till February 2015, the total number of application received by the ministry for import of animal trophies was about 250.

These species are hunted in Africa by Indian hunting enthusiasts and imported into India in the form of full animal mounts, shoulder mounts, skulls, skins, horns, scrotum, feet and hooves. Taking a stand, MoEF&CC took a policy decision on the issue in February 2014 and prohibited import of trophy articles made of species listed in Appendix I of CITES or lookalikes of any species protected under the Wild Life (Protection) Act, 1972. It also restricted the number of import of such articles to 20 per person per year. Given the difficulties in distinguishing species that look alike, implementation of the law remains a challenge. And monitoring authorities are highly understaffed.

Imported wildlife trophies are checked at ports by inspectors of Wildlife Crime Control Bureau (WCCB), the designated nodal agency for CITES-related enforcement in India, or are sent to regional offices by customs officials for further examination. If no violations are found, a no objection certificate is issued. But if a violation is detected, further action is taken. The mechanism seems to be good, but with the limited capacity of WCCB and the huge quantum of international trade, the challenge is huge. This is the reason MoEF&CC has been contemplating strengthening WCCB.

Trophy hunting not a conservation tool

Trophy hunting may be an important tool in wildlife conservation in some countries, but it is not conservation in itself, particularly in the context of India. Though many hotels, government institutions and private houses continue to display wildlife trophies in the form of mounted animal heads, stuffed animals, horns and ivory tusks, we must try to discourage the practice in consonance with our wildlife conservation ethics. This is necessary for the longterm benefit of Indian and global wildlife resources.