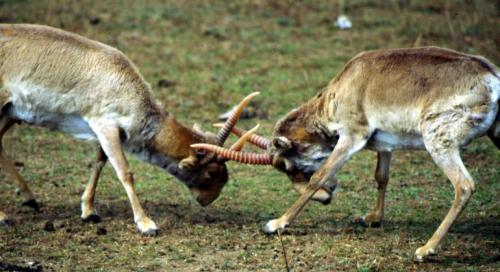 The government of Kazakhstan has announced that the numbers of Saiga, a critically-endangered antelope species found on the steppes of the country have registered a rise after an epidemic in May last year killed off much of the population.

The saiga (Saiga Tatarica) is only found in one location in Russia (in The Republic of Kalmykia) and three areas in Kazakhstan (the Ural, Ustiurt and Betpak-Dala populations).

In May 2015, a catastrophic and unprecedented mass die-off caused by a bacterial infection wiped out more than 200,000 saiga within a few weeks. The Betpak-Dala saiga population in central Kazakhstan lost almost 90 per cent of its animals, which is equivalent to over 60 per cent of the global population, leaving the species in a critical situation.

However, on June 20, the Kazakh Ministry of Agriculture published the results of an aerial census, which was conducted in April 2016. The census data shows an increase of saiga numbers in all three populations within Kazakhstan, according to a press-release by the government.

“In total, 36,200 adult saigas were counted in the Betpak Dala region in Central Kazakhstan during the April 2016 census. This is far below the 242,000 animals we counted in spring 2015, before the mass die off. But we are grateful for this glimpse of hope,” the press-release quoted Albert Salemgareyev from the Association for the Conservation of Biodiversity of Kazakhstan (ACBK) as saying. The ACBK co-led the census as part of the Altyn Dala Conservation Initiative (ADCI), which works on behalf of a group of national and international organisations and the government of Kazakhstan.

The two other remaining populations within Kazakhstan also show some signs of hope. One population in the European part of Kazakhstan, west of the Ural River (the Ural population) seems to have recovered fully from a mass die-off in 2010 and is now the largest population with more than 70,000 animals, according to this year’s census.

The press release noted that the Ustyurt population in Western Kazakhstan remained the most vulnerable of the saiga populations. Poaching had brought it to the brink of extinction, but new data from the 2016 count revealed that a small but significant number of males survived, which allows further reproduction. The population has not declined any further. Nevertheless saiga numbers are still at a dramatically low level with less than 2,000 animals being counted.

“The news about recovering saiga populations in Kazakhstan is a sign of hope after the catastrophic mass saiga die-off event in 2015," said Bradnee Chambers, Executive Secretary of the Convention on Migratory Species (CMS). "At the same time, poaching remains a serious threat to the species and we need to be aware of the fact that mass die-offs such as the one which shocked the world in 2015 can occur again and that we have still not fully understood the underlying causes of the mass die-off," said Chambers.

Saiga face a lot of threats. The horns of the males are valued in traditional Chinese medicine. Males and females are also hunted for their meat and skin (which is used to make suede). Since the dissolution of the erstwhile Soviet Union, their habitat has been fragmented into five countries namely, Russia, Kazakhstan, Turkmenistan, Uzbekistan and Mongolia. Many human-made barriers including border fences pose hurdles to traditional migration routes used for finding new pastures.

The Memorandum of Understanding concerning Conservation, Restoration and Sustainable Use of the Saiga Antelope (Saiga MOU) under the auspices of CMS is the only international instrument for the conservation of this critically endangered species.  Since 2006, CMS regularly brings together all 5 Range states of saiga as well as partner organisations and other stakeholders to agree on conservation measures and coordinate their implementation.