Half the global snake bite deaths happen in India. Why are we not prepared?

WHO now recognises snakebite as a neglected disease. But India, which has the highest number of snakebite deaths, is woefully ill-prepared in tackling the problem 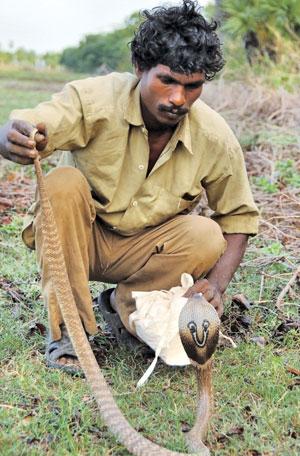 ON JUNE 9, the World Health Organization (WHO) included snakebite into the list of “Neglected Tropical Diseases” (NTDs) —a diverse group of tropical infections affecting poor communities in Africa, Asia and the Americas. Activists hope the decision will bring attention to snakebite, so far neglected by pharma firms and policy makers. “This is an opportunity to finally get serious about tackling snakebite,” says Julien Potet, policy advisor on NTDs for Médecins Sans Frontières’s Access Campaign.

The decision is the culmination of an eight-year-long process. WHO estimates that snakebites kill 100,000 people every year globally. But in stark contrast to “big” diseases like HIV/AIDS, diabetes and cancer, it has never received better treatment and research funding. British medical journal, The Lancet noted in a July editorial that WHO had tried to rectify this by including snakebite in its 2009 NTD list. However, it was excluded later without any reason.

In the last week of March this year, at the 10th Meeting of the WHO Strategic and Technical Advisory Group for Neglected Tropical Diseases held in Geneva, officials noted that not only death, snakebite also caused serious injury, namely necrosis or tissue death due to envenoming, the injection of venom into the blood stream. Both deaths and injuries like limb amputation following necrosis overwhelmingly affected agricultural workers, who are among the world’s poorest people. The experts recommended snakebite’s inclusion into the NTD list again to aid its prevention.

The decision will impact India as it accounts for half the global deaths due to snakebites as per WHO estimates. “It will build pressure on the government to consider solutions to the problem,” says Allwin Jesudasan, coordinator for the Snakebite Mitigation Project at the Madras Crocodile Bank’s Centre for Herpetology. The country seems woefully underprepared to deal with it. The reasons are several.

Foremost is the problem of inaccurate data. Right now, there is no official system which can give an exact figure of snakebite casualties every year. The government itself is unsure about the numbers (see "Huge gaps"). Responding to a query in the Lok Sabha in March, 2015, Union Minister for Health and Family Welfare J P Nadda said that around 1,123 people had died in 2013 due to snakebite while 1,008 had died in 2014. In sharp contrast, a study published by experts, including noted herpetologist Romulus Whitaker, in the PLOS Neglected Tropical Disease journal in 2011 has estimated that deaths due to snakebite could be between 45,900 to 50,900 in India every year. “It might be even higher, around 100,000,” says P Gowri Shankar, founder director of the Kalinga Centre for Rainforest Ecology in Karnataka’s Agumbe, who focuses primarily on studying King Cobras.

The data on injuries—read necrosis—due to envenoming is similarly sketchy. Says Shankar, “It could be as high as 300,000-400,000. Permanent injuries due to snake-bite impact not just the victim but the whole family.” 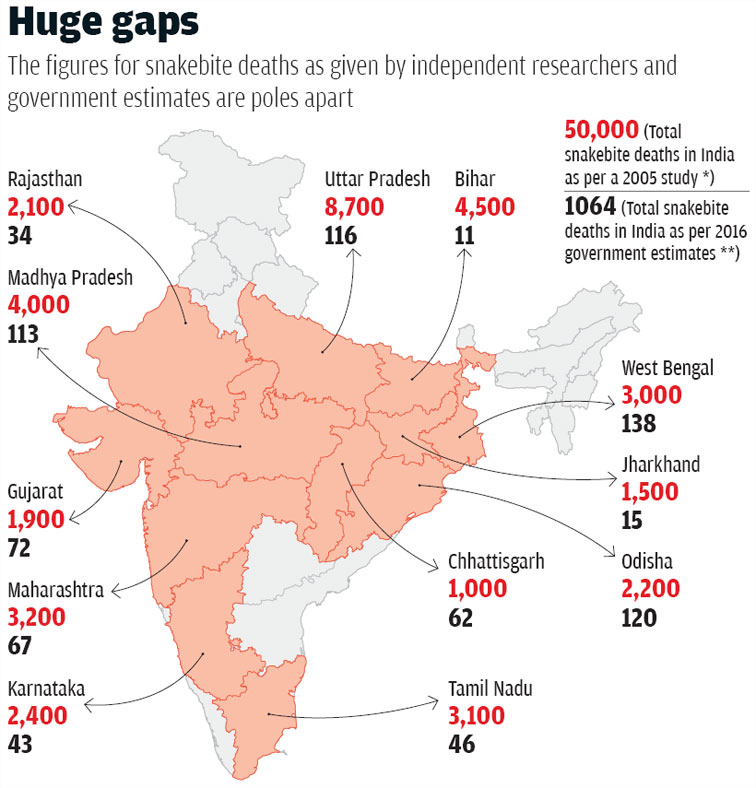 But the most important cause of India’s runaway snakebite death rate is lack of antivenom. Y K Gupta, Head, Department of Pharmacology and Chief, National Poisons Information Centre at the All India Institute of Medical Sciences, New Delhi highlights that there are various logistical, marketing and economic issues with the production and supply of antivenom. “Currently, there is only one organisation—the Chennai-based Irula Snake Catchers’ Industrial Cooperative Society which extracts venom from the so-called “Big Four” species of snakes—the Indian Cobra, Common Krait, Saw-Scaled Viper and Russell’s Viper. These cause 98 per cent of snakebite deaths in India. They then sell it to biotech firms that manufacture anti-venom for the entire country,” says Shankar.

That is where the trouble starts. “There are reports about companies diluting anti-venom to make more money. For instance, instead of making one vial, the firms will make four by dilution. Thus, patients who need 10 vials of antivenom, may have to take 40 for the same result,” informs Shankar.

Snake venom is of different types: neurotoxic (toxic to the nervous system), haemotoxic (toxic to red blood cells), cytotoxic (toxic to cells) or myotoxic (toxic to muscles). “In India, out of 216 snake species, 60 are poisonous,” writes Gupta in a paper published in the Journal of Clinical Toxicology in 2014. “It would make more sense to use a mixture of various venom types while making antivenom,” he writes. “There should be proper research to understand an area’s snake species. Every state government should establish a venomextracting centre keeping the local species in mind,” advises Shankar.

And what of antivenom availability? “Mostly, there are no cold storages at Primary Health Centres (PHCs). Patients, mostly poor, rural farmers, have to rush to tertiary centres. Transportation and sub-sequent treatment are very costly. The few PHCs that do store antivenom don’t receive patients,” points out Shankar.

“WHO’S decision will encourage more funding and more researchers will show interest in the subject,” says Jesudasan. A recent report published by Hyderabad-based market research firm Market Data Forecast says the global antivenom market is projected to reach $1,493 million by 2021 from $1,109 million in 2016, at a Compound Annual Growth Rate of 6.12 per cent from 2016 to 2021.

People can play their part. “The government had made a snakebite protocol in 2014. But it is not followed routinely. Awareness is the key,” says Yogesh Jain of Chhattisgarh-based Jan Swasthya Sahyog.