Sighting of desert cat termed ‘rare’ by MP is not rare after all, say independent wildlife experts

Sighting of the cat in jungles in not unusual, claim experts with ‘photographic evidence‘ captured as recently as 2018 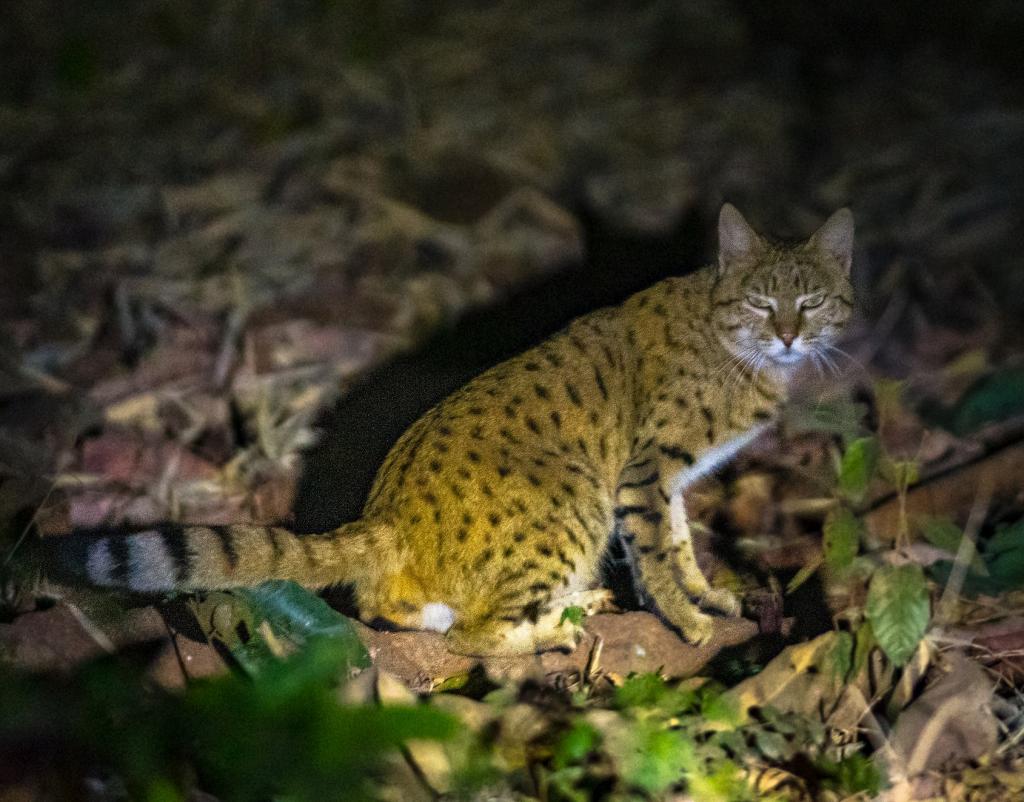 The Indian desert cat was photographed by a tourist during a night safari December 14, 2021. Photo: Rupesh Kukade

The Indian Desert Cat was catapulted into the spotlight since it was spotted at the Akola buffer zone of the Panna Tiger Reserve in Madhya Pradesh during a night safari on December 14.

Panna Tiger Reserve (PTR), while sharing the news on the microblogging platform Twitter, said it was spotted only four times in the past between 1999 and 2006 in the Thar desert.

1/n
After long time our Guest have captured Indian Desert cat at Akola Buffer of Panna Tiger Reserve during their nigh safari. pic.twitter.com/nDIdX5NizN

The species is mentioned in the official list of animals found in the reserve but hasn’t been sighted or captured in camera traps recently, PTR Field Director Uttam Sharma told Down To Earth. “So, this latest photo-evidence is a big thing even for us.”

The fact that the desert cat was found in a jungle has surprised many wildlife enthusiasts but the sighting may not be as rare as it has been made out to be, especially in the arid regions, said Yadvendradev Jhala, Dean and Scientist ‘G’ at Wildlife Institute of India (WII).

He added that he has photographic evidence of the cat being spotted in PTR in 2018. “It has also been spotted several times in other areas of central and western India.”

There were 541 sightings of the cat in 2018-19 alone, according to Status of Leopards, Co-predators and Megaherbivore-2018 compiled by Jhala.

The species is highly adaptable and can be found in forests as well as arid and semi-arid regions, he said.

It preys on small rodents and reptiles and is mostly a nocturnal creature, the expert added.

The presence of Indian jungle cats in jungles may be the reason why the desert cats are mostly spotted in Rajasthan and Thar desert in India. But it doesn’t mean it cannot live in dense jungles. It has also been sighted in Sariska Tiger Reserve of Rajasthan.

The field director of the reserve said that the photos taken by WII have not been shared with him and neither have they published a paper on the same. "They are working in PTR. If they have photos, they should have shared with us."

The Indian Desert Cat has not been reported in the management plan of PTR 2002-03 to 2011-12, the director added. "Someone has to authenticate the photograph. Until they share the photos with us, we cannot comment on it as it is not in our records."

The species has a sandy-brown fur and small, round spots covering the upper part of its body. The cat has a long, slender and tapering tail with a black tip and spots at its base, according to the Status of Leopards, Co-predators and Megaherbivore in India 2018.

The animal is in the ‘Least Concern’ category of the International Union for Conservation of Nature Red List of Threatened Species.

Chief minister of Madhya Pradesh Shivraj Singh Chauhan also tweeted December 2021 that "news of an Indian Desert Cat being spotted for the first time in the state's #PannaTigerReserve is encouraging."

News of an Indian Desert Cat being spotted for the first time in State's #PannaTigerReserve is encouraging.

It indemnifies our Government's efforts in protection of wildlife and forests. We are committed to conserve rich biological diversity and flora & fauna of Madhya Pradesh. https://t.co/rpW8ncqAS9

The movement of herbivores as well as carnivores have increased in the area since restriction on human activities were implemented in 2013, he added.

Felis silvestris (Indian desert cat) has pug marks similar to that of wild cats. So, neither the PRT nor the Nauradehi WS team could ascertain its population.

“We need to have direct evidence like sightings or footage on camera traps to keep a record of the population,” said Yadav.

IFS Gobind Sagar Bharadwaj, who authored the book Tracking Tigers in Ranthambhore, has spotted the Asiatic Wild Cat 26 times in his life. The species was more frequent in Rajasthan and parts of Gujarat in the past, he said based on anecdotal evidence.

“I have spotted it 18 times in the Desert National Park, Jaiselmer, thrice in Sariska Tiger Reserve, twice in Tal Chappar Blackbuck Sanctuary, once in Barmer, once in Gujarat and saw a dead body in Jodhpur,” the expert added.

Sightings have become less frequent now because of road accidents and shrinking of habitat, he added.