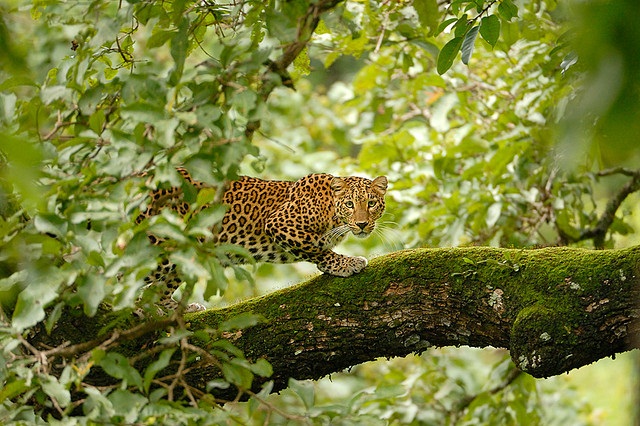 A first-ever regional assessment of leopard population in Karnataka’s human habitats has been carried out by the Wildlife Conservation Society (WCS) and the Center for Wildlife Studies.

“The study highlights the fact that resurgence of large carnivores in human landscapes—thanks to increasing human acceptance—now needs to be buttressed by management actions based on research that generates knowledge about their ecology,” Ullas Karanth, director of WCS India said.

The study, Spotted in the News: Using Media Reports to Examine Leopard Distribution, Depredation, and Management Practices Outside Protected Areas in Southern India, was published recently in PLOS ONE, an international scientific journal.

The study uses newspaper reports to provide an insight into the ecology of leopards in human habitats. It covers over 200 cases of human-leopard conflicts in over a 100 sub-districts of Karnataka for over a year.

The authors collected reports after covering a 14-month study period (March 2013 to April 2014). By using an advanced statistical method known as occupancy modelling, they were able to map indicators like leopard distribution patterns and hotspots for showing conflicts with humans and livestock.

“During the study period, 245 cases of human-leopard conflicts in Karnataka’s 175 sub-districts were reported. There were 32 instances of attacks on humans, including three mortalities, and the capture and translocation of 56 leopards (91 per cent of them were in response to attacks on livestock or based on sightings) were also documented,” the report says.

The authors noted that some translocations appeared to disregard the government’s guidelines on human-leopard conflict management issued in 2011.

“Alarmingly, leopard translocations were found to be associated with increased probabilities of attacks on livestock and humans,” the report adds.

The results of the study indicated that leopards were distributed over 84,000 square km of area in Karnataka outside the designated national parks and wildlife sanctuaries.

“Presence of free-ranging dogs, cover, rocky escarpments and irrigated crop fields emerged as the environmental factors most likely to influence leopard presence. The correlation between livestock density to leopard presence was not (that) strong,” the authors say.

Contrary to the popular notion that leopards in human-dominated areas are “straying animals”, the study recorded 19 reports of cubs born in agricultural fields, indicating the presence of breeding resident females. Also, poaching and road-kills account for the highest number of leopard mortalities in the region.

Based on these findings, the authors suggest a shift in management approach from reactive conflict redressal involving capture and translocation to proactive community-based interventions that ensure safety of people and livestock.

They also recommend prompt and fair compensation for losses caused by leopards to prevent retaliations and awareness drives to enhance people’s understanding and acceptance of these adaptable cats in human landscapes.