Bhagalpur’s riverine plains have led the fight to conserve Greater Adjutant Storks; Now, the birds are being tagged to study their movements 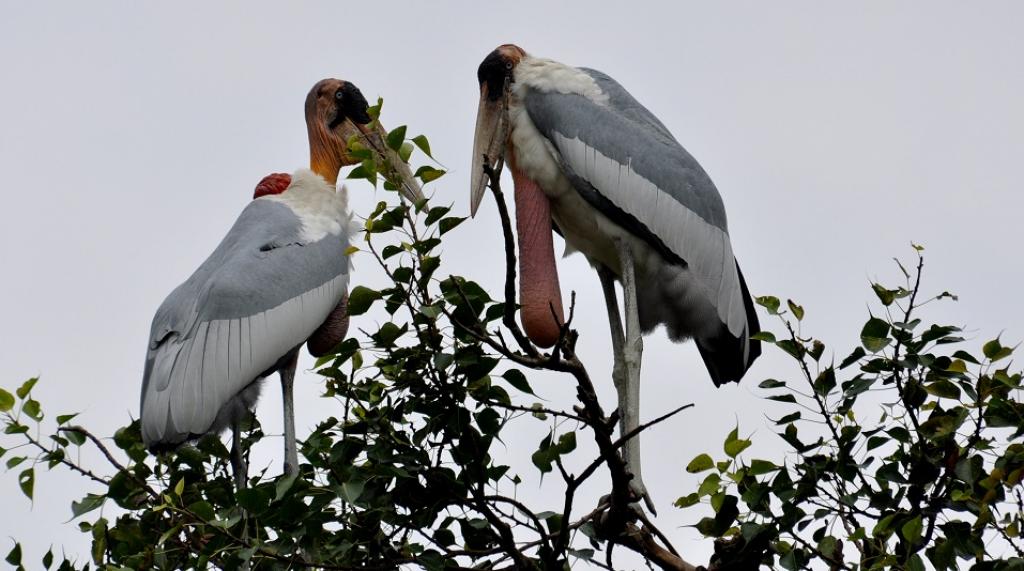 In a first, Bihar has decided to tag endangered greater adjutant storks (Leptoptilos dubius), locally known as ‘Garuda’, with GPS trackers to monitor their movement as a part of efforts to conserve them, officials have said.

Bhagalpur’s Kadwa Diara floodplains area is the third-most popular breeding centre for the greater adjutant stork in the world after Assam and Cambodia.

In recent years, several surveys have found that their population has been slowly increasing, thanks to conservation efforts.

Bhagalpur District Forest Officer Bharat Chintapalli said there was a plan to tag greater adjutant storks with a GPS tracker to monitor their movement for conservation.

“We will start tagging greater adjutants with GPS trackers in the next two to three months. It will help in keeping track of their movements,” he said.

Chintapalli said the project to tag greater adjutants with GPS trackers was delayed due to the second wave of the novel coronavirus disease (COVID-19) pandemic, followed by the lockdown.

He said the non-profit Bombay Natural History Society will help and work along with the state forest, environment and climate change department to start the process of tagging greater adjutant storks with GPS tracker.

“The state government has provided a fund of Rs 53 lakh for this purpose,” he said.

According to a senior forest officer in Patna, the government agency has been approaching private businessmen of Japan and South Korea for supplying the ring type GPS tracker.

Initially, only four birds — including two healthy and two undergoing treatment at rehabilitation centre — will be tagged with GPS tracker on an experimental basis. More birds will be tagged early next year.

Arvind Mishra, a Bihar-based bird expert, said tagging greater adjutants with GPS trackers will help in studying their movement and places where they go to.

“Do they move from Kadwa Diara to other places in Bihar or outside the state to Assam? All such doubts will be cleared by monitoring their movement through GPS trackers,” he noted.

Mishra was the first person to spot the greater adjutant stork nesting and breeding in 2006-07 in Kadwa Diara. He also motivated the government’s agencies and different communities in sleepy villages to work for the migratory bird’s conservation.

The greater adjutant is one of the most threatened stork species of the world and is widely considered to be a rare bird.

In the last 14 years, with active support and involvement of the local community, its population has increased to nearly 700 in 2021, from 78 in 2007. It is a big jump, Mishra, who is also state coordinator of Indian Bird Conservation Network, said.

Mishra said the state government had extended full support to the conservation of the greater adjutant. A rescue and rehabilitation centre had been set up at Sundarban in Bhagalpur.

It was a unique and till now, the only such initiative in the country taken by the government. A temporary rescue provision had also been set up in the breeding zone for administering first aid to injured birds. When rescued birds recover, they are released in their natural habitat.

However, the global population of the Greater Adjutant Stork is estimated to be roughly not more than 1,500 now. Greater adjutants numbered only 650-800 individuals in 2006 according to data from global organisation Wetlands International in 2006).

This has been possible due to its increasing population mainly in Kadwa Diara in Bihar in the last few years according to a research paper presented by Mishra on behalf of his own organisation, Mandar Nature Club (MNC).

The paper was presented in the Convention on the Conservation of Migratory Species, Conference of Parties (CMS COP 13) at Gandhinagar, Gujarat in February 2020.

The greater adjutant stork is classified as ‘endangered ‘on the IUCN’s Red List 2004 of threatened species and listed under Schedule IV of the Indian Wild Life (Protection) Act, 1972.