The pain of truncated lives 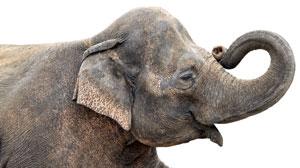 In the wild, elephants can live up to 70 years. However, captive elephants have a different story to tell—one of torture, cruelty and neglect. Between January 2016 and December 2016, 28 captive elephants died in Kerala alone. None of them were 70 when they died—one elephant was not even two years old, while three were between the ages of 10 and 20. These figures are alarming, but the situation may be much worse since we are aware of only a limited number of cases.

Captive elephants are used for performing in a number of activities—religious ceremonies, parades, circuses and tourism. They are tied for most of the day; they do not get a chance to socialise with other animals; and, are fed the same diet every day. As a result, they suffer from anxiety and depression. They are beaten to perform and spend the rest of their time tied up, often on concrete floors with two of their legs restrained by heavy metal chains. Among the methods used to tame wild elephants is the use of the cruel “belt trap”, which is a thick metal chain embedded with nails. The trap is placed around the legs of the animal, forcing it to limit its movements as excessive movement would cause severe pain. Another tool used is the ankush—a sharp metal object used to poke the elephants in their sensitive spots like the trunk and mouth.

The wildlife authorities seem to have misunderstood their mandate. Rather than conserving and protecting animals, they have become agents to promote their sale. Worse, they remain oblivious to their pain. Take the case of Evoor Kannan, a 25-year-old tusker owned by the Travancore Devaswom Board (TDB). Unable to withstand the severe beating of its mahout, the elephant retaliated and the mahout died. As a punishment, the TDB left the elephant unattended in the temple backyard. The story of Siva Sundaram, an elephant owned by the famous Rajarajeswara temple is no less heartbreaking. The elephant was tied for so long that the chain had got embedded into its hind legs. Or take the case of a 72-year-old elephant, Guruvayur Padamanabhan, which was forced to stand on three legs as part of a ritual to pay homage to Lord Guruvaurappa. These instances have been documented by V K Venkitachalam, secretary of the Heritage Animal Task Force, a Thrissur-based non-profit.

As breeding elephants in captivity is rare and difficult, elephant calves are illegally trapped and sold. “Every year at least 100 elephants from the Northeast, especially Assam, are sold at Bihar’s Sonepur Fair—a huge live animal market,” explains Gauri Maulekhi of the Kerala Elephant Task Force. But given that elephants are wild animals, should private ownership be permitted at all? Trapping an elephant from the wild amounts to “hunting”, which is an offence under Section 9 of the Wild Life Protection Act, 1972.

Moreover, the permission granted for transferring ownership is another area that needs revision. To keep an elephant, one requires an ownership certificate under Section 42 of the Act and a declaration of this ownership has to have been made within 180 days, as per the Wildlife Stock Declaration Rules, 2003. But owners simply do not declare or possess ownership certificates and the local forest department does not keep a vigilant eye on such matters.

In an attempt to stop illegal trade, alleviate the cruel conditions of captive elephants and push state governments to set up rescue centres, the Wildlife Rescue and Rehabilitation Centre (WRRC) filed a case in the Supreme Court. The Supreme Court has passed various orders directing that no cruelty shall be meted out to captive elephants and that the chief wildlife warden must ascertain the number of elephants and determine if they have ownership certificates. A state-led investigation found 289 elephants that either did not have ownership certificates or were not declared. In a majority of the cases where ownership documents were found, the elephant was found to be in the custody of a person who was not the one with the ownership documents. In a number of cases where the ownership certificate was provided by the chief wildlife warden, it was found that the corresponding declarations were missing. The investigation exposed a huge trade nexus.

The investigation also found that in a short span of five months, 89 elephants from Kerala had gone missing. An RTI response received from the state in May 2015 revealed that there were 684 captive elephants in Kerala. However, at a meeting held by the State Level Task Force on October 9, 2015, the Chief Wildlife Warden submitted that there were 599 elephants in captivity.

The culture of owning elephants needs to be reversed. Not just temples, tour operators and circuses, even celebrities are known to possess elephants or ivory tusks. In October 2016, the Muvattupuzha Vigilance Court found that actor Mohanlal was in possession of 13 pairs of ivory tusks. The case was later withdrawn.

A writ petition filed by the WRRC will be finally heard by the Supreme Court in July. Conservationists and activists are hoping the apex court will ban the selling, exchanging, leasing, renting and gifting of elephants. They want the seizure of elephants without ownership certificates. They are also campaigning for the setting up of rescue centres in states and to make state governments accountable. As Suparna Ganguly of the WRRC puts it aptly, “Elephants are an extremely sensitive and intelligent species, much like humans. They should be shielded from the kind of abuse that we are witnessing today in the name of religion, tourism, entertainment and culture. We must fight against the fragmentation of their habitats, which is leading to increasing human-elephant conflicts.”

(The author is an advocate and legal adviser to People for Animals, a Delhi-based non-profit)