Maximum concentration of birds found on route of proposed ropeway which will destroy birds, says environmentalist 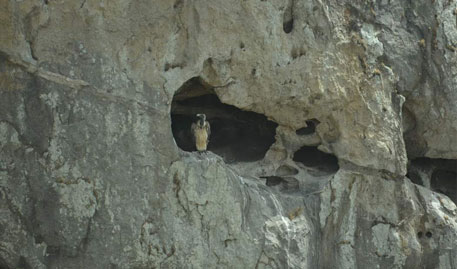 There is finally some good news for those worried by declining vulture population in the country. A recent vulture census conducted jointly by the Gujarat forest department and non-profit GEER Foundation has shown a significant increase in vulture population at Girnar hills in Junagadh district of Gujarat. The bird is listed in schedule 1 of the Wildlife Protection Act; the schedule accords highest protection to animals and birds listed under it.

Vulture census in Gujarat is conducted every two years and their population was found to have almost doubled during the census conducted on May 26 and 27. “We recorded the presence of 131 vultures, including 16 young ones, and 85 nests during,” says Dinesh Goswami, founder of Prakruti Nature Centre, a Junagadh-based non-profit. The species recorded during the census include the Indian long-billed vulture, white-backed vulture and the red headed vulture. During the last census conducted in 2010, presence of 69 Indian long-billed vultures and 26 nests were recorded, Goswami adds.

The birds were spotted on Girnar Hills and in nearby Devaliya Park area. Red headed vultures were found in Bordevi area, three km from Girnar hills. Goswami says that the maximum concentration of bird population and nests was exactly along the route of the proposed rope way from the base of Girnar Hills to Ambaji Temple. “If the rope way is built, it will certainly destroy the birds,” Goswami says.

The increase in the bird population, according to Goswami, is a result of untiring efforts by several non-profits and the forest department officials. They spread awareness about the ill-effects of the use of diclofenac, an anti-inflammatory drug used on livestock. The drug kills vultures that feed on the carcasses of livestock treated with the drug. “Veterinary diclofenac was the main cause of dwindling vulture population across the country. We held workshop for chemists and veterinary doctors in Junagadh district and other parts of Gujarat, and asked them to stop using the medicine which was killing the birds,” Goswami says.

Prakruti Nature Centre has been campaigning for vulture conservation for the past five years and has participated in two vulture census exercises. Volunteers of the non-profit distributed copies of the order banning use of diclofenac to all the chemists in the district and convinced them to stop selling it.

Meanwhile, the Gujarat Forest Department is hoping to see an increase in vulture population in the Gir forest as well, after encouraging findings across the state during the census. Over 150 persons, including forest officials and volunteers from various non-profits, participated in the two-day census. As per the figures obtained after last vulture census, the population of the critically endangered bird was pegged at 1,065. “This time there are hopes that the population would have increased across the state like it has in the Girnar hills,” Goswami says.

Vulture decline arrested elsewhere, too According to Vibhu Prakash, senior researcher with Bombay Natural History Society (BNHS) who is in charge of the society's Vulture conservation centre at Pinjore in Haryana, the situation across the country is gradually improving. “There is lot of awareness about vulture conservation in the country. We have observed that use of diclofenac in veterinary treatment has been reduced. Earlier 11 per cent cattle carcasses had diclofenac; now, it has come down to six per cent,” Prakash says.

BNHS has undertaken various projects in Mahua and Ahmedabad areas of Gujarat and after intensive work there is considerable increase in awareness among general public, he says. “However, filtering of human diclofenac into veterinary practice still remains a major issue which needs to tackled,” he says. According to recent surveys conducted by BNHS in different areas, the decline in vulture population has stopped and the numbers are going up gradually, Prakash added.