When exactly did the tiger colonise the Indian subcontinent?

Down To Earth popped the question to geneticists, historians and experts on the cat superstar. Here is what we were able to deduce

It is impossible to tell when tigers colonised India as there is hardly any evidence for this unless one could go back in a time machine, experts have told Down To Earth (DTE) on the occasion of World Tiger Day, 2020.

“Your question actually implies that we tell you when tigers physically walked into India. This is not possible,” Uma Ramakrishnan, molecular ecologist working as an assistant professor at National Centre for Biological Sciences, Bengaluru, told DTE in an email.

“We can, however, suggest when the habitats in India were appropriate for tigers, or when they diverged and became distinct from other tiger populations,” she added.

“No scholar will give an exact date: No visa, stamp or passport. Just accidentally surviving evidence that accumulates over time,” Mahesh Rangarajan, Professor of History and Environmental Studies at Ashoka University at Sonipat, told DTE.

However, Rangarajan added: “If you see the references in author Shibani Bose’s latest work Mega Mammals in Ancient India: Rhinos, Tigers and Elephants, the tiger is very much here in historic times, say 5,000 years ago, Harappa and the pre- and proto-historic epochs.”

“We will keep revising and learning about the time and sequencing. But the record in and of human cultures shows a long association with the tiger,” he noted.

Rangarajan is right about the presence of the tiger in the consciousness of ancient India.

In her book, Bose uses “an archive comprising archaeology, a gamut of literary texts as well as visual depictions” to etch out faunal histories of rhinos, elephants and tigers in ancient India.

“The tiger has scant presence in the fossil record, but figures in the archaeological record at Mesolithic Mahadaha, Neolithic Loebanr III and Aligrama in Swat, at Atranjikhera and at Madar Dih,” her book notes.

Despite the scant evidence as far as fossils are concerned, tigers abound in literary and pictorial representations of ancient India.

“Whether it is the ritualistic corpus of Vedic literature, the philosophical discourses of the Buddhist and Jaina canons, texts of jurisprudence (the Dharmasastras), the medical treatises of Caraka and Susruta, the intrigues and battle scenes intrinsic to the two epics, a political treatise like the Arthasastra or the often warped classical Western accounts, placing animals in their natural settings with subtle allusions to their ways, is endemic within textual traditions,” Bose’s book says.

India’s ‘tiger man’, Valmik Thapar, had this to say about the depictions of the magnificent cat in his 2002 work, The Cult of the Tiger:

“The earliest depictions of the tiger on the Indian Subcontinent go back to Harappan seals dating back to 2500 BC. Sometimes the tiger is horned and is seen standing with a trough-like object in front of him. On another seal is an intriguing figure, the hind portion of which is that of a tiger and the front portion that of a woman; the woman has a conspicuous long plait and a tree growing above her head. Another seal depicts a nude female, upside down with thighs held wide apart, with two tigers standing on one side. The ritual significance is not clear but evidently, it evokes a feminine connection of the tiger with either fertility or birth.”

From China to India

In recent years, experts have attempted to put forward some tentative dates for the arrival of the tiger in the Subcontinent.

“Previous studies indicate tigers might have evolved near the South China region and dispersed from there,” Ramakrishnan said.

Large cats including tigers evolved from a common ancestor probably similar to modern-day leopards or jaguars five million years ago, Thapar had noted in his 2002 book.

“Studies based on models of habitats and climate suggest tigers occupied most of India around 12,000 years ago,” Ramakrishnan added.

The study she cites is Biogeographical change in the tiger, Panthera tigris. Animal Conservation 3.2 (2000): 113-124 by Andrew C Kitchener and Andrew J Dugmore. 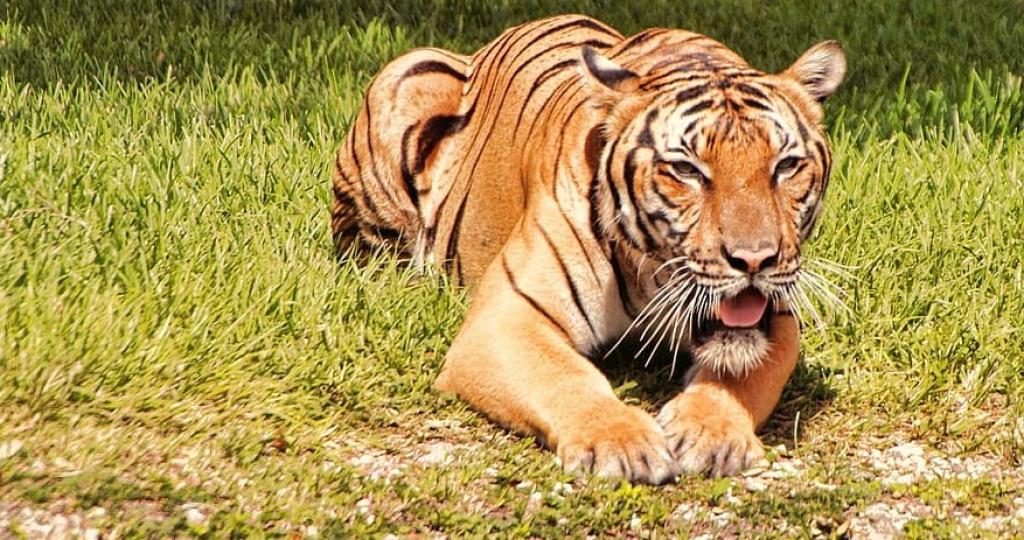 “Our studies based on genome sequencing suggest that Indian tigers diverged from other tigers relatively recently, around 8,000-9,000 years ago (Armstrong et al 2019). This paper has not yet been peer reviewed,” she said.

The paper in question is Recent evolutionary history of tigers highlights contrasting roles of genetic drift and selection. bioRxiv (2019): 696146 by Ellie Armstrong.

A question that arises is: If tigers evolved in southern China, which route did they take to enter South Asia? Here, Ramakrishnan offers another tantalising clue.

“Our models of demographic history of tigers using whole genome sequences (Armstrong et al 2019) suggest Northeast Indian tigers are (a) closest to south east Asian tigers and (b) the most divergent of populations within Indian tigers. Together, these results indicate that tigers may have entered India through Northeast India,” she says.

Divyabhanusinh Chavda, author of two highly acclaimed books on India’s lions and cheetahs, echoes Ramakrishnan’s views. “You are finding tigers at very high altitudes in Nepal and Bhutan. It is quite possible that the tiger may have crossed over from the Himalayas, somewhere in the Arunachal and Upper Assam area,” he said.

DTE had reported on how tigers had turned up in the snow-clad Eastern Himalayas of Arunachal Pradesh and Sikkim in 2017 and 2018, in its story Roars in lost land (March 16-31, 2019). We had questioned then as to whether the tigers sighted had always lived there or were migrants in search of a better habitat.

When the tiger came to India, how did it colonise the country’s entire landmass?

Although Thapar did not give a time or route, he did have this to say in The Cult of The Tiger:

“The tiger quickly spread throughout India, moving into the mangrove swamps, evergreen forests, dry deciduous forests, and the variety of other vegetation that covered Indian land.”

Again, Ramakrishnan offered some cues: “Demographic simulations using whole genome sequences (Armstrong et al. 2019) potentially suggest that the Northeast Indian tigers are the most distinct. There are other populations of tiger in India, like central Indian tigers, Western Ghats tigers and south Indian tigers, but they diverged from each other around the same tiger,” she said.

So there you have it. According to contemporary wisdom, tigers moved into India roughly 12,000 years ago, possibly through the Eastern Himalayas.

However, this wisdom too can change in the years to come. “This whole business of evolution is in a flux. Everyday, something new pops up,” Chavda said.