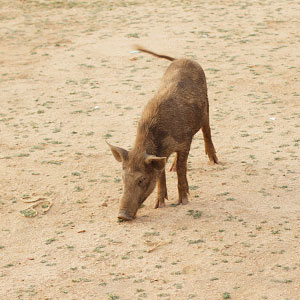 After being declared as vermin in Bihar less than two months ago, the nilgai got a saving grace in Uttarakhand where the union ministry refused to grant the shoot-at-sight-in-forest-peripheries permission to the blue bull.

The wild boar, however, has not been as lucky. The Centre has declared wild boar as vermin in Uttarakhand effective from February 3, 2016 for a period of one year.

According to the notification issued by Vinod Ranjan, additional director general of forests (wildlife), the Central government declared "wild pig (sus scrofa) listed at serial number 19 of the schedule III of the Act, to be vermin and to be included in schedule V of the Act for a period of one year from the date of issue of this notification, which is February 3 in exercise of the powers conferred by section 62 of the Wild Life (Protection) Act, 1972.”

According to Dhananjay Mohan, chief conservator of forests, Uttarakhand, “The locals do not need permission to cull the animals once it has been declared as vermin and is found in the agricultural land. Killing it however in the protected areas (viz. reserve forests and the like) is still punishable under the Wildlife Protection Act.” He added that the locals have no other necessity to kill the wild boar than to protect their crops as the boar's meat is not very palatable.