Wildlife Protection Amendment Bill: Why ‘religious or any other purpose’ clause has enraged animal activists

The term could potentially increase the demand for illegal capture of wild elephants, followed by cruel training, they say 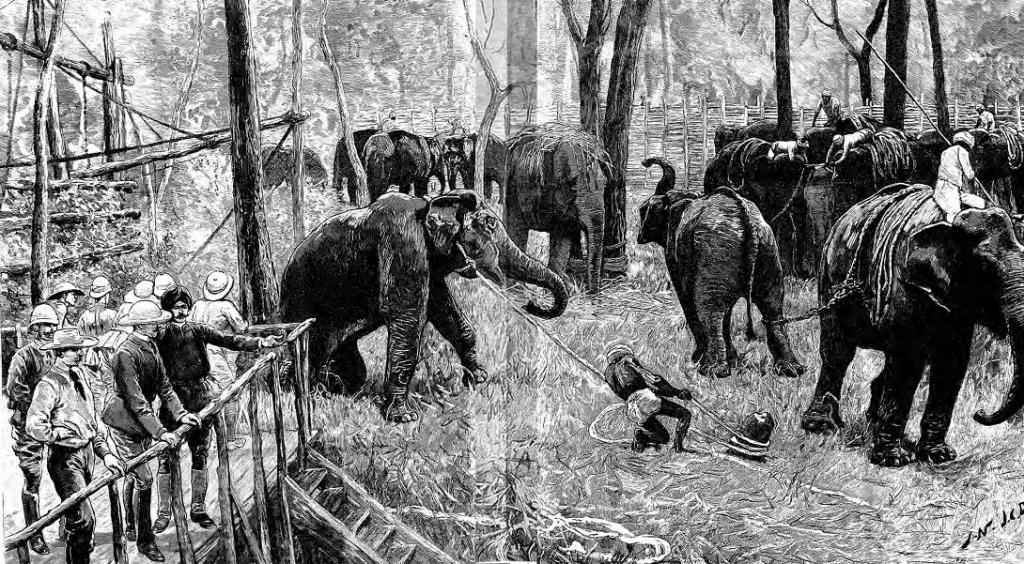 An illustration showing the capture of wild elephants using the 'Kheddah' or stockade method in the Kingdom of Mysore, British India. Photo: Wikimedia Commons

The Wildlife Protection Amendment Bill was passed by the Lok Sabha August 3, 2022. The Bill, which makes amendments to the Wildlife (Protection) Act of 1972, was introduced in the Lok Sabha by the Union environment ministry in December 2021. However, as it awaits passage in the Rajya Sabha, one amendment has got the critics’ goat.

The amendment made to Section 43 of the WLPA permits elephants, a Schedule I animal, to be used for ‘religious or any other purpose’. The move has been criticised by wildlife activists and animal experts.

Animal rights group PETA India pointed out that the ‘any other purpose’ seemed to have a limitless meaning.

This would thereby potentially increase the demand for illegal capture of wild elephants, followed by cruel training in kraals, which are small, dark wooden enclosures.

Elephants are jabbed with sharp ankushes or, elephant goads, during training. The animals are also hit with sticks in order to break their spirits, a sentiment echoed by the Centre for Research on Animal Rights (CRAR), a research centre based in Goa working to advance animal rights in India.

“At a time when countries, citizens and the honourable courts of justice around the world are increasingly making decisions against keeping intelligent animals in captivity, this amendment in law sends our country back to the Dark Ages,” Khushboo Gupta, director of advocacy projects, PETA India, told Down To Earth.

Earlier, the Bill of 2021 had carved out an exception by proposing an amendment under Clause 27 that stated, “This section shall not apply to the transfer or transport of any live elephant by a person having a certificate of ownership, where such person has obtained prior permission from the State Government on fulfilment of such conditions as may be prescribed by the Central Government.”

PETA India had appealed in a letter to Prime Minister Narendra Modi to withdraw Clause 27, as it would encourage the illegal capture and commercial trade of elephants in India, defeating conservation efforts.

The group had also warned that the amendment might increase cruelty to elephants in captivity and promote institutionalised corruption, as illegitimate ownership certificates would be used to conduct trade.

The Parliamentary Standing Committee (PSC), headed by Jairam Ramesh, Rajya Sabha member and former environment minister had made recommendations for the deletion of this clause.

The PSC had stated that “it (the clause) has raised serious concern in the wildlife conservation community”. But it happened to introduce a new angle to the clause by stating that it was apprised of the fact that elephants play a crucial role in daily worship and rituals.

This recommendation by the PSC stated:

Provided that the Central Government, may if it considers appropriate, prescribe such additional terms and conditions as may be necessary, subject to which any transfer or transport of an existing captive elephant for a religious institution may be conducted by a person having a valid certificate of ownership.

The PSC stated that this be included instead of Clause 27.

Ritwick Dutta, founder of Legal Initiative for Forest and Environment pointed out that the provision of transfer and transport of captive elephants subject to conditions prescribed by the central government also existed in the present law.

But the use of the word ‘religious’ seemed to have been added due to the PSC’s recommendation, he added. This provision was recommended to be inserted after sub-Section (2) of Section 43 of the principal Act.

However, wildlife experts said the amendment still catered to the demand of captive elephants and could lead to the capture of wild elephants and their taming with brutal means to break them down and domesticate them.

Alok Hisarwala, founder of CRAR, said, “This is the first-time religion has expressly been used in the Act, to carve out an exception to use and trade in a Schedule I animal. It must worry us.”

He added that if the ministry wanted to allow the use of elephants for religious purposes, where had the term ‘any other purpose’ come from in the final bill.

“Tuskers can now be acquired by any private or religious institution for religious or any ‘other purpose’. This ‘other purpose’ term is broad and vague and needs to be defined and limited. The law has now created a legally sanctioned right to ‘use’ an elephant,” he said.

Dutta though said it was a relief that commercial trade in elephants had not been permitted, as proposed by the 2021 amendment Bill.

“Section 43, which prohibits commercial trade, will continue to exist. It is pertinent to point out that the Bill of 2021 specifically allowed commercial trade in ‘live elephants’ whereas the Bill passed in 2022 refers to transfer (non-commercial) and transport of ‘captive elephants’,” Dutta noted.

‘Live elephants’ could mean wild elephants which have been captured. “The Bill of 2022 as passed by the Lok Sabha on August 2 has solved this major flaw with the Bill of 2021,” he added.

Hisarwala said it was necessary for the forest department to ask questions about captive elephants and where they were coming from whenever there was a transfer request.

This was because ‘captive elephants’ were actually often captured from the wild and forced into submission by torture.

He also questioned the reason behind religious institutions not owning elephants themselves but always getting private owners to transfer or gift the animals to them.

“In the garb of religion, these elephants are used for begging, load-carrying and entertainment. This word ‘other purpose’ defeats all purposes of protecting a Schedule I animal,” he said.