We must depart from narrow solutions and find opportunities in our mountain landscapes to secure larger habitats, writes ICIMOD's Rajan Kotru 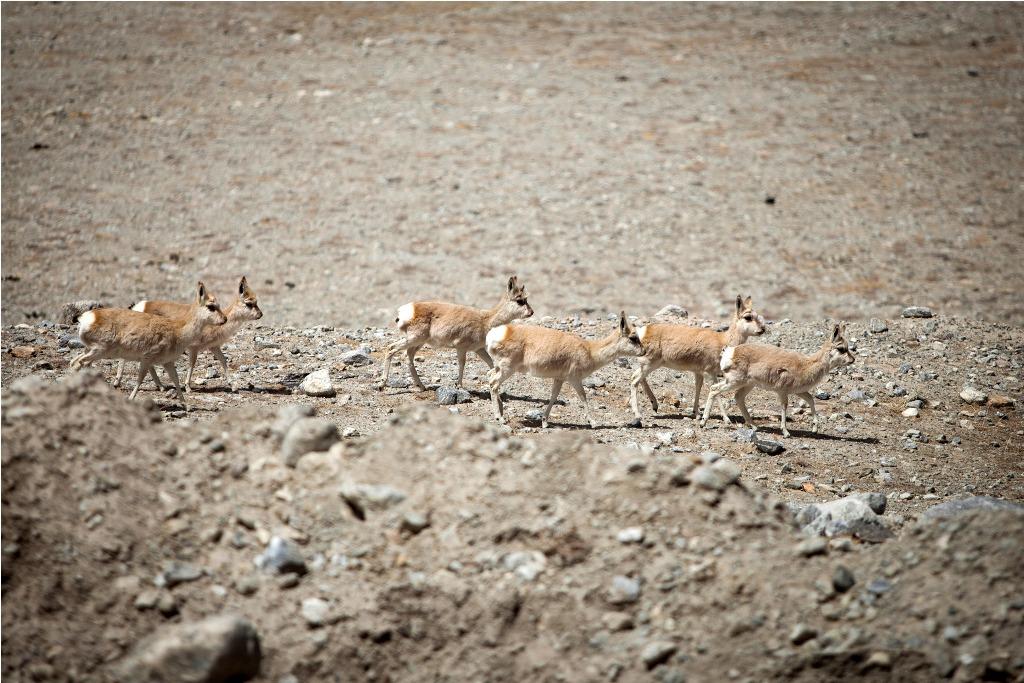 Uncontrolled poaching has led to declines in the population of Tibetan antelope in China and India; they are no longer found in Nepal (Photo: Jitendra Raj Bajracharya/ICIMOD)

In a world where consumerism and materialism are increasing, the celebration of World Environment Day is a time to reflect on whether our collective behaviour needs to be modified to address challenges such as climate change and biodiversity loss. This day should be used to remind us that there is only one living world, but that our demands are unlimited. It can be safely said that targeting positive impacts based on the Sustainable Development Goals (SDG) 2030 will help preserve the environment and lead to a safer world for all.

This year, the theme of World Environment Day is "Go wild for life". SDG 15, which deals with "Life on Land", calls for global support for efforts to combat the poaching and trafficking of protected species, including by increasing the capacity of local communities to pursue sustainable livelihood opportunities. This is in line with the Convention on Biological Diversity (CBD), which came into effect at the Earth Summit in 1992. The CBD has three main goals: the conservation of biodiversity, the sustainable use of biodiversity, and the fair and equitable sharing of benefits arising from genetic resources. These goals aim to make the world a safer place for people, as well as for the plants and wild animals around us. The convention reminds natural resource governance decision-makers that natural resources are finite and sets out a philosophy for their sustainable use. It links traditional conservation efforts to the economic goal of using biological resources sustainably.

More than two decades after the Earth Summit, we have made some progress on wildlife conservation. In Nepal, we can be proud of two years of "Zero Poaching" of rhinos, which is an inspirational feat. Similarly, there has been an increase in the number of tigers in India and recovery of the population of Tibetan Antelope in China, which were nearly extinct. This proves that political will combined with targeting poachers, sharing good practices, and raising awareness, particularly among youth, can help local communities and conservation agencies to work together to sustain wildlife populations.

According to TRAFFIC, the estimated value of global imports of legal wildlife products annually increased more than twofold in 2009, from US $160 billion to $323 billion. However, the positive balance sheet of regulated achievements has caveats. Although estimates suggest that less than a fifth of the wildlife trade is unlawful (for example, rare and threatened species that are poached or collected illegally), this trade has transnational dimensions. In the Hindu Kush Himalayas (HKH), there is a vast array of wildlife products (food, wool and fur, leather goods, tourist curios and medicines) that are part of an illegal trade across borders, which has the potential to drive species to extinction. Snow leopard skins and tiger bones are frequently seized from smugglers and poachers crossing HKH borders. One of the problems with controlling this trade is the disconnect between global environmental agreements, such as the Convention on International Trade in Endangered Species of Wild Flora and Fauna (CITES), and national laws and implementation capacity. In an assessment of the illegal wildlife trade in 2014 for Chatham House, Lawson and Vines found that national legislation is often inadequate to protect endangered species and regulate cross-border trade.

Current research on good management practices is solidly supportive of the connection between species diversity and the stability of ecosystems. Species richness and genetic diversity enhance the productivity and stability of terrestrial and marine ecosystems and their resistance to invasion by weedy species, as well as agricultural productivity. Research shows that greater species and genetic diversity also reduces the transmission of disease among species. In the HKH, several ecosystems and the interfaces between them have been degraded and habitat fragmentation is common. Although necessary, strong legal back-ups, improving natural resource governance, and building strong institutions to counter illegal wildlife trade may not suffice to conserve wildlife. Habitat fragmentation has increased human-wildlife conflict in the HKH, and the resulting crop losses and human casualties are leading to indifference (and even resistance) to wildlife conservation among rural populations. Another concern is the expansion of rural and urban development in the HKH, which is threatening existing bio-corridors. To sum up the long list of contemporary issues, we can no longer ignore the climate change impacts, which are threatening the habitat and the water security of wild animals, and much be prepared for the possibility of socio-demographic changes, which may weaken local institutions and community conservation practices.

In the spirit of celebrating World Environment Day 2016, we must depart from narrow solutions based on villages and sub-watersheds and find opportunities in our mountain landscapes for transnational cooperation to secure larger habitats through joint conservation approaches. In this complex set of challenges facing wildlife conservation in the HKH there are trade-offs, such as between having a mountain road or a bio-corridor that secures endangered wild animals and preferably local livelihoods as well. We need the right kind of interventions backed by investments, and we need these interventions to be implemented on a larger, transboundary scale, with long-term consensus-oriented planning, implementation and monitoring that involves local people. The landscape approach tested in the Terai Arc Landscape in Nepal and the Kailash Sacred Landscape in China, India and Nepal, and the "Human Wildlife Safe System Approach" being tested in Bhutan, could change the way that we approach wildlife conservation. Although such an interdisciplinary holistic approach is easier said than done, early models of transboundary cooperation (such as cross-border meetings between key stakeholders on wildlife themes, common transboundary vegetation maps using remote sensing for long-term planning, and common research methodologies) are available and can be replicated to secure our biodiversity. We must act now, as custodians of our mountain biodiversity, which sustains us and our environment, to ensure that this great richness can be enjoyed by future generations.