Fund so collected will be spent on conserving forests, managing human-wildlife conflict and generating livelihood for local communities 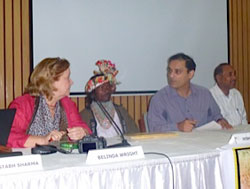 Hoteliers and tour operators who have been cashing in on wildlife tourism without bothering about local communities and resources might finally have to part with a good share of their profit for wildlife and forest dwellers. The Union Ministry of Environment and Forests (MoEF) has decided that hotels and resorts within a five kilometre radius of national parks and sanctuaries should be charged a minimum 10 per cent of their turnover as local conservation fee. The fund thus collected will be spent by states on conservation of forest resources, managing human-wildlife conflict and generating livelihood for local communities.

The move comes in the backdrop of a Supreme Court case where the apex court is considering whether tourism should be allowed in the core areas of tiger reserves. In March last year, Bhopal based non-profit Prayatna filed a public interest petition in the apex court, pleading that critical tiger habitats should be kept inviolate of all kinds of human disturbances, including tourism. The National Tiger Conservation Authority of the ministry supported the petition, saying tourism should be phased out from the core areas. Regulated tourism can be allowed in the buffer areas, it said. The court, however, directed the ministry to finalise the eco-tourism guidelines for the protected areas, due since June last year before it would decide the matter.

In the new guidelines, finalised on June 12, the ministry has reiterated that tourism should be phased out gradually from the core areas. As an interim measure, it suggested that for tiger reserves with the core areas of more than 500 sq km, community-based tourism can be allowed in a maximum of 20 per cent of the core zone. In return, 30 per cent of the buffer area will have to be restored as wildlife habitat. For core areas smaller than 500 sq km, 10 percent of the core can be opened for tourism subject to the condition that 20 per cent of such area is restored as wildlife habitat.

The ministry told the court that the mushrooming of high-end tourist facilities around protected areas in recent years has led to exploitation, degradation, disturbance and misuse of fragile ecosystems, causing “further alienation of local people”. The guidelines, thus, aim to make  tourism in such areas community-based and community-driven. “Any core area in a tiger reserve from which relocation has been carried out will not be used for tourism activities. Forest dwellers who have been relocated will be given priority in terms of livelihood generation through community-based eco-tourism,” the guidelines say. Local home stays will be exempted from the conservation fee.

The guidelines prescribe roles and responsibilities for the state governments, protected area managements and the resort owners. They direct the states to formulate eco-tourism strategy within one year to ensure local community participation and benefit-sharing and ensure that forest and wildlife is conserved in the ecologically sensitive areas and in the critical wildlife corridors. A state-level steering committee under the chief minister, which would include the chief wildlife warden and representatives of local communities, tribal welfare department, Panchayati Raj institutions and civil society institutions, will periodically review this strategy.

The guidelines say every protected area should have an eco-tourism plan which demarcates the area open for tourism, estimates carrying capacity of the area and fixes the number of tourists accordingly and sets in place a monitoring mechanism to asses impact of tourism. The guidelines say that tourism infrastructure must be low key comprising low-impact architecture, renewable, waste recycling, water management and made in a way sensitive to the corridor value of the area. At least 50 per cent of the energy of the resorts should be generated from renewable sources. The guidelines say a local advisory committee of the officials at the division/district level, local experts and community members should be formed to monitor the practices of the resort owners.