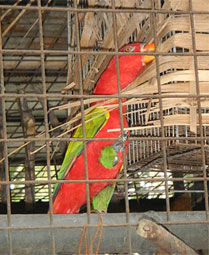 An international survey carried out by the International Fund for Animal Welfare (IFAW) has found that trade in rare and critically endangered birds and animals and body parts is thriving on the Internet.

IFAW, which worked with law enforcement professionals to analyse the online trade in 16 target countries over a six-week period in early 2014, released its findings on Tuesday, according to a report in the British daily, The Guardian.

IFAW and the authorities assisting it, found over 10,000 advertisements on 280 websites. The advertisements featured 33,000 animals and items that should be protected by international laws on sale and were valued at a total of US $11 million.

The study found that the maximum number of online advertisements for animals and animal parts were in China, followed by Germany, France and the United Kingdom.
The team conducting the study found wildlife, both dead and alive, for sale.

The highest number of advertisements for large, live animals was found in Russia and Ukraine. Websites in West Asia also offered live animals.
Overall, ivory was the most commonly-touted product in the online advertisements, accounting for almost a third.

“Wildlife crime can seem like a remote problem but the Internet brings it into everyone’s home,” Philip Mansbridge, IFAW’s UK director told The Guardian. He said the report, while wide-ranging, exposed only a fraction of wildlife cybercrime. “If you think about all the countries in the world where people are using the Internet, then it is obvious the scale of the trade is mind-blowing.”