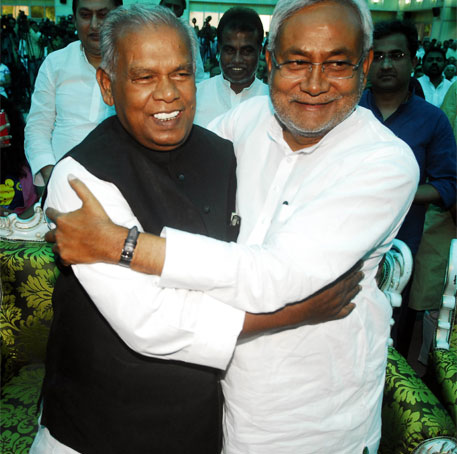 After his Bihar development model agenda failed to fetch seats for his party in the just concluded Lok Sabha election, Janata Dal (United) leader Nitish Kumar resorted to a bit of social engineering to consolidate his party’s position before the next state Assembly election. He anointed a person from the most backward caste to succeed him. Jitan Ram Manjhi has become the first chief minister (CM) of Bihar belonging to Musahar caste after a swearing-in ceremony held at Raj Bhawan on the evening of May 20.

Musahars are a rat-eating community in Bihar that has been excluded from development for a long time.

Manjhi, just like his predecessor, Nitish, will be handling 16 key departments. His Cabinet has been reinstated with previous ministers with addition of two new faces- Lacy Singh and Vinay Bihari.

Manjhi is MLA from Makhdumpur constituency in Jehanabad district.

He had served as minister under Lalu Prasad Yadav-led Rashtriya Janta Dal government in Bihar and also during Nitish-led JD(U) regime. He recently lost the just-concluded parliamentary election from Gaya constituency.

Manjhi has more or less a clean record. He was an accused in the Bachelor of Education (B.Ed) colleges’ recognition scam during his tenure as education minister in Lalu-Rabri Devi regime. Manjhi had to resign following a court case, but was later absolved of the charges.

Caste over development
Many political stalwarts are seeing nomination of Manjhi as a caste game by JD(U) to win the Assembly election in 2015.

But D M Diwakar, director of Patna-based AN Sinha Institute of Social Studies, an autonomous research institute under the Bihar government, says that Nitish has set an example by resigning from the post of CM and designating a dalit leader as successor.

“Look at the pro-development policies of Nitish. He has not only set up the Mahadalit Mission but also set up a commission for its development,” he said. He added that the former chief minister had also started the homestead land scheme for dalit families.

“Manjhi will definitely understand and work towards uplift of dalits in Bihar,” he said.

Kisori Das, an Aam Aadmi Party candidate in the Lok Sabha election and a dalit leader, disagreed. He said that both the dalit commission and mission in the state have failed to meet their objectives.

He elaborated that the Nitish government did not implement land reforms and also refused to implement common school system. A vast section of dalits still live in slums that have no basic amenities.

“Manjhi had been minister in all the regimes since 1980. He has rarely done anything significant for dalits during 25 years of his political career,” Das said. He further added that Manjhi has rarely raised the issue of Musahar during his tenure as minister.

There are around 2 million musahar people in Bihar.

He further added that Nitish has failed miserably in bringing real development. “Now he wants to retain power through caste-approach to win elections,” he said.

Diwakar accepts that key reforms like land and education for dalits was ignored by Nitish. “But that was a political alliance compulsion. Now, Nitish is out of alliance with BJP and his sacrifice to give up the throne will help him work better,” he said.

But Das refutes such claims by pointing out that homestead land promised by Nitish Kumar was a land grab agenda. “Why don’t these pro-Nitish groups talk about Dalit land scam that emerged in 2011-2012?” he asked.