The Competition Commission of India (CCI) has imposed a penalty of Rs 6,306.59 crore on 11 major cement manufacturers of India for forming a cartel, leading to high cement prices and restriction on competition. The penalty charged is 50 per cent of the profits incurred by the companies in the years 2009-2010 and 2010-2011. But the penalty is not enough considering the companies have been raking in large profits since 2005, say builders who had petitioned CCI against cement cartelisation.

CCI, in its order passed on June 21, said that cement manufacturers have violated the provisions of the Competition Act of 2002, which deals with anti-competitive agreements, including cartelisation. The order was passed pursuant to an investigation by A K Chauhan, director general of CCI, on information submitted by the Builders Association of India.

The competition watchdog in its order observed that the Cement Manufacturers' Association (CMA), the apex body of cement manufacturers in India which has both the private and public sector cement companies as its members, may have acted as a platform for cartelisation. The exchange of production, dispatch and utilisation capacity of different cement plant members is shared through CMA. Hence, 10 per cent of CMA's turnover for three years (2008-09, 2009-10, 2010-11) which is 0.73 cr is charged as penalty, the order says.

The CCI order has directed CMA to disassociate itself from collecting wholesale and retail prices through the cement companies. The order has also prohibited CMA from circulating production and dispatch details of cement manufacturers among their members.

D L Desai of Builders Association of India, who brought the case to the notice of CCI, says the penalty imposed is not enough.  “In any case,” he says, “the order will not impact the industry; after three to four months they (cement companies) will hike the price in order to recover their losses.” Desai says there has been a decline in growth rate of the construction sector because of the hike in the cement prices since 2005. Though the construction sector's demand for cement grew by leaps and bounds, the production of cement showed a declining trend. “We got to understand that the cement plants are under-utilising their capacities with some motives. So we petitioned CCI in 2010 and the  case was taken up for hearing on March 21, 2011,” he adds.

As per the order, the cement manufacturers have been directed to deposit the penalty amount within 90 days.  They have also been directed to “cease and desist” from indulging in any activity relating to agreement, understanding or arrangement on prices, production and supply of cement in the market.

Although there is going to be a decline in the profit margins of the cement manufacturers none of them will be operating at a loss (see 'Profit margin before and after penalty').

(Table) Profit margin before and after penalty


(Graph) Profit margins with and without penalty 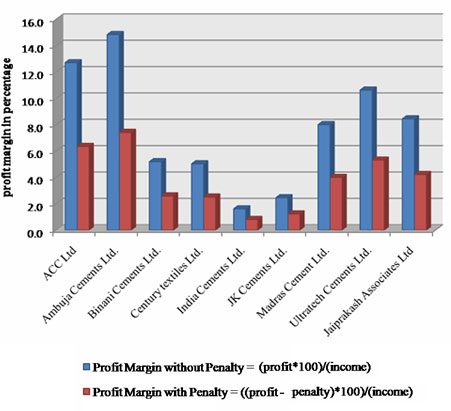 S K Dalmia, the acting secretary of CMA refused to comment on the order saying he was yet to go through it. He says there is nothing abnormal in the cement price increase in the past two to three years. “There is no balance in our economy and inflation is a common phenomenon happening all around, so it is obvious that cement prices will also increase. There is no product which can be named in India the price of which has gone down in the past years,” he says to buttress his argument.

Ambuja Cement, through a press release on its website, has contested  the allegations and findings against it and says it will file an appeal before the Appellate Tribunal and seek a stay.

Camille M Gonsalves, senior vice-president with Lafarge India, says the company has a strict policy in place to fully comply with competition laws. “All units operate under the Group's Code of Business Conduct,” he adds. “We will review the detailed reports and decide the suitable actions to take,” says Gonsalves.

The market shares of the penalised cement companies has, meanwhile, fallen since the evening of June 21 after the order was passed.