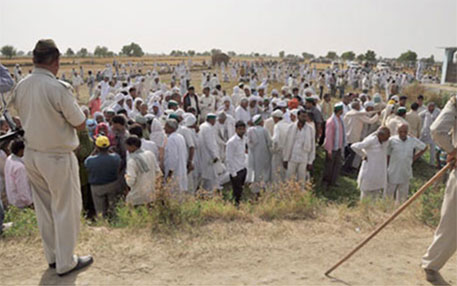 The Lok Sabha on Tuesday passed the controversial Land Acquisition (Amendment) Bill with nine amendments and two new clauses following two days of discussion. The Opposition parties along with important allies of the ruling Bharatiya Janata Party, Shiv Sena and Shiromani Akali Dal, objected to major amendments in the land acquisition law which dilute provisions for “consent” from those whose land is to be acquired and social impact assesment (SIA).

The major Opposition parties, Congress, Biju Janta Dal and Telangana Rashtra Samithi, walked out of the House to protest dilution of the land acquisition law passed by previous Congress-led UPA government in 2013.

After getting it pushed through Lok Sabha, the government now has the tough task of getting the Bill past Rajya Sabha where it is not in majority.

Responding to Opposition objections in Lok Sabha, Union rural development minister, Birendra Singh, hit out at rival party members, saying most of them are opposing the amendments only for the sake of opposition.

Singh was in the Congress party when the Congress-led UPA government enacted the Right to Fair Compensation and Transparency in Land Acquisition, Rehabilitation and Resettlement Act 2013 (LARR), which replaced the century-old Land Acquisition Act of 1894. Now that he is part of the BJP-led National Democratic Alliance (NDA), he is advocating dilution of provisions like “consent” from farmers that lie at the heart of the 2013 Act.

What’s more, in 2013, when BJP was the Opposition party, it had supported the Act and also promised to make it more people- and farmers’-friendly once it come to power. Instead of making it stronger, the BJP-led government is doing away important provisions like “consent” clause and the mandatory SIA in the existing Act. If these amendments become the law, public-private partnership projects (PPP) that include private health and educational institutions, defence manufacturing projects, land purchasing for affordable housing projects, industrial corridors and rural infrastructure, will not need to get consent from land owners/farmers or conduct SIA.

The amendment bill was preceded by an ordinance—Right to Fair Compensation and Transparency in Land Acquisition, Rehabilitation and Resettlement (Amendment) Ordinance. It was issued on the eve of new year with the aim of diluting the few safeguards provided for the affected people in LARR Act, popularly called the Land Acquisition Act. The justification given by the government is that the 2013 law will halt development.

The amendment Bill was introduced on February 24 to replace the ordinance. NDA faced protests not only from Opposition parties, but also from its own allies, like Shiv Sena, Siromani Akali Dal, Lok Jan Shakti Party and Swabhimani Paksha. Outside Parliament, well-known social activist, Anna Hazare, staged a two-day sit-in protest along with about 1,000 farmers and social activists, terming the Bill anti-farmer.

The amendments proposed by NDA cover 13 other Acts, which were earlier excluded. These Acts include the Coal Bearing Areas Acquisition and Development Act 1957, the National Highways Act of 1956, Land Acquisition (Mines) Act of 1885, the Atomic Energy Act of 1962, the Indian Tramways Act of 1886, the Railways Act of 1989, the Ancient Monuments and Archaeological Sites and Remains Act of 1958, the Petroleum and Minerals Pipelines (Acquisition of Right of User in Land) Act of 1962 and the Damodar Valley Corporation Act of 1948. The Electricity Act of 2003, Requisitioning and Acquisition of Immovable Property Act of 1952, the Resettlement of Displaced Persons (Land Acquisition) Act of 1948 and the Metro Railways (Construction of Works) Act of 1978 are also brought under its purview to provide higher compensation, rehabilitation and resettlement benefits to farmers whose land is being acquired.

LARR 2013, replaced the colonial Land Acquisition Act of 1894 which was based on forced acquisition of land, leaving millions of people impoverished and depriving them of livelihood.
According to the government, the 2013 Act has stalled investment up to 20 lakh crore, especially in rail, steel, mining and roads sectors.

Earlier on Monday, during the debate on land Bill, Venkaiah Naidu, the parliamentary affairs minister, assured the House that the minister concerned would keep in mind the practical suggestions given by MPs. But he insisted that the proposed amendments were introduced after taking into consideration views of all 30 states.