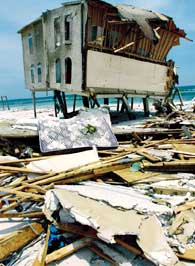 hurricanes and typhoons are growing fiercer and last longer due to global warming, claims a us study that found a striking correlation between the destructive potential of storm winds and sea surface temperatures.

The potential wind-caused damage has roughly doubled over the past 30 years, says Kerry Emanuel, professor of Earth, Atmospheric and Planetary Science at Massachusetts Institute of Technology (mit). Emanuel analysed data collected by aircraft and satellites since the 1950s from actual storms. He found the amount of energy released in these storms in both the North Atlantic and the North Pacific oceans has increased, especially since the mid-1970s. The findings appeared in Nature (Vol 436, No 7051, August 4, 2005).

Some scientists have, however, questioned Emanuel's methods. The mit researcher did not consider wind speed information from some powerful storms in the 1950s and the 1960s whose details were inconsistent.

"I'm not convinced that it's happening," said Christopher W Landsea, who works at the Atlantic Oceanographic & Meteorological Laboratory in Miami.

He has commented that the unadjusted figures show no overall trend, raising doubts over Emanuel's model. Interestingly, Landsea had resigned from the Intergovernmental Panel on Climate Change (ipcc) in January following comments made by Kevin Trenberth, lead author of the Fourth Assessment report of ipcc. Trenberth had said "global warming is likely to continue spurring more outbreaks of intense hurricane activity", without scientific findings to support this claim.