Women and a nervous regime 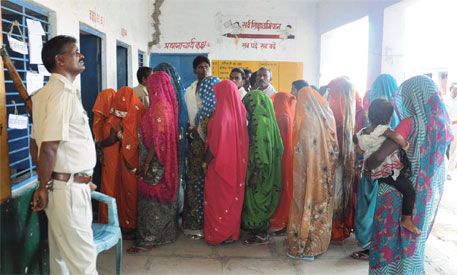 FINANCE Minister P Chidambaram smiled once during his two-hour-long budget speech on February 28. And that was when he proposed to set up an exclusive public sector bank for women. In what could be interpreted as a political tweak, Chidambaram also gestured to Leader of Opposition Sushma Swaraj during the announcement. Returning the gesture, Swaraj and Sonia Gandhi, chairperson of the ruling United Progressive Alliance (UPA), thumped the desk.

This is not all. The UPA-government also proposed a special fund for women. Under the gender budgeting provision, adopted since 2007, it allocated Rs 97,134 crore for women-related programmes. Usually conservative and careful in selection of words, Chidambaram used “woman” 22 times in his short speech.

The woman-centric budget is seen as a step by the UPA-government that faces elections next year to appease the country’s women, still outraged over the gang rape and murder of a girl student in Delhi in December last year. But it has more to do with a new reality: emergence of women as a much sought-after vote bank. No political party, national or regional, can ignore this constituency with 384 million voters.

In recent years, more women than men have voted in several states. The difference in men-women turnout has diminished by one-fourth in the past five decades (see graph). 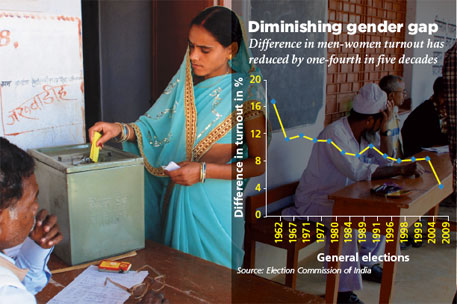 During the last general elections in 2009, six states witnessed women turning out in higher numbers than men to exercise their franchise. Congress, which leads the UPA, garnered substantial women votes due to the Mahatma Gandhi National Rural Employment Guarantee Programme that offers equal wages to men and women. The trend has also been evident in Assembly elections. On the day Chidambaram presented the budget, Nagaland Assembly election results were declared. Over 91 per cent of women had voted against 89.92 per cent men. Five of the seven states that went to the polls last year also witnessed women casting votes in higher numbers than men. In Uttar Pradesh, the most populous state and not known for women empowerment, 60.29 per cent women exercised their franchise compared to 58.82 per cent men.

“This change can be attributed to an unprecedented increase in political participation by women, panchayat reservation and women-centric development programmes that have boosted women’s participation (in politics),” says Zoya Hasan, who teaches political science at the Jawaharlal Nehru University (JNU) in Delhi. The change has also triggered designing of more schemes, mostly conditional cash transfer programmes, to gain women’s votes.

The increasing political consciousness among women is broadly due to two factors: years of structural changes in India’s governance and the self-help movement. There are about a million elected women panchayat leaders in the country. Reservation for women in panchayats has not only raised awareness among them, it has nurtured them to become leaders. Soroor Ahmed, a senior journalist in Patna, says, “Up to 50 per cent reservation for women in Bihar and further reservation of extremely backward castes in the seats has lead the most dominant of the communities, mostly Yadavs, to field women candidates in panchayat polls.” If this 50 per cent reservation is applied across the country, India will have more than 1.4 million women panchayat leaders.

The rising political participation of women also finds its roots in the ever-increasing self-help groups (SHGs) in the country. According to NABARD (the National Bank for Agricultural and Rural Development), there are eight million SHGs in the country with about 97 million members. SHGs have emerged as the most dynamic village level institutions led by women and are involved in almost all development activities. Studies in Tamil Nadu, Kerala and Andhra Pradesh show the self-help movement has led to larger electoral participation of women. It is no surprise that states now overtly declare schemes and incentives to SHGs to get their political support. In January this year Navin Patnaik, chief minister of poll-bound Odisha, declared Rs 10,000 to each of the state’s 100,000 SHGs with a million members.

Women as a targeted constituency has gained political weightage since the re-election of Nitish Kumar as the chief minister of Bihar in 2010. He had launched a series of populist schemes and declared 50 per cent reservation for women in panchayats to nurture this constituency. Schemes like cash incentives to girl students scoring high marks in examinations and cycles for higher school students created a captive vote bank for him. In Madhya Pradesh, the BJP-ruled government has also floated similar incentives. Chief Minister Shivraj Singh Chauhan has launched several schemes for women and girl children, including cash benefits for education and marriage after eligible age. So is his focus on women-related schemes that he is popularly known as “mamu” (maternal uncle) among women.

For the Congress, budget 2013-14 is not the first salvo to capture women voters. In fact, it is the latest in a long series of programmes and policies the party has evolved since it came to power in 2004.

Between 2005 and 2011, the government declared major programmes for women, keeping an eye on the young and old women voters and cutting across socio-economic and religious lines. These include Rajiv Gandhi Scheme for Empowerment of Adolescent Girls; Indira Gandhi Matritva Sahyog Yojana to support poor pregnant women; Mahila Kisan Sashaktikaran Yojana for women farmers; the Scheme for Leadership Training of Minority Women; Ujjawala for combating trafficking; and Dhanalakshmi to tackle declining sex ratio. In 2010, it launched the National Mission for Empowerment of Women. Before the announcement of a women’s bank, it had restructured Rashtriya Mahila Kosh (the national credit fund for women) into a non-banking finance company with an enhanced corpus of Rs 500 crore. This will financially help 200,000 economically backward women.

Analysts, however, disagree that political parties are making serious efforts to empower women. Anupama Roy of Centre of Political Studies, JNU, says just economic empowerment will not help women emerge as a political constituency. “There needs to be changes in social policies,” she adds. Ayesha Kidwai, a social activist and professor at JNU, stresses on reservation in all political spheres to empower women.

Rajeshwari Deshpande, who teaches political science at University of Pune, says, “The new politics of gender does not encourage political participation of women. It keeps women’s issues confined to sporadic protests and creates an impression of the consolidation of a woman constituency.” She says such politics emboldens the likes of religious leader Asaram Bapu and chief of Rashtriya Swayamsevak Sangh Mohan Bhagwat to disregard women and their interests.

Whether empowered or not, political parties are striving to gain the upper hand on women to be in power. Just a month before the budget, the Congress at its Chintan Shivir coined a slogan: “Pehle mahila ka samman, phir Bharat Nirman” (first respect women, then build the nation). Bharat Nirman is a flagship programme of the government. The slogan set the tone for the budget. The party dissected its aam admi agenda for effective management of different constituencies, particularly women.