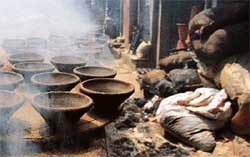 The question whether in situ housing improvements should be made in slums, or slum-dwellers should be relocated, is an old one. It is also fraught with politics and controversy (see 'No more slumming', Down To Earth, March 15, 2006). In a recent study supported by the World Bank, Akie Akekuchi, Maureen Cropper and Antonio Bento -- all from the University of Maryland at College Park, where the latter two are professors -- take a new look at the choice. The study does not reflect the bank's opinions, but is important because it presents a new way to value benefits from slum 'redevelopment' programmes. The study is also important because it lays a price on two important attributes of slums that are typically ignored in policy circles: the value of being located close to one's work place, and, the value of 'living amongst one's own people'.

The authors examine the question from the perspective of Mumbai's slum dwellers. They use data on a random sample of 5,000 households in the Greater Mumbai Region (gmr), and work on what is called a 'hedonic' model in economics. Simply defined, this model imputes a value to 'quality'; it represents a useful way to understand the utility of goods and is used to measure 'compensating differentials'. For instance, the model would answer the following question: What should one pay people who have been asked to do something unpleasant, so that they are ' as happy as before' ?

Slums represent an urban environmental 'problem' because of their substandard housing and sanitation facilities. The spillovers from such sub-standard amenities and pilferage that ensue for the rest of the city, has made policy-makers think of other options. An often-used option is to relocate slum-dwellers to new locations, with better housing and infrastructure. However, this solution does not consider the effect of relocation on costs of commuting to work. The other solution is to upgrade housing within slums by providing better infrastructure such as piped water and sewage connections. Both types of programmes have been pursued in Mumbai. In 1985, the World Bank's Bombay Urban Development Project aimed to provide tenure security to slum dwellers. In the same year, the Prime Minister's Grant Project, introduced by the Maharashtra government proposed new housing units in Dharavi. And currently, the Valmiki Ambedkar Awas Yojana Programme provides loans to build or upgrade houses.

But which are the ones favoured by slum dwellers? Data collected for the World Bank study offers some clues. For its respondents, commuting distances are an important determinant of housing decisions. Slum dwellers in the Greater Mumbai Region (gmr) live only 3.9 km from their employment locations. Other residents of gmr with a higher income, in contrast, are likely to live much further away from their employment locations. The survey confirms the well-known sociological theory: people of the same religion and language tend to flock together in slums. Thus on an average, in gmr, a Muslim household prefers a locality, where Muslims are 35 per cent of the population. Similarly, Gujaratis in an area favour a neighbourhood that is 26 per cent Gujarati.

The study measures the 'disutility' or the cost of relocating inhabitants in terms of monetary values. It finds:

As expected, the study finds that commuting costs are important. It notes that a household with a monthly salary of Rs 6,250 would give up Rs 330 per month to reduce the main wage earner's commute by 1 km, if he/she were to keep the same job. If, however, the main wage earner were to change jobs, the household is willing to give up a little less: Rs 283.

Finally, neighbourhood attributes matter. The exact value of being with families, who speak the same mother tongue and have the same religion, depends on whether one belongs to the religious (and linguistic), majority or minority group, in the area. So, residents who are a linguistic minority only 5-10 per cent of the population speak their language in a locality -- would pay Rs 162 for a 1 per cent increase in residents of their 'kind'. But residents, who are in majority in a locality, would pay much lesser -- only Rs 15 -- for a 1 per cent increase in kindred spirits. Similar results hold for religion. The findings are significant, given the importance of migrant population to Mumbai's economy


Although the study lays a 'price' on amenities, it emphasises that there is no one-size-fits-all solution to the upgrade versus relocation choice. Benefits and costs must be evaluated on a case-by-case basis, and importantly, must consider employment effects and attributes of neighbours. To illustrate this, the authors compare stylised version of these two programmes for two slums located in Zone 5 of gmr.

The two sections, Section 79 and Section 80 -- poorer than the rest of the sample -- are located within one mile (about 1.6 km) of Harbour Railway, have electricity, and have houses with approximately 14 square metre of area. Almost none of the houses (or shacks) have good roofs and a quarter have piped water connections. The primary earner in both slums, commute 5 km on average (a much larger commute than the average for the larger sample). Majority households in Section 79 are Marathi-speaking Hindus and in Section 80, most speak Hindi -- 60 per cent of them Hindus and about 30 per cent, Muslims.

The results are preliminary and are subject to many caveats but Akekuchi, Cropper and Bento present an important way to clear the haze surrounding slum relocation. If there is truly to be an effort to evaluate and understand the benefits and costs of relocation programmes, so that the one group of people, who should really matter more than any one else -- the slum dwellers -- remain at least as happy, then policy- makers must take heed.