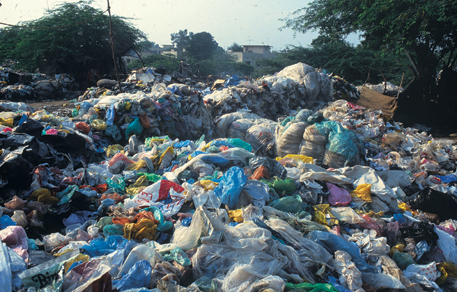 A recently published World Bank report has expressed alarm over the growing piles of municipal garbage across cities of the world and their disposal, which are a source of greenhouse gas (GHG) emissions. The report states that in a little over a decade, the global municipal solid waste generation will increase by 70 per cent—from the current 1.3 billion tonnes per year to 2.2 billion tonnes in 2025. What's more, the annual cost of solid waste management is projected to rise from the current $205 billion to $375 billion, with cost increasing the most in low-income countries.

The report suggests much of the increase in garbage generation will be on account of rapidly growing cities in developing countries. The report also has a whole section on how the available data on municipal solid waste (MSW) is incomplete and raises concern over the current waste disposal methods.

The report also spells out policy recommendations for reducing greenhouse gas emissions, some of which emanate from inefficient solid waste management practices. It says post-consumer waste is estimated to account for almost 5 per cent of total global greenhouse gas (GHG) emissions, while methane from landfills accounts for 12 per cent of total global methane emissions. Methane emissions in India from municipal waste disposal, as of 2006, is 16 million tonnes CO2 equivalent (CO2e), while its GHG emissions are 1,210 tonnes CO2e. The report suggests that GHG emissions from waste management can be reduced and cites the example of the European Union where 69 million tonnes of CO2e annual emissions in 1990 were brought down to 32 million tonnes per year in 2007.

Released on June 6, the report, titled What a Waste: A Global Review of Solid Waste Management, suggests that this lack of data is one of the main reasons for absence of policy and improper disposal of waste. “Data is often inconsistent, incomparable and incomplete..., but broadly, the available data has been analysed and studied, in order for decision makers to prepare plans and budgets for solid waste management in the coming years,” says the report.

Of the total 171 countries, almost 40 have been excluded due to lack of data. But even the countries included have incomplete and very old data. Of the 171 countries, 61, including India, have no data on municipal solid waste collection and disposal. In some instances, the data was last collected more than 15 years ago—it was 1998 for Botswana, 1996 for Israel, 1998 for Maldives and 2005 for India.

The report states: “reliable global MSW information is either not available or incomplete, inconsistent, and incomparable”. The report points at  estimates being made without basis and dates and methodologies or source of data not being indicated in country reports.

The report says the increase in solid waste generation is like a “silent problem, growing daily,” with little or no action from the concerned authorities. The authors of the report say an integrated solid waste management plan is needed in cities to approach solid waste management in a comprehensive manner. The key to such a plan is consultation and input from all stakeholders, including citizens groups and those working on behalf of the poor and the disadvantaged.

This is one of the first reports of its kind, offering country-wise and region-wise consolidated data on garbage generation, collection, composition, and disposal. The report says the amount of municipal solid waste is growing fastest in China (which surpassed the US as the world’s largest waste generator in 2004), other parts of Asia and eastern Europe. China generates 70 per cent of the trash in the East Asia-Pacific region.

Environmentalist and member of the Supreme Court committee on municipal solid waste, Almitra Patel, agrees that comprehensive data on garbage is not available in India. But she cautions against using this as an explanation for the poor management of waste in the country. Patel says that the Municipal Solid Waste Rules of 2000 do spell out a thorough procedure and need for proper data collection—urban local bodies (ULBs) are required to submit detailed reports of waste collected and disposed annually to the state pollution control boards (SPCBs) by June each year. SPCBs, in turn, are required to submit consolidated reports to the Central Pollution Control Board (CPCB) by September-end, and CPCB is required to submit these reports, with its suggestions on action to improve waste disposal and management, to the Ministry of Environment and Forests (MoEF) by December.

“I believe that to have proper disposal and management of municipal waste, more than just data collection is required,” says Patel. She adds in her report to the apex court, she submitted documents on the annual review report of CPCB for the year 2008-09, which showed “extremely poor compliance or non-compliance” by ULBs with regard to data collection submissions.

The CPCB report shows only 10 out of 34—29 per cent—SPCBs and pollution control committees (PCCs) filed their reports in time by September 2009, and even by April 30, 2010, only 17 of them (50 per cent) filed their reports. Internal annexure 1 of the CPCB report shows that state pollution control boards and PCCs of Union Territories reported data on only 2,757 ULBs (63 per cent of total 4,378). So, the annual review report is an imperfect snapshot of national reality, which would probably be worse if fully reported.

CPCB’s review report shows that some progress has been made in identifying sites for waste management in 780 of the country's total 4,378 ULBs (18 per cent), ten years after the MSW Rules were notified. Only 1,899 ULBs (43 per cent) have authorisation (applied and received permission) to set up waste processing and disposal facilities.

Patel adds, “even an otherwise progressive state like Tamil Nadu reported 99.64 per cent open-dumping in 841 out of its total 844 municipalities. In ten years, as per all-India compilation in internal CPCB report, only 1 per cent (53 ULBs) have actually set up composting facilities, while another 1 percent (52 ULBs) are still planned.” An additional 5 per cent (229 ULBs) have set up small vermi-composting facilities, mainly in Goa and Gujarat, while another 3 per cent (157 ULBs) are planned, mainly in Gujarat and West Bengal.

Twelve years after the solid waste management rules came into force and a 2003 deadline, 4,097 out of 4,378 ULBs (94 per cent) are still dumping their untreated garbage in the open. “Rainwater percolation through old and current waste-heaps pollutes nearby water sources and supports fires, which are often continuous. It is exactly this universal end-point neglect of waste that drove the petitioners to file a petition in1996. It is inexcusable that this situation should persist after so much information and money and time has been made available for compliance.”

Patel explains this is because the government and the Environment Protection Act (EPA) does not prescribe penalties for delay or default in either reporting or compliance with MSW Rules, nor any bonus or  incentive for early compliance. Enormous effort and unproductive time is spent on reminding, cajoling, bullying ULBs, SPCBs and PCCs to file their statutory reports by the stipulated date, she adds.

Bharti Chaturvedi, director of non-profit Chintan which works with waste pickers and on waste management in Delhi, had assisted in preparing a similar report—the UN Habitat Report of 2010. She says similar problems of poor data availability was faced while preparing the UN report. "If there was proper data there would be definitive action and policy changes that could be made," she says. Chaturvedi says since there is no proper data collection it is not known how much waste is removed by waste-pickers for recycling. This, according to her, is one of the main reasons that the importance of waste pickers and their contribution to reduction of municipal waste is not taken into account at the policy making level.

“If we had compelling data then we could even have a definitive form of extended producer responsibility even for the plastic industry. The data would give us an estimate of the costs required to remove the plastic from the municipal waste stream for recycling or proper disposal,” she adds. Another aspect impacted by the lack of proper data, Chaturvedi says, is the technology used for the treatment and disposal of waste. "If we know how much silt constitutes the municipal solid waste, we could ensure technology suited for that. The figures we have are at best rough estimates."