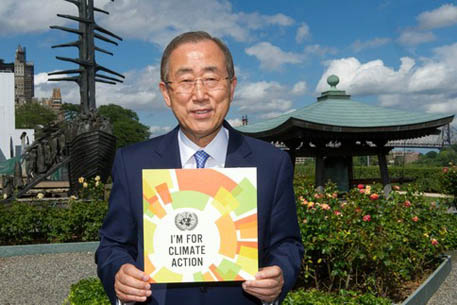 To inject momentum into efforts to reach a global deal on curbing greenhouse gas emissions by the end of 2015, the UN General Secretary Ban Ki-moon has convened a high-level meeting of world leaders, business leaders and civil society activists in New York City. This is the first time world leaders will come together on the issue since the landmark Copenhagen summit in 2009, which was seen as a fiasco, and perhaps the last time before the 2015 climate change deal is sealed in Paris.

At this one-day Summit on September 23, there will be no official negotiations or political trade-offs. Ban Ki-moon has requested the world leader to use the stage to deliver “bold pledges” on how they intend to tackle climate change. The draft of their pledges will be reviewed by March 2015, before being finally presented at the Paris conference where they will be subject to tough and intense negotiations.

Some doubt the effectiveness of the summit. The Chinese President and Indian Prime Minister have already announced that they will not attend the summit. The two countries play a major role in global talks on climate change. Environment was a major part in the political agenda of the Modi government. It remains to be seen who will attend the summit in his stead.

Angela Merkel of Germany has also announced that she will not attend the summit. This has triggered speculations about the country’s commitment to cut a significant amount of greenhouse gases and its pledge to divert US $1 billion towards the Green Climate Fund (GCF).

Civil society groups plan use the opportunity and mount pressure on the world leader to take action on global warming. Various non-profits will host a plethora of events at New York City, hold marches and peaceful demonstrations, expressing the anguish over the stalemate of climate negotiations over the years.

Expectations for a new climate agreement

Building flexibility and ambition into a 2015 climate agreement