World Hepatitis Day: Who can pay for hepatitis C treatment?

Selling price of HCV drugs far higher than production cost, all because of pro-industry patent regime

On occasion of World Hepatitis Day on July 28, the World Health Organization (WHO) and its alliance partners have called on governments, civil society and people in the health sector to “think again” about the largely ignored “silent killer”, called so because its symptoms often go unnoticed for years.

Viral hepatitis – a group of infectious diseases known as hepatitis A, B, C, D, and E – affects hundreds of millions of people worldwide, causing acute and chronic liver disease and killing close to 1.4 million people every year.

Of these, hepatitis C or HCV is emerging as an epidemic in developing countries. It is spread primarily by blood-to-blood contact, through infected syringes and unsafe sex.

India is one of the worst affected, second only after China. According to WHO, India is home to 12 million chronically infected patients. The cost of treatment, which is estimated to be $6000 or INR 3,75,000 for treatment course of two to four years, is out of bounds for most patients.

But does the cost need to be so high? Apparently not, especially in light of new generation of drugs available in countries like United States and Egypt. But the patent regime and interests of pharamecutical companies don't let the prices to come down for Indian patients, even though productions costs are very low.

The new drugs can cure 90 per cent of people with HCV within 12 weeks, says a paper by Andrew Hill of Department of Pharmacology and Therapeutics, University of Liverpool, the UK. However, these new generation drugs cost $84,000 (sofosbuvir) and $66,000 (simeprevir) per person for 12-week course in the US. The production cost for the same is as low as $68–$136 for sofosbuvir and $130–$270 for simeprevir. The high costs are explained by patents held by their researchers which are not letting generic drug industry to produce them for consumption for the poor. 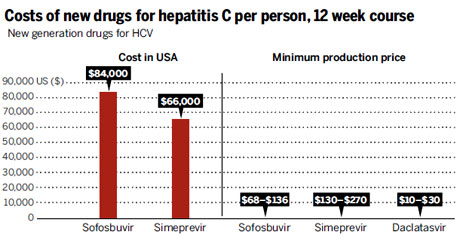 Efforts have begun to lower the cost. For example, sofosbuvir, manufactured by American biotechnology company Gilead Sciences, is available in Egypt for $1000. But this too is much higher than the production cost. Also, as sofosbuvir is part of a combination drug therapy, unless prices of other drugs, that are part of the combination come down, the regimen will be unaffordable to patients.

For instance, patent for simeprevir will lapse only in 2026. In a particular course, for which clinical trials have produced high success rate, it has to be combined with sofosbuvir. Thus, unless the cost for simeprevir, developed by Medivir and Johnson & Johnson's pharmaceutical division, Janssen Pharmaceutica, is lowered, the combination as a whole won't cost less.

The story is akin to that of HIV-AIDS treatment nearly 15 years ago. The combination drug therapy for treating AIDS, that went on to be known as anti-retroviral therapy (ART), cost a bomb till the patent was held by multinationals. But an Indian pharmaceutical company, Cipla, made use of the then existing Indian patent law to bring the costs down. From 1972 until 2005, Indian law allowed no end product patents on drugs, meaning pharmaceutical patents were allowed only on the manufacturing processes used to produce drugs, not on the end products themselves. This could break the monopoly enjoyed by pharmaceutical companies in certain other countries. Cipla reverse engineered AIDS drugs and offered ART at $350 a year for one person. It cost $10,000 otherwise.

Activists are demanding similar measures for HCV now. But the battle is tougher. In 2005, under the TRIPS agreement, India's patent law was changed and patenting of end products was added. But the option of compulsory licensing still exists. Indian government can allow a company to manufacture drugs after payment of a royalty. Cheaper drugs will further increase their demand which will help bring the costs even lower.

"We have learnt through HIV treatment that scale up is only possible if treatment is simple and affordable. Access to new oral drugs, direct acting antivirals (DAAs), will play a key role in developing a public health response to Hepatitis C treatment. Government should make generic production of DAAs a national priority," said Shailly Gupta of Médecins Sans Frontières (MSF), an international humanitarian organisation, fighting for lowering price of HCV treatment among other things.

Prevalence of HIV, Hepatitis B, Hepatitis C and Syphilis in donor’s blood: A study from eastern part of India