World “on track” for a climate change deal by 2015 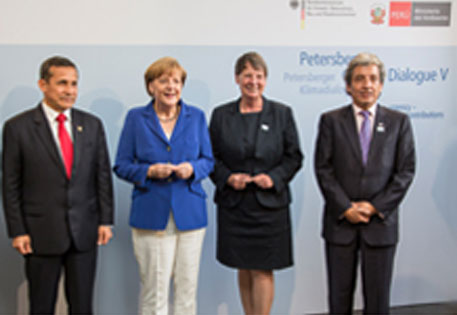 German environment minister Barbara Hendricks believes the world is on track to sign an international climate change deal next year. Hendricks, while speaking at the concluding day of the Petersberg Climate Dialogue in Berlin, on Tuesday, said, “It became clear that we are on the right track and that ideas about the 2015 agreement are converging. However, there are still different opinions on the agreement’s internationally binding character, the degree of regulation and its level of ambition.”

She added that the UN conference in Lima this December could offer a forum to resolve the outstanding the issues. The two day conference was co-chaired by Germany and Peru.

Meanwhile, German Chancellor Angela Merkel and the Peruvian President Ollanta Humala, during the two-day conference, called on countries to forge a legally binding agreement on emissions reduction by 2015.

Even China, at the conference, hinted at announcing major goals next year to check their carbon dioxide emissions by 2020. China is the largest user of fossil fuels.

Hendricks said major emitters, including the US, the EU and China, would observe the March 2015 deadline, allowing smaller countries to follow in their footsteps. At the UN climate change conference in Warsaw in December 2013, countries had agreed to a deadline of March 2015 to present their national climate action contributions to a new agreement set to begin in 2020.

“Before the 2015 Climate Change Conference in Paris, we must make sure that the effort is shared equitably and that the actions proposed are sufficient to limit the temperature increase to below two degrees. By 2030 we aim to reduce our greenhouse gas emissions by 55 per cent compared to 1990 levels and are thus setting a good example,” Hendricks said.