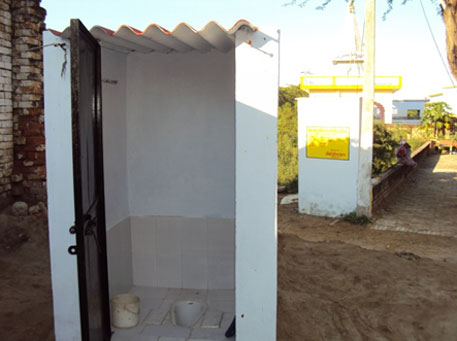 On the occasion of World Toilet Day on November 19, all eyes are on how India is attempting to eradicate open defecation by providing its citizens with access to toilets. The new government, led by Prime Minister Narendra Modi, has been reinforcing its political commitment to the cause, creating widespread hope.

Experts say that this is the first time in independent India that “sanitation” has become a political issue. When Modi was the chief minister of Gujarat, he raked up the sanitation issue and took a dig at the then UPA government for failing to provide toilets. He famously said that a toilet is more important than a temple. After being sworn in as the prime minister of India on May 26 this year, he made universal toilet coverage the government’s prominent agenda. He also repeated his promises in his Independence Day speech.

On October 2 this year, Modi launched “Swachh Bharat Mission” (SBM) and set October 2, 2019 as the deadline for achieving universal sanitation coverage. It was known as “Nirmal Bharat Abhiyan” (NBA) under the previous government.

The government announced it would spend Rs 1.32 lakh crore in the next five years, almost three times more than what the previous government had planned. It also advanced the target year, from 2022 to 2019. But key challenges remain. These include generating demand for toilets at the grassroots and developing time-bound mechanisms to fulfill it.

“The issue has become more political than social,” says Bindeshwari Pathak, founder director of Sulabh International, a non-profit involved in the construction of community toilets. “Senior officials are working hard to devise ways to expedite this mission and allocate huge funds,” he adds. Pathak was one of the consultants in the planning process for this mission.

The political commitment is clearly visible. During the election campaigns in Maharashtra and Haryana, party workers rallied for cleanliness in different parts of the state. The poll-bound states of Jammu and Kashmir, Jharkhand and Delhi are also witnessing similar scenes. Ministries and government agencies are regularly organising cleanliness drives across the country. Popular film stars have been roped in for aggressive media campaigning. News media carry regular reports of party leaders and state government officials participating in cleanliness drives.

The new target seems to have taken a cue from the 100 days target, with the government deciding to construct one toilet every two seconds to achieve universal toilet coverage in next five years.

The government has decided to delink sanitation from the flagship programme, Mahatma Gandhi National Rural Employment Guarantee Act. It pointed out that the process of constructing toilets slowed down under MGNREGA.

According to official data, from 2006-07 to 2010-11, nearly ten million toilets were constructed every year across the country under the Total Sanitation Campaign (TSC). When TSC was restructured and renamed as Nirmal Bharat Abhiyan in 2011-12 and the construction of toilets was linked with MGNREGA, the speed of construction slowed down by almost half.

Besides, these toilets are defunct and are reportedly being used as store rooms. They are also said to be of poor quality because of low subsidies. Under Nirmal Bharat Abhiyan, the government had provided a cash subsidy of Rs 4,600 (Rs 3,200 from the Centre and Rs 1,400 from the state) and another Rs 5,400 under MGNREGA.

Officials say the speed of construction slowed down because of the lack of coordination between the two ministries implementing the scheme.

Finance for the scheme

The Union Rural Development Ministry said, in its press release, that it has planned to spend Rs 1.32 lakh crore for the construction of around 111 million toilets in the country in five years. The previous government had planned to spend Rs 37,000 crore from 2012-17.

The ministry has included 20 million toilets built since 2011-12 in the new target. It is silent on how it will procure funds for this programme. Experts say that in a bid to fulfill targets, the government may cut the budgets of other social programmes.

In addition to the subsidy of Rs 10,000, it will give an additional Rs 2,000 for a water storage tank for washing hands.

Implementing this scheme is a daunting task. On paper, this is a demand-driven scheme, but on the ground, it is supply-driven. Also, as sanitation is a state subject, the Centre has limited control.

The scheme hadn’t taken off since its launch because the government didn’t have enough funds to build toilets in case of a rise in demand.
Another stumbling block is the absorption capacity of poor states. Weak local governance is unable to raise awareness and create demand in states like Bihar, Uttar Pradesh, Madhya Pradesh, Chhattisgarh, Jharkhand and Odisha. The performance of these states is so poor that they are ranked lowest in the list of states with improved sanitation. These states are also the most populous and poverty-stricken in the country.

The decision of constructing toilets is taken at the district level according to the funds available. These funds are further arbitrarily allocated at the block and panchayat levels.
“Earlier, it was merely a toilet construction programme. Information, education and communication were not emphasised enough to generated demand. Now, the government is prepared for it,” says Sujoy Majumdar, director in the Ministry of Drinking Water and Sanitation.