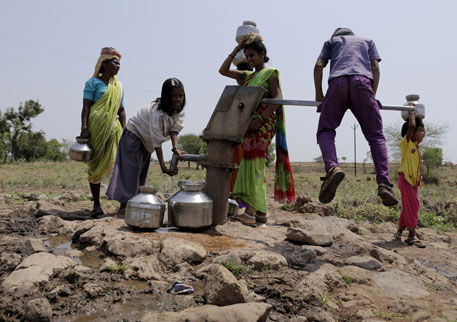 A study conducted by the University of California, Irvine, indicates that about a third of all major groundwater basins on Earth are under stress due to unsustainable human consumption.

Of 37 major aquifer systems studied, 21 have surpassed sustainability tipping points of depletion. Thirteen of these are significantly stressed as their groundwater levels are falling, but they are receiving little or no recharge.

The research was conducted based on data collected from NASA’s Gravity Recovery and Climate Experiment (GRACE) satellites between 2003 and 2013. The study was published in the journal Water Resources Research.

Groundwater aquifers are typically located underground, in soils or deeper layers of rock. The depth and thickness of these aquifers make it economically unviable to drill through and study them.

The team of researchers, hence, used renewable groundwater stress (RGS)—the proportion of groundwater usage to availability—to conclude that significant portions of the world’s population are consuming groundwater at a fast pace without knowing when the basins might run dry.

Depending on the RGS ratio, 37 of the largest global aquifer systems have been classified under four categories—unstressed, variable stress, human-dominated variable stress and overstressed. Groundwater basins have been evaluated as positive (gaining) or negative (depleting) in terms of both usage and availability.

Dry areas, where populations depend heavily on groundwater sources, were found to have the most overburdened aquifer systems. The Arabian aquifer system, which supports over 60 million people, is the most overstressed system in the world, according to researchers.

In the Indian subcontinent, where water security is already becoming an acute problem, the Indus basin aquifer of northwest India and Pakistan has been deemed the second most overstressed basin. The Murzuk-Djado basin in northern Africa is listed as the third. 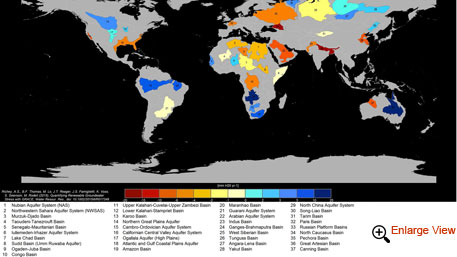 In an accompanying study, also published in Water Resources Research, researchers have highlighted that the total reserves of usable groundwater remain poorly known and that actual groundwater volume is likely far less than earlier estimates. The study has noted that depletion of groundwater is leading to substantial ecological damage in the form of declining water and land quality and depleting rivers. The authors have also stressed on the possibility of socio-economic and political disturbances and conflicts that may arise out of water stress.