World’s tigers should be classified into two species only, says study 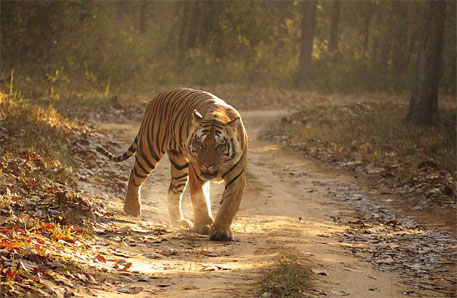 A study, published on June 26 in the journal Science Advances, says that tigers should be classified into two subspecies only, instead of the nine known ones.

The study is a collaborated project by scientists from the German Leibniz Institute for Zoo and Wildlife (IZW), National Museum of Scotland, Selandia College and Natural Museum of Denmark. It shows concern regarding the existence of less than 4,000 tigers, a historically low number and appeals for a new management for conservation.

The research highlights that there are limited resources for conservation and currently, a lot of these resources are being wasted in the hope of perpetuating subspecies, for which there is no scientific basis.

“Classification of tigers into too many subspecies reduces the scope of action for breeding or rehabilitation programs,” explained Andreas Wilting, the lead author.

The research is based on the information received by analysing DNA from mitochondria, a cell organelle. Skull measurements and hair details were included to understand variations between different subspecies. And finally historical records were included to study nine known tiger subspecies of which, the researchers could recognise only two.

The study confirms the existence of the Sunda tiger (Sumatra, Java and Bali) and Continental tiger subspecies. In contrast with this study, tigers around the world are classified according to the regions where they are found. Cambodia, China, India, Indonesia, Laos, Malaysia, Myanmar, Russia and Thailand are the tiger domains around the world.

"To ensure that we capture the variation of all modern tigers, we have included all the nine known subspecies, even though three of them are already extinct,” said Andreas Wilting, during a conversation with Down To Earth.

“Today, tigers of the Sunda Islands only exist on the island of Sumatra in the wild,” he said, adding that the rest of the tigers fall under the continental subspecies found in the mainland of Asia.

The Bengal, Caspian, Indo Chinese, South Chinese, Malayan and Amur tigers fall under the subspecies of Continental tigers. “All these six subspecies, including the extinct Caspian tiger, have large similarities between them; therefore we have put them in one single subspecies,” said the author.

The Siberian, Bengal, Indo Chinese, Sumatran, South Chinese and Malayan tigers are the existing subspecies identified by International Union for Conservation of Nature that further implies the extinction of three tiger species. Each of the existing tigers has been classified from being endangered to critically endangered.

The first ecological study of tigers was conducted in the 1960s and their shrinking population shocked the world. A collaboration of members, experts and NGOs from 160 countries, IUCN, proposed an international effort to save tigers. World Wide Fund for Nature (WWF), an international NGO responded with its first global programme “Operation Tiger” in 1972. WWF now aims to double tigers by the year 2022. Their “Tiger Alive” initiative involves extensive monitoring and evaluation, targeting zero poaching.

India's Project Tiger has managed to bring the tiger numbers from 1,411 in the year 2006 to 2226 in 2014. The US-based not-for-profit, World Conservation Society (WCS) works with the countries having tiger hotspots by providing technical and financial support, further helping them in building protected areas.

These organisations are funded by several government grants, corporate and individual contributions from around the world. According to the 2014 expense data, WWF spent $224,462,191 on their conservation programmes. The expenditure for India's Project Tiger, a government initiative, went from Rs 163.87 crore in 2012-13 to Rs 169.48 crore in 2013-14.