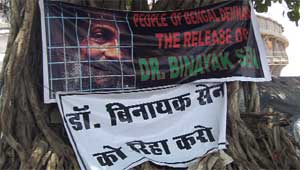 Agitation for his release gathers steam

ON MAY 4, the Supreme Court issued notice to the Chhattisgarh government seeking its response in two weeks to the petition of Binayak Sen, vice-president of the People's Union for Civil Liberties, challenging his detention in May 2007 under the Unlawful Activities (Prevention) Act and seeking his release on bail.

In the capital Raipur, for the past eight weeks a satyagraha is organized every Monday demanding Sen's release. Sen is a public health specialist and a civil rights activist. Civil rights organizations and support groups are participating in the agitation. More than 700 people have courted arrest so far.

D Thankappan, vice president of New Trade Union Initiative, a national federation of independent trade unions, which has initiated the agitation and is coordinating it, said, "The agitation has received attention the world over.There is a lot of anger about the government's stand which does not respect the democratic rights of civil rights activists and movements."

The agitation has the support of various national and international forums, including Amnesty International. Lord Meghnad Desai of the London School of Economics has urged the Indian government to withdraw charges against Sen.

Medical journal Lancet too has published a scathing editorial on the deteriorating judicial system of India. The agitation also has the support of the poor people in the state with whom Sen has worked for several decades.