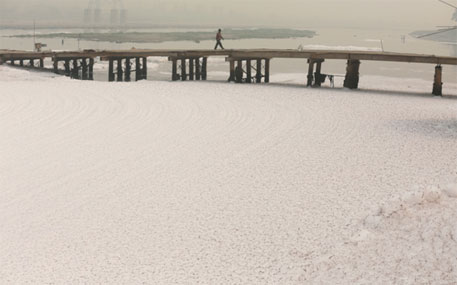 The National Green Tribunal (NGT) has announced that people throwing waste into the Yamuna will now have to pay a penalty of Rs 5,000-50,000. An NGT bench, chaired by Justice Swatenter Kumar, was hearing an application filed by Manoj Mishra and Madhu Bhaduri for saving the Yamuna. The judgment is called the “Maili se Nirmal Yamuna project 2017”.

According to the judgment, people spotted throwing waste into the river will be fined Rs 5,000. A separate fine of Rs 50,000 will be levied on those who dump construction debris.

In the judgment, NGT has asked polluting industries to contribute to the construction of a central effluent treatment plant (CETP) if the authorities fall short of finances. It has also directed the Delhi Jal Board (DJB) to increase the number of sewage treatment plants (STPs) and upgrade the existing ones to make them completely functional. Currently, the city’s 34 STPs, designed to treat 2,700 MLD (million litres per day), work at only 57 per cent of their installed capacity.

“DJB is completely responsible for not checking the flow of sewage into the drains,” says Bhaduri. “Only 50 per cent of the city is sewered. Raw sewage flows freely into the storm water drains.”

The tribunal has asked DJB to make 23 STPs functional by 2015 and add 32 STPs on major and minor drains at locations recommended by the NGT-appointed expert committee. It has asked for storm water drains to be kept free of encroachment and pollution.

DJB released its ambitious draft Sewerage Master Plan for Delhi 2031 which will connect the entire city to a sewage system. But the plan does not explain how DJB will ensure that STPs run at full capacity.

The order calls for demolition of structures built on flood plains and adds that the tribunal’s expert committee will decide about structures of historical, mythological and heritage importance. The tribunal has also banned agriculture in the flood plains, but has allowed restricted floriculture and silviculture.

The tribunal said that since 1994, the Supreme Court has passed several orders in response to public interest litigations for saving the river, but nothing concrete has been achieved for conservation of the Yamuna so far. The apex court was completely dissatisfied with measures taken by the departments responsible.

In 2012, it was observed that levels of Biological Oxygen Demand (BOD) and Total Colliform measured at Nizamuddin Bridge, Kalindi Kunj, Okhla and Palwal monitoring stations in Delhi were much above the permissible limits. The BOD level at Nizamuddin Bridge was almost 12 times the permissible limit of 3 mg/litre prescribed by Central Pollution Control Board. The total colliform was almost 3 million times higher.


A CSE analysis shows that by 2005, around Rs 1,500 crore had already been spent to clean the Yamuna. The same year, another Rs 624 crore were sanctioned for Yamuna Action Plan II (YAP II), of which Rs 380 crore were sanctioned for Delhi. The environment ministry recently sanctioned Rs 1,656 crore for YAP III. But both YAP I and YAP II have failed to improve the quality of the river. Data from Central Pollution Control Board shows that pollution levels of the river have worsened not only in Delhi, but also in other stretches of the river.

In all cities along the Yamuna, money invested under YAP or other infrastructure projects has been spent on construction works such as laying of sewers, installation of pumping stations and construction of sewage treatment plants. It is felt that there is a need to shift the focus from hardware-driven projects to a holistic plan for cleaning the river. The NGT order, if implemented correctly and efficiently, will definitely help clean the river, says Mishra. Advisors to the NGT, including Brij Gopal of the Centre for Inland Waters in South Asia, also welcomed the judgment.