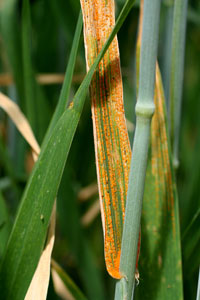 Agriculture departments in northern Indian states have been put on high alert following the appearance of yellow rust disease in wheat crops in parts of Ropar district in Punjab and Una district in Himachal Pradesh.

Yellow rust is a fungal disease which manifests as powdery yellow stripes on leaves. These stripes hinder photosynthesis, make the grains shrivel and stunt growth of the plant. It is a serious disease, which has been threatening wheat cultivation in the country the past few years. All the wheat growing states like Punjab, Haryana, Himachal Pradesh, the tarai region of Uttarkhand, Uttar Pradesh and the low lying areas of Jammu and Kashmir are susceptible to the disease. According to estimates, farms spread over 300,000 hectares were hit by yellow rust in 2011.

This time the disease has appeared in Patti and Dher villages of Ropar in Punjab and Sunehra village in Una district of Himachal, says an agriculture department official at Ropar.

Higher temperature combined with rains during wheat growing season aid the growth and spread of the disease, says Indu Sharma, head of the Directorate of Wheat Research, a body under the Indian Council for Agricultural Research (ICAR). Normally, December is marked by low temperature. But when the temperatures are high, between 3 to 4 degrees Celsius above normal, and accompanied by rain and fog, the environment becomes conducive for yellow rust. The impact of temperature and other factors is visible only in January. She adds that timely intervention had helped save around two million tonnes of wheat last year.

Sharma, who was in Ludhiana’s Punjab Agricultural University (PAU) on Wednesday to meet the university scientists and take stock of situation, says that wheat variety WH711 in Ropar has been affected by the disease in patches. She says a study by PAU scientists has revealed that the disease has come from hilly areas of Himachal Pradesh.

The disease spreads with the wind and started appearing in the present race (taxonomic group that is a division of a species) in 2001 because farmers in wheat growing states were not replacing their wheat varieties. When wheat varieties are grown in larger areas, they become prone to the disease, which is why it is recommended that seeds of wheat varieties should be replaced every three years. Another reason for increase in the plant disease is that farmers grow wheat varieties that are not recommended for their regions; as a result they either become susceptible or act as transporting agents.

“The disease is certainly going to spread to other areas, and that is why ICAR has alerted the state governments and their agricultural universities to help farmers monitor their fields,” says Sharma.

An official from the Uttar Pradesh agriculture department says officials in his department have been directed to visit the farmers’ fields with Krishi Vigyan Kendra (agricultural extension centres of ICAR) experts and university professors and keep a strict vigil on wheat crops.

Similar instructions have been given to officials in Punjab and Himachal Pradesh, too. “We have already told farmers that if they find a yellow powdery substance in the stripes on the leaves of their wheat crop, they should spray 200 ml of fungicide with 200 litres of water in one acre of wheat crop,” says the agriculture department official of Ropar. Farmers should spray the crop when the weather is clear when there is no rain, fog or dew.