The wild winds huff and puff, destroying all that comes in its way. But, does it have a hidden message to say? 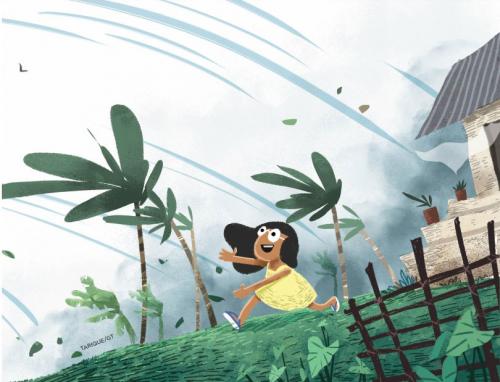 The morning after my birthday was very different. It was not because I had just turned 10 years old; but because it was a very dark morning and the thunder would not stop growling. I got up and lazily brushed my teeth while I walked over the dubori bon (leucus grass) in our front lawn. Grandma says nature has its own ways of taking care of us and if we walked over dew covered grass first thing in the morning, it will strengthen our eyesight. The moment mother got up, I followed her everywhere asking, “Is it time? Can I please go and put the comb and mirror out?” My mother turned a page over the calendar and said, “I think it is time!”

I woke up my brother and dragged him outside with me. It was time! It was time for Bordoisila, the fierce wind, to go home to visit her mother. I picture her flying across the paddy fields and her long hair entangled and flowing amidst the clouds. Maybe that is why every year we leave a mirror, a comb and a stool to sit on outside in the front porch for her to stop, look into the mirror, fix her hair and continue to fly home. Some say it is only a folk tale, but if so, what explains the timely wild winds at the onset of monsoon every year? I believed in Bordoisila.

When I was young and the season of storms began, I used to get really scared. But when Grandma told us that Bordoisila was just a young, married woman who was in a hurry to visit her mother’s place and because of which she destroys anything that comes her way, it changed the way I looked at the fierce winds and storms. She just wanted to reach her mother’s home sooner. And why not? Soon after these storms, comes the festival of Bihu, marking the onset of bohag, the spring season!

Soon enough, the wild winds came and left. We all travelled to grandma’s home to celebrate the festival of Bihu. Our morning started with the sweet calls of the cuckoo bird. Grandma gifted both me and my brother one kopow (orchid) each. The kopow was a kind that bloomed during spring, consisting of more than 100 pink-spotted white flowers. It is also an integral part of a Bihu dancer’s hair ornaments. Everywhere we looked small girls and boys draped in gold and red Muga silk attires were getting ready to perform the Bihu dance, in the backdrop of the brightest and freshest shades of green. 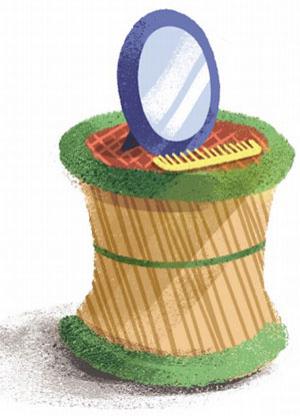 After a week of joyous celebrations, we said goodbye to Grandma with tears in our eyes. We did not want to leave. We reached halfway when suddenly the sky turned black. A fierce and strong wind changed the whole weather in seconds. There was thunder and we could see the flashes of lightning. Soon it started raining heavily. We couldn’t move further and parked by the roadside. Looking at our scared faces, mother said, “Don't be scared, this is just Bordoisila and she is returning from her mother’s home.” I asked, “But why is she so angry?”

Mother said that she is upset just like we were; to go back from her mother’s place. And this time she is bursting into tears along with the fierce winds, because of which it was pouring heavily. This marked the incoming monsoon season. It rained heavily for hours and the strong winds blew away dirt, plastic bottles and anything that came its way. Both my brother and I snuggled close to our mother and closed our eyes.

A year later, I am older and a lot wiser. At least that’s what I think, but my mother seems to disagree. It is the same time of the year Bordoisila came last year and so this time I am prepared in advance. I have already put out the mirror, comb and the stool. Now it is just a matter of time. Bordoisila would come and then soon after we would celebrate Bihu! Weeks pass by but there is no sign of Bordoisila. Everybody looks a little impatient and disappointed. But the farmers in the neighbourhood look very worried. Did it mean something was wrong? Did we upset Bordoisila in some way for which she didn’t come this year?

In the evening, I asked mother what was wrong. Where is Bordoisila? My mother heaved a sigh and explained, “Who knows where she is. These days, seasons have become untimely. It gets hotter and drier when it should rain and the cold season starts when it earlier used to end. What we should remember is when we do not respect nature, nature does not respect us. We can only wait and hope that Bordoisila comes, and brings the spring with her and when she leaves, she leaves behind the rains for us.”

A few weeks later, I suddenly woke up by the thumping sound of thunder. My heart skipped a beat but my happiness knew no bounds. I sprinted to the front lawn and felt the cool breeze. Though she was late, Bordoisila was finally coming home!