Traditional us history has it that when Christopher Columbus crash-landed into the Caribbean in 1491, people in the Americas lived so lightly on the land that the area was a vast wilderness. Archaeologists, anthropologists and historians have, over the last two decades, proved this assumption wrong. But there remains a hiatus between academic scholarship and popular imagination. It is not uncommon today to find advertisements celebrating the American Indian chasing bison. The idea of the 'ecologically pure Indian', more importantly, has implications for current ecological battles.A large section of the conservation movement has been animated--sometimes unconsciously--by the belief that the Americas in 1491 were nothing but tracts of Edenic wilderness before the pioneers set foot. The region was "untrammeled by man", according to the us Wilderness Act of 1964--one of the most influential environmental laws worldwide.

In this book under review, Charles C Mann deploys an impressive array of recent archeological work, neglected colonial accounts and his own observations to argue that the Americas were home to sophisticated agrarian civilisations centuries before it became the New World. People here lived in some of the world's biggest cities and were far from the indolent, ineffective savages of colonial stereotypes. The scope of his book is wide from the coast of Massachusetts to the heights of the Andes and the Amazon rainforest. The broad survey of two continents over nearly 20 millennia ranges across agriculture, government, warfare, economics and demographics.

A large part of the book is also science travelogue. Mann travels to large man-made mounds in northeastern Bolivia, he visits Incan remains in Peru and Chile, Mayan ruins in the jungles of Yucatan and the great plains of the us, ending his account at the mouth of the river Amazon, where he says there was once an American Indian city inhabited by 100,000 people. He visits scientists in their labs, archaeologists at their digs, historians in their studies and American Indian activists in their frustrations--to challenge stereotypes.

The great Inca city of Tenochtitlan in its heyday was larger than Paris and Tawantinsuyu on the shore of Lake Titicaca in the high Andes, a marvel of architecture. Mann's accounts also take us to lesser known, but once thriving, American Indian settlements of Plymouth, Illinois and St Louis. In fact, the first Europeans to visit the Americas were often more willing than their descendants to give credit where it was due. The conquistador-turned-priest Bartolome de Las Casas, for example, described indigenous America as an "enormous beehive of people".

The thriving urban culture was sustained by innovative agricultural practices. In the Andes, there were massive stone terraces for farming. In the Amazon River basin, the local people improved vast tracts of soil by adding charcoal and a fish fertiliser. They set fires to diminish underbrush, to encourage large, nut-bearing trees, and to open the land to berry bushes that sustained sizable deer herds.

The Indians, however, do not always appear as perfect stewards of nature in Mann's account. 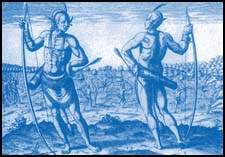 The Inca rulers of South America, for example, removed entire populations from their homelands, shuttled them around a huge road system that spawned much of the continent, and forced them to work with other groups on massive state farms--not a very sustainable practice.

Native Americans, in fact, were more than a match to European atrocities. But it was diseases, especially smallpox, which wiped out their population in parts of the Andes, Mexico, and the great us plains. Mann shows how pestilence ripped through the Americas with a speed brought into focus only now with new excavations and fresh analysis of colonial death records. In the aftermath of the decimation, bison herds, which were earlier assiduously regulated by the Indians, were propagated wildly, and forests took over Indian fruit groves and manioc plantations. The Wild West was, then, a product of the European conquest.

But Mann's account falters here. Romanticism, carefully eschewed through the entire account, takes over. Mann concludes with speculations directly linking American democracy to Indian precedents that supposedly dissolved European hierarchies. "Colonial societies could not become too oppressive, because their members were surrounded by direct examples of free," he writes rather naively.

That's a minor quibble, however. Mann has told an important story that has implications on how we look at history to wage ecological battles.