Coffee out of cafe 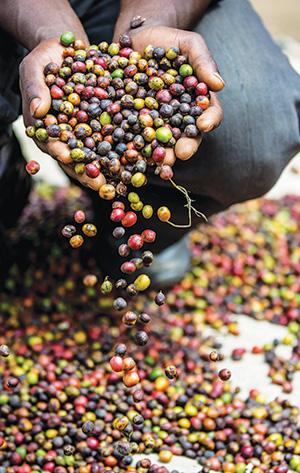 JEFF KOEHLER is an award-winning American food writer who has written books on the Mediterranean, the Iberian and Moroccan cuisines and one on Darjeeling tea. For his latest book, Where the Wild Coffee Grows, he travels to three continents to unravel the story of coffee. In doing so, he delves into subjects as disparate as history, geography, politics, economy, botany, agriculture, forestry and climate change and weaves a tale that is breathtaking in its scope and grandeur.

Koehler has written this book with certain goals in mind. The first is to dispel the damagingly false notion that coffee was an Arab discovery. Today, there is unassailable scientific evidence that wild coffee first grew in Africa. According to a 2007 paper, Towards a Phylogeny for Coffea, authored by a team of scientists, including Aaron P Davis of London’s Royal Botanical Gardens, whom Koehler quotes heavily, the genus Coffea “occurs naturally in tropical Africa, Madagascar, the Comoros and the Mascarenes (Mauritius and Reunion)”.

In Africa, coffee originated in the southwestern region of Kaffa in Ethiopia. Kaffa, a montane, heavily-forested area, has long been held to be the source of coffee. Kaffa—one of the suggested sources for the word “coffee”—was an erstwhile great African kingdom.

Here, coffee is so ingrained in the local culture that even toddlers sip the brew. Coffee trees grow in the wild in the cloud forests of Bonga, Mankira, Kombo, Gela and Boginda—all in Kaffa. There are numerous folklores about coffee in Kaffa. One of them is about Kaldi, a goatherd who “discovered” coffee after seeing his goats dancing energetically upon eating some strange crimson berries.

In anointing the Kafficho people as the discoverers of coffee, Koehler debunks earlier accounts of authors such as Alan Bennett Weinberg and Bonnie K Bealer. In their 2001 book, The World of Caffeine, they said that “no direct evidence has ever been found indicating where in Africa coffee grew or who among the natives might have used it as a stimulant or known about it there earlier than the seventeenth century”. At the same time, Koehler admits that there is no consensus as to how coffee spread across the world from Ethiopia.

Koehler devotes a large part of the book to the four threats that coffee is facing today—disease, poor genetic diversity, climate change and deforestation. As coffee leaf rust, a fungal disease, is destroying large swathes of plantations across the world, and climate change and deforestation threaten even worse consequences, he points to one solution: the cloud forests of Kaffa. This place, he says, could hold the answer to the challenges.

Koehler has many reasons to support his argument. Genetic diversity is highest at the point of origin or source. Kaffa’s forests are thus a rich storehouse from where new varieties can be bred, which may even take on the mighty coffee rust disease and also adapt to climate change. The key though, says Koehler, is to conserve such diverse hotspots. And for good reason. As the Ethiopian population swells, there is more pressure on forests.

Fortunately, there are some encouraging signs. For instance, Ethiopia, since 1991, implemented community-based forestry, giving communities a stake in the forests. In 2010, the United Nations Educational, Scientific and Cultural Organization declared the Kaffa forests a biosphere reserve, which has given it complete legal protection. Though it is a tad too long, Koehler’s book is a worthy addition to coffee literature.