Book>> The Energy Glut: The Politics of Fatness in an Overheating World • Ian Roberts with Phil Edwards, • Zed Books • £12

A few days ago, when I was wondering about the relentless pressure we face to be fit, feeling there had to be a scam somewhere, I happened upon a book that gave me an ‘aha’ moment.

Since long I have been noting that it is less and less possible to walk around safely on Delhi streets.

We have to wake up an hour earlier just to exercise: that is, walk around in a carfree zone with no other objective than to burn the extra calories we have consumed, or swim back and forth in a goldfish bowl, as it were, going nowhere at all.

How did moving come to be such an end in itself? Was there a connection between my dismal quest for fitness and the extrication of walks from city roads?

Yes, said Ian Roberts, there absolutely was. “Far from being a personal failing, obesity is a normal human response to a sick environment, the bodily consequence of living in a world flooded with cheap energy.

“As a result of petroleum- powered transportation and the road danger it creates, we walk and cycle less than ever before in the history of the world and our personal energy output has plummeted. However, at the same time we are surrounded by masses of cheap food energy,” he writes in The Energy Glut: The Politics of Fatness in an Overheating World. The ‘aha’ moment came when Roberts refused to join in the victim-blaming chorus, where not just the fashion fraternity but even the medical profession has begun to stigmatise fat people as having no self-control. 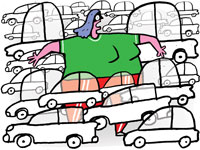 “The notion that fatness is all to do with greedy gluttons egged on by an insatiably profit-hungry food industry simply does not stand up to scrutiny. Whereas our fattening transportation infrastructure was built decades ago… we only woke up to the problem of fatness when large numbers of people started to crash through the obesity line… When it comes to fatness, scientists have been asking the wrong question (a focus on obesity rather than on average BMI), and have been using the wrong data (a focus on what’s happening now rather than what happened over the past half-century),” he writes. At the heart of Roberts’ argument is the motorisation of society.

This has created a class of sedentary motorists and a road environment that has become increasingly unsafe for pedestrians and cyclists. People started staying at home more, and pedestrians got a powerful incentive to go out on the road in cars instead.

Parents began driving their children to school, instead of letting them walk or cycle, and this has taken away their mobility. In the 1940s, says Roberts, “petroleum ignited an agricultural revolution that resulted in massively increased food yields”. He calls this nexus between agriculture and fossil fuel the “petro-nutritional complex”.

This has brought ever cheaper food with a high hidden cost: the desperate scramble for all the world’s oil (including costs of the shameful invasion of Iraq), drilling and refining, manmade inputs into the soil, mechanisation of farming, food processing, transport over vast distances, and supermarkets that encourage you to use your cars, by providing huge parking lots and even petrol pumps on site.

The markets encourage you to buy more food than you would have had you come on foot or by public transport. The transport lobby projected road building as the best intervention for rich countries in the developing world, when there is no evidence that more roads will do anything but cause more traffic fatalities. “The wealthy world needs Africa to build more roads so that Western car makers can remain profitable.

The market for cars in high-income countries is nearly saturated… To survive, the car industry must sell more cars, and to make sure that it can, poor countries must build roads to accommodate them. Getting impoverished nations to spend public money on road building requires some serious propaganda…

The most pervasive misinformation is that road building is good for development,” Roberts writes. We in Delhi were treated to a stunning display of the brute power of the car lobby a few years ago. When the Delhi government decided to build a Bus Rapid Transit (BRT) corridor on a section of road that many print journalists use to get to work, the uproar in the press was deafening, with one newspaper devoting as many as four pages a day on a campaign to get the work stopped.

Meanwhile, annual traffic fatalities on the BRT corridor fell sharply from 15 per year to none at all. Cyclists were segregated in their own lane, and pedestrians had an unobstructed path, with street lighting close to the ground. We could have safely gone and walked or cycled there, and burned our own body fat instead of petrol.

But the only thing that mattered was that cars had been deprived of a lane on each side of the road to create the bus lanes, and that was tantamount to heresy. In the end, the Delhi government blinked and further work on the corridor was suspended. The book’s second half shows ways in which we could claim back our homes and our neighbourhoods.

But the road back is not going to be easy. Indians, feeling freed of a long age of austerity, are all aglow with new four-wheeled possessions. Every step we take towards motorised society is a step we will see ourselves painfully undoing in years to come. We may stop this doomed journey much before our peers abroad do, but for the moment, it is going to continue.

Roberts sees this, and ends his book on a note of anger. “Despite their simplicity and scientific base, arguments in this book are unlikely to be given air to breathe in our daily political discourse. This book has claimed that fatness is a political problem, that petrol and not food is making us fat, that ‘traffic accidents’ are state-sanctioned violence…

“Without the confusion provided by a relentless drizzle of lies, car and oil companies could never have created such a colourful rainbow of delusion from a brutal machine and a barrel of oil,” he writes.

Peggy Mohan writes on language, education and social change. She lives in Delhi and walks at least 4 km a day