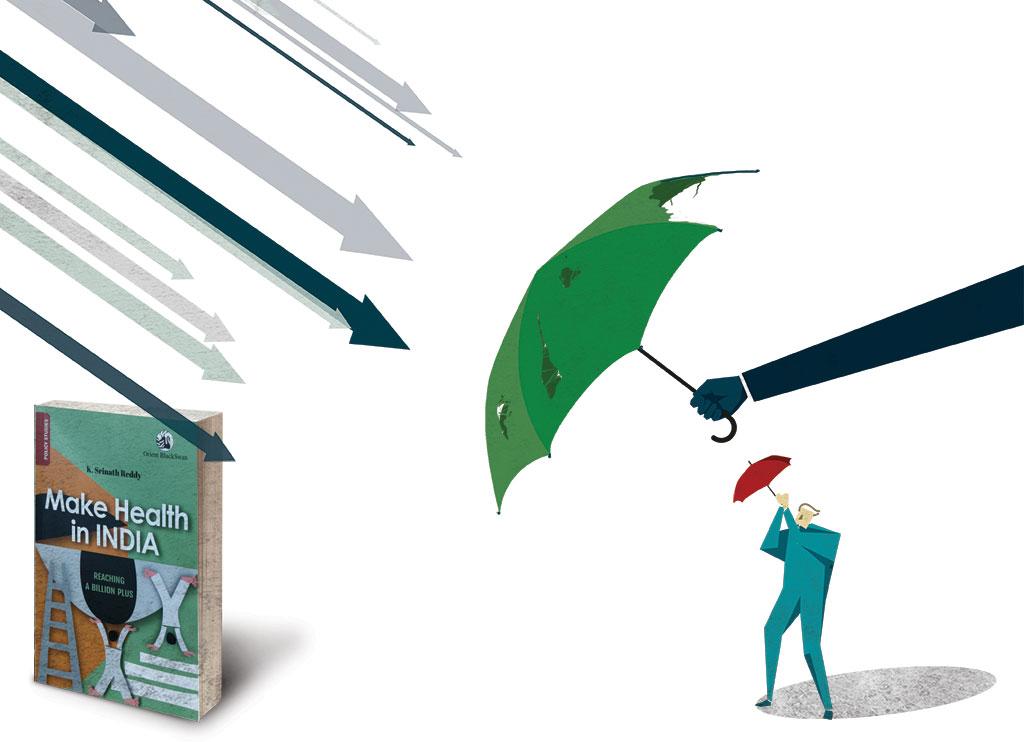 Newspaper headlines such as ‘India to be world’s third largest economy by 2030’ are otherwise heart-warming, but the country’s poor health indicators surely dampen the euphoria. Some health indicators are, in fact, so poor that the prediction of an economic glory looks like a bundle of contradictions.

Make Health in India: Reaching a Billion Plus, written by K Srinath Reddy, president of Public Health Foundation of India, is a timely reminder of India’s challenges in the health sector. Reddy was also the chairman of a high-level expert group on health constituted by the erstwhile Planning Commission in 2010. This book, first in the series of Policy Studies, examines the country’s health sector since the 1990s.

It takes off with a chapter on some hard data. Mostly, when data on various health indicators are reported, especially when it shows an improvement in the overall numbers, the point of inter-state variations gets sorely missed. Life expectancy at birth, for instance, improved in India from 59.7 years in 1990 to 70.3 years in 2016. However, women in Uttar Pradesh have 11 years lower life expectancy than their counterparts in Kerala. Similarly, the under-five mortality rate reduced dramatically from 1990 to 2015.

But there was a four-fold difference between the highest in Assam and Uttar Pradesh compared to the lowest in Kerala in 2016. Obviously, this calls for a need to push policies that are tailor-made for specific states.

Immunisation rate in India is woefully poor at 62-64 per cent while many countries in south and sub-Saharan Africa, despite their much lower levels of economic development, have over 90 per cent coverage. The incidence of diseases caused due to poor water and sanitation has declined, but the burden is still 40 times higher than China.

Not surprisingly, 55-63 million people in India have been pushed to poverty over the past decade because of out-of-pocket expenditure on health as families spend 10-40 per cent of their income on health.

According to the World Health Organization, out-of-pocket expenditure should not exceed 15 to 20 per cent of the total health expenditure. “To achieve that even in stages, India must aim to bring it to 50 per cent or lower as first step,” reads the second chapter. This would require 5 to 6 per cent of GDP.

The Centre-state tussle over increasing their health budgets has intensified with the Niti Aayog asking states to double their contributions. At present, one-third of the total public health spending is borne by the Centre. Till now, the Centre has not shown any inclination to substantially increase the allocation. Niti Aayog has already upset health experts by proposing to hand over district hospitals to private medical colleges in public-private-partnership mode. Reddy calls it the “partnership-for-private profit” model.

A full chapter deals with the inaccessibility of medicines. Out of 55 million who became poor due to healthcare expenditure in 2011-12, as many as 38 million were impoverished because of spending on medicines alone. India is known as the producer of inexpensive drugs and is recognised as “global pharmacy”.

Then why this paradox?

The book provides the answer: “While the low purchasing capacity of a large segment of the Indian population may be a contributing factor, the main reason is that many drugs in India are priced higher than they should be. While a reasonable level of profit is acceptable, high mark-ups over the manufacturing cost makes the drugs costlier than they need to be.”

Addressing the Ayushman Bharat scheme, the book details the upgradation of health sub-centres to health and wellness centres (HWCs) on the one hand, and providing insurance cover of Rs 5 lakh per annum to 100 million people under the Pradhan Mantri Jan Arogya Yojana (PMJAY).

“While the activation of HWCs is welcome, but the budgetary allocation to the National Health Mission (which covers rural and urban health missions) in 2018 and 2019 does not reflect the commitment to boost rural primary healthcare to the level needed. It is also disappointing to see that the Urban Health Mission component has been virtually ignored in these budgets,” writes Reddy.

One major gap in PMJAY is that although substantial rise in cost coverage compared to previous insurance schemes may reduce the levels of health expenditure, it will not impact out-of-pocket expenses since outpatient care is not cove-red. That ironically forms the bulk of the out-of-pocket expenditure problem.

“In absence of effective primary health services, the uncontrolled demand for services under PMJAY will drain the health budget, and in turn, reduce the funds available for primary care and public sector hospital strengthening,” the book states.

Shortage of healthcare providers can debilitate the health system. To address this, the book recommends creation of a National Commission for Human Resources in Health to provide overarching help to all categories.

For tackling the “maldistribution of doctors”, Reddy recommends establishment of a National Medical Service which should recruit fresh graduates in rural areas, post-graduates in district hospitals, and create a permanent cadre of specialist doctors on the lines of Indian Administrative Service.