A Himalayan Sell Out 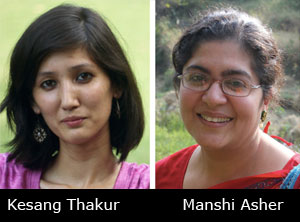 The development juggernaut has gained new momentum with the Narendra Modi led BJP government assuming power. There is a new vigour to steam rolling policies, laws or regulatory mechanisms, seen as a threat or obstacles to economic growth. It then, seems rather absurd when the party fuelling this engine at the centre, cries fowl when the Congress led government of Himachal Pradesh carried out a significant amendment in the state’s hydropower Policy in March 2014. The notification does away with a series of No Objection Certificates (NOCs) or clearances required from several state-level departments including the panchayats for setting up hydropower projects. There was no public announcement of this notification until the opposition leader and former Chief Minister Prem Kumar Dhumal raised the matter claiming the move would lead to private companies plundering state's natural resources. This opportunistic and pretentious posturing by the BJP chief in Himachal managed to draw much needed attention to a critical shift now taking place in the state’s hydropower policy regime.

Himachal Pradesh’s hydropower policy was officially formulated in 2006. While there were some minor changes in the policy in the past few years, the March 2014 amendment marks a prominent shift. The 2006 policy required hydropower producers to obtain a series of NOCs from several state level departments including the Irrigation and Public Health department, Revenue, Fisheries, Public Works Department, and Wildlife and Forests. These clearances were applicable to all projects, irrespective of size or capacity. Thus, most small hydropower projects, those of 5 or less than 5 MW capacity, had to obtain these departmental clearances. As with most environmental clearance process in the country, these clearances too, though mandatory, turned out to be formalities. That only a few projects have been cancelled or shelved because of denial of a departmental NOC is testimony to the fact that environmental clearances have become formality.

The failure of this regulatory regime is apparent in the extent of impact of hydropower projects, both on the people and environment. Himachal today is the premier hydropower state of the country: it has already developed around 8432.47 MW out of its total identified potential of 23,000 MW. A cascade of bumper to bumper projects in the major river basins of the state, Ravi, Sutlej, Beas and Chenab, involving construction of dams, power houses (underground and on the river bed), colonies, roads and most importantly tunnels are under various stages of planning, construction and commissioning.

The larger projects across Himachal, have thrown up a series of issues ranging from deforestration; impacts of blasting on local water sources and geology; adverse impacts on riverine ecology due to tuneling of rivers and loss of natural resource based livelihoods. Almost, 11,000 hectares of forestland in the state has been diverted for hydropower projects and transmission lines since 1980.

The small hydropower projects have been touted as environment friendly. But there are several cases in the state where local people have fought these projects tooth and nail. These include the Hul Hydropower project in Chamba or the Haripur Nallah project in Kullu. The fact that small hydros have resulted in “unmitigated negative impacts, ranging from disruptions to local irrigation systems, water powered mills, and undermining of fisheries based livelihoods” was authenticated in a recent paper by J Mark Baker. His extensive research of all 49 completed small hydroprojects in Himachal Pradesh proves that small hydros are not environmentally benign.

In such a scenario it was essential that small hydro be subject to departmental clearances. Departmental officials themselves viewed NOCS as a critical mechanism to hold power producers accountable. This became apparent in a series of interviews we carried out with the government departments at the tehsil level. A PWD official in Kangra District cited several examples where the department imposed fines for violations of NOC conditions.

The recent policy exemptions also negate the impacts of hydropower projects on fish fauna and heavily undermines fisheries based livelihood in the state. According to department officials, in Kangra district alone, over 2,000 people are official (fishing) license holders. “Absolute lack of bare essential flow of water and the cascading effect of hydropower projects on the same stream have pushed several fish species to the brink of extinction,” says K B Ralhan, President of the Himachal Angling association. In case of the Fisheries department, granting an NOC meant conducting an impact assessment through a detailed survey of a river stretch by a joint inspection committee with local officials from departments like IPH and Himurja. According to the Director of the State Fisheries Department, Bilaspur, “This study helped us assess the likely impact of a project on the fisheries sector”. It is unfortunate that despite this understanding, the department has found itself helpless in the face of political pressure.

Baker's study (mentioned earlier) also speaks of the importance of such clearances in context of the Kuhl irrigation systems in Kangra district. Baker notes that “ensuring the continuity of these kuhl irrigation systems is reflected in the language of No Objection Certificates that project developers must obtain from Irrigation and Public Health Department as well as Panchayat Pradhans.” These NOCs secure rights to full compensation by project developers in case of disruptions or damages incurred during the project construction phase or when the project is operational.

An IPH official in Kangra District adds, “It's only when local people create some noise or threaten court action, the department intervenes. Like in case of 1 MW Changer Vidyut Kranti project on Lower Baijnath Kuhl. The amount of water released from the project’s tail race to Lower Baijnath Kuhl was inadequate for irrigation, following which farmers raised the issue with the IPH department. But, the dispute is still ongoing.” It seems clear that the powers vested with the local officials, makes it convenient for the affected people to report violations and demand accountability.

The 1 MW Chor Nallah project in Distict Manali makes for another strong case. The copy of termination letter received from Himurja through RTI received by Himdhara Environment Collective reveals the company's failure to acknowledge people's indispensable rights over Chor Nallah’s water. The company obscured the fact that the project's intake point fell in another panchayat, and initiated construction activities in absence of its NOC. To safeguard their rights, the locals collectively raised their objections with the District Commissioner at Kullu. A Joint Inspection conducted found the company guilty, and subsequently the project was cancelled in August 2012.

The case of Chor Nallah and the others need to be looked in light of the recommendations of the state level committee which have not only diluted the powers of the department in order to facilitate 'quick' implementation of projects but also limited the scope of the local Panchayat consent.

The HPERC committee report: The precursor

Even when the committee was formed last year by the Himachal government, several reports were floating in the media around this time about delays in the implementation of hydro projects. It was clear the body intended to address the “woes” of the small hydro developers. In November 2013, the committee released its report titled, “Report of Committee on Expeditious Harnessing of Small Hydro Power Potential in Himachal Pradesh”. The conditions under which the committee was formed and the title of the report are probably enough to reveal the nature of recommendations.

Terming the process of clearances such as NOC's as “arbitrary, unconstitutional and obstructionist,” the committee gave 25 recommendations, nine of which pertain to alterations in the clearance procedure by a series of state departments. (See Table: Key Changes). These blanket recommendations are based on the assumption that delays in departmental NOCs are a major reason for dismal small hydropower execution in the state. However, in the entire report there is no analysis or even a single illustration to support this basis. This is not suprising since the committee had only one local representative (Up Pradhan, Kafnu Panchayat, Kinnaur) and no consultation was carried out in regions/districts where these projects have been implemented. There was no call for public comments on the report by the Government of Himachal Pradesh. Strangely, while the committee set up to make recommendations in relation to small hydro projects, the notification inconspicuously includes the big hydropower projects too within its ambit.

Environmental groups and NGOs in the state, who are demanding an immediate roll back in the policy change, stated in their submissions to the Chief Secretary: “Out of the 15 members of the committee, about 6 were power producers, and included representatives of Himurja and private power producers association. There is a clear conflict of interest here”. In fact, important state departments like the Department of Science, Technology and Environment, Forest Department or any non-governmental, independent persons found no place in the committee. The legal validity of the recommendations has also been questioned. In the departmental interviews we conducted, most officials were clueless about the report. Uncertainty prevails as far as the new process to be followed by the IPP's on the ground is concerned.

On the role of Gram panchayats, the committee now recommends effective “consultations” and a single joint inspection clearing all aspects of the projects for statutory clearances as opposed to two NOCs which were earlier sought – one at the initial stage and after signing of the Implementation agreement. These amendements would have critical consequences particularly for Scheduled Areas like Kinnaur, Lahaul& Spiti and Chamba, says R.S Negi of Him Lok Jagriti Manch, Kinnaur, “We have been stressing on the importance of the gram sabha NOC instead of a Gram Panchayat one. This new provision further reduces the scope of meaningful participation of local people by changing the terminology from “consent” to “consultation”, and hands over the decision making power to the DC”.

Groups have termed the new notification as unconstitutional because it undermines the role of Panchayats and a clear violation of the 2006 Forest Rights Act and 1998 PESA Act (for tribal areas), which protects the democratic rights of Gram Sabhas by making their NOC mandatory for any such development activities. But the Chairperson of the committee, Subhash Negi, also Principal Secretary (Power), was clear when questioned about the impacts of new amendment on local people's rights', “The state government has the prerogative in deciding how water as a public resource will be utilised”.

That local opinion, especially dissent, is increasingly being seen as intolerable is apparent in another order of the Directorate of Energy issued on July, 2014. The notification issued to district administrations and superintendent of police across the state, orders provision of adequate security to project proponents. The perceived threat is from “local vested interests” obstructing the construction work for several hydro projects. “Since the project proponents have entered into an agreement with the state, it's their fundamental right under Article 19 of the constitution to carry out the business of execution” states the notification. In its enthusiasm to protect the fundamental rights of the power producers, the Himachal government seems to have forgotten Article 21 enshrined as a fundamental right in the Constitution - the Right to Life.

The writers are members of Himdhara, Environment Research and Action Collective based in Himachal Pradesh