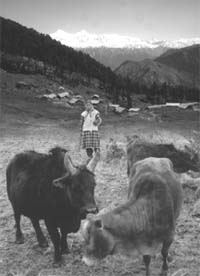 recently, the world has witnessed an upsurge of events on biodiversity-related issues. Existing trends of depletion of natural resources, the steady loss of a number of important biodiversity elements and the alarming rate of population growth -- especially in the developing countries -- are major concerns. All these issues echo the threat to life support systems on this planet.

As a mega-diversity country, the scenario in India is no different. Biodiversity is so widely discussed that it is increasingly being recognised as a national asset of paramount importance for sustenance of life. Academic institutions, non-governmental organisations ( ngo s) and environmental activists are major players in promoting and undertaking research.

Among the biodiversity-rich areas in the country few are better known than the Himalaya. But, despite putting together a biodiversity-related knowledge base during the pre-Independence period, comprehensive documentation on the status and knowledge of biodiversity in the region is missing. With the reorganisation of university departments and the Botanical ( bsi ) and Zoological Survey of India ( zsi ) in the post-independence era, survey and exploration work was strengthened and extended. The activities continued with a specific goal of preparing and updating enumeration lists of plants and animals till the late sixties.

In the early seventies, ethnobotanical studies emerged as an offshoot of taxonomic research. The All-India Coordinated Project on Ethnobiology was a significant step towards documenting knowledge on ethnic and indigenous uses of plant species. The two following decades saw the identifying of rareties in flora and fauna. The phase of listing threatened plants and animals on the basis of World Conservation Union ( iucn ) categories was a refreshing change in approach. During the period several publications also came up, significant among them being the three-volume Red Data Book of Indian Plants.

The 80s can be described as a watershed in the development of biodiversity research in the Himalaya. The period noticed a resurgence of interest in ethnobiological studies and growth of research interest in collecting and updating information on medicinal plants used in the Indian system of medicine. It was the first time that uniqueness of endemic plant and animal species in the region was recognised.

Our mindset is gradually responding positively to the present scenario. The number of meetings, conferences, symposia and seminars organised on biodiversity reflects this intensity. And as the issues on biodiversity are heard loud and clear, attempts to integrate taxonomic and ecological studies, concern for collecting location specific data and prioritising strategies, sites and species are gaining ground. Also, a beginning has been made to assess and monitor biodiversity at higher organisational levels using contemporary tools of Remote Sensing ( rs ) and Geographical Information System ( gis ).

We are all aware that data available is inadequate. Therefore, it should be our endeavour to build on these building blocks, be it taxonomic, ethnobiological, ecological or economic and organise the data sets in a standardised format compatible with global formats. The information thus generated should be made available to the users through networking.

As we enter the new millenium, biodiversity has to be looked at on a broader canvas. Conceptually, biodiversity is steadily but surely evolving from a static mould to a dynamic reality. Rethinking on the subject matter is the need of the hour. Till date, the focus of attention has been at the species level. Practically feasible conservation initiatives are possible only when interactive mechanisms to maintain diversity are thoroughly understood. For this, we need to promote studies at higher organisational levels, such as communities, biomes and ecosystems. This will help a great deal in identifying keystone elements. We cannot afford only to talk about them. Further, a uniform and predictive methodology has to be adopted for assessing and monitoring biodiversity at various spatial scales.

Healthy inter-institutional competition for improvement should be welcomed. However, coordination and complimentariness should accompany this. Public-funded institutions have to depend on the inputs of ngo s and vice-versa. Likewise, thorough awareness campaigns targeting traditional institutions and environmental activists have to be increasingly involved in biodiversity-related programmes.

We have lost time. If we cannot take corrective measures swiftly we might loose important biodiversity elements. This will not happen overnight. It is only the beginning.

The author is a scientist with the G B Pant Institute of Himalayan Environment & Development at Almora, UP