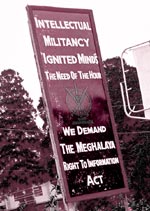 WHAT separates Punjab from Nagaland and makes them alike at the same time? Our visionary bureaucracy. Nothing else can explain why the Union government wants to slap a facsimile copy of the fiscal and economic policy pursued in Jammu Kashmir, Punjab and Haryana onto the eight northeast states.

The government offers sops -- tax waivers and subsidies -- to the eight states that are similar to the three hill states of Uttaranchal, Himachal Pradesh and Jammu and Kashmir. Quite obviously, the investments (perpetually seeking cosy, profitable and less risky zones) have begun to drift towards the latter three. The government realises this. It now wants to push, in the same way, for agro-forestry, horticultural, forest and milk-based products in the eight northeast states. The claim is to focus on developing an industry built on the substratum of natural resources. Isn't this what we all want?

The government will help build factories that source raw material from the states' local environment. Trade with Southeast Asian countries will open. There is to be a port in Myanmar. Government believes trade will flourish, consequently flushing the region with cash. This money will then trickle down to the poorest in the region. (The Prime Minister's office also hopes this will get the ruling party a few more of the 25 Lok Sabha seats from the region.) But have we not tried -- and failed -- with trickle-down in the rest of the country? But it's the last link in this chain that will break, as it invariably does: the riches will not be shared with the poor, unless it is the poor that generate it. It is relatively easy to invest in a subsidy-hungry factory that draws raw material from the local environment. But it is far more laborious to construct a growing economy on natural resource-based livelihoods.

If the northeast states are to attempt this onerous task, they will have to work on two imperatives. One, break the stronghold of the few influential interests that today command agriculture, forestry and horticultural produce markets in the region. And two, reconstruct a governance system that weds customary practices with the needs of a connected economy. Only an intellectually militant northeast can deal with the new economy. Does our government possess the imagination to inaugurate this process?