A ban on common sense

Various restrictions imposed to protect the environment at Nanda Devi in the Himalaya have disturbed the rural lifestyle and economy, doing little to conserve the ecology 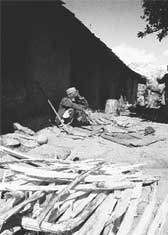 the existence of flora and fauna at Nanda Devi Biosphere Reserve (ndbr), one of the 14 biosphere reserves in the country, is threatened.

The biosphere reserve, situated in the northern part of the western Himalayas, is home to a number of rare and endangered species, both flora (Aconitum balfourii, Podophyllum bexandrum, Nardostachys grandiflora, Taxus bacatta and many more) and fauna (Moschus moschus chrysogaster, Panthera uncia, Pseudois nyaur, Hemitragus jemlahicus, Lophophorus impejanus , among others).

The destruction of flora and fauna by unauthorised herb collectors and poachers led the government to give it the present status of biosphere reserve in the year 1988. In 1992, it was given a special status of a World Heritage Site.

The very fact that a lot of illegal poaching and extraction of medicinal plants goes on unhindered, right from the core zone of the biosphere reserve, points a finger at the loopholes in the management plan of the ndbr . The problems faced by the villagers include non-availability of grazing lands, prohibition of collection of non-timber forest products, ban on expeditions or mountaineering within the biosphere reserve, restrictions on removal of dead logs from van panchayat forests, a ban on collecting medicinal plants from the reserve, and damage to crops, fruit trees and houses by wildlife.

The area was first explored by two famous mountaineers, Eric Shipton and Tilman in 1934. It was declared a sanctuary in 1939. The post-independence era saw a rush of mountaineers in pursuit of the high peaks - Nanda Devi, Trishul and Dunagiri. This led to serious destruction of both flora and fauna, forcing the government to undertake remedial measures. In 1982, the whole catchment area was declared a national park.

The United Nations Educational, Scientific and Cultural Organisation (unesco) under its Man and Biosphere programme (mab) introduced the concept of biosphere reserves in 1973, focusing on three essential features, namely, conservation of ecosystem and genetic resources; promotion of research, training and environmental education; and support of development of local economies and the people.

However, a recent visit to the biosphere reserve and interaction with the village folk revealed that at least the third objective, relating to human beings, has not been given due importance.

The ban on expeditions and inclusion of local grazing lands in the core zone have affected the villagers whose avenues of employment have been limited. Also, no alternative provisions for their sustenance have been provided. The situation got worse with the promulgation of Nanda Devi National Park as a biosphere reserve in 1988.

The villagers face a precarious situation. On the one hand, reduction of grazing lands has resulted in overgrazing of the few available pastures and, on the other, the local people have been forced to reduce their livestock as adequate grazing land is not available. This, in turn, has given rise to a plethora of problems. It has resulted in a reduction of wool production which has already affected the conventional crafts. According to village elders, forests were better conserved and protected before the creation of the national park and biosphere reserve. They cite the Chipko movement as an example of the ecological awareness of locals. Ironically, Reni - where the movement originated - is located in the area and is one of the villages affected by the creation of the biosphere reserve.

Prohibition of mountaineering expeditions and trekking to the peaks is a panacea, not a cure. Stringent penalties should be imposed on those who denigrate the environment.

The cultivation and use of medicinal plants has a great potential for employment generation in this region. The locals are not familiar with high-sounding terms like biodiversity, conservation and sustainability, but they certainly know the immense significance of forests, wildlife and medicinal plants.

The goal of sustainable development can be well achieved if a symbiotic relationship with nature is developed. Any conservation strategy will thus have to take into consideration this human aspect. Negating it will just prove to be an exercise in futility.